One of the many reasons that Fortnite has become a pop culture juggernaut is player’s ability to customize how their character looks in-game.

While players start the game with a set of basic skins, new characters and items can be unlocked by completing in-game challenges through either the paid or free versions of the Battle Pass, or can be purchased from Fortnite’s built-in store.

Epic Games updates the store daily, meaning that new and exciting items are always there for players who like to change their appearance regularly, while also bringing back fan favorites to give everyone an opportunity to grab them.

With Season 6 drawing to a close, Reddit user HazzaSquad has put together an amazing graphic which shows all 62 skins added to the game during the season, splitting them into categories based on the rarity.

Included in the list are is the Legendary rarity Calamity skin, which was the first unlockable skin in the paid version of Season 6’s Battle Pass, alongside the A.I.M. robot character, which players earned by completing seven weeks worth of Hunting Party challenges.

The special edition NFL skins, which allowed players to choose which team’s uniform they wanted to wear in-game, also make an appearance. Four skins that were leaked from Fortnite update files but never released are also there, including the Onesie skin that was spotted in the Week 10 Hunting Party loading screen. 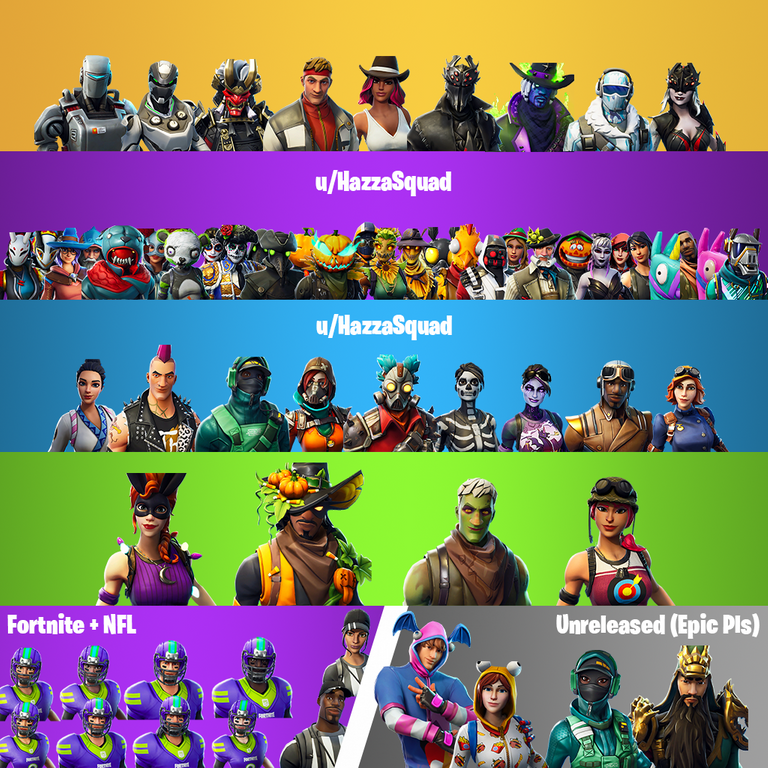 A look at all 62 Fortnite Season 6 skins.

Even though Epic Games added 62 new skins to the game since Season 6 began on September 27th, Fortnite fans have still been using their creativity to design new characters they would like to see.

One budding Fortnite player designed a skin called the Tender Defender, which Epic Games then added to the popular battle royale title much to the delight of the young creator.

With Season 7 just around the corner, who knows what crazy and awesome skins we might see from Epic Games over the coming weeks.