The v7.40 update for Fortnite Battle Royale finally went live on PC, PlayStation 4, Xbox One, Nintendo Switch and mobile on February 14. Here’s everything we know about the Infantry Rifle, Crossbow, Zipline changes and all other tweaks in the latest patch!

A good amount of information relating to the v7.40 update had already been revealed ahead of time thanks to some Reddit posts from Eric Williamson, the design lead for Fortnite.

However, the highly anticipated v7.40 patch was delayed twice. It was first scheduled for release on February 12 before being delayed to February 13. Another unforeseen issue then meant the patch didn’t go live until February 14, Valentine’s day, at around 09:00 GMT (04:00 EST, 01:00 PST). 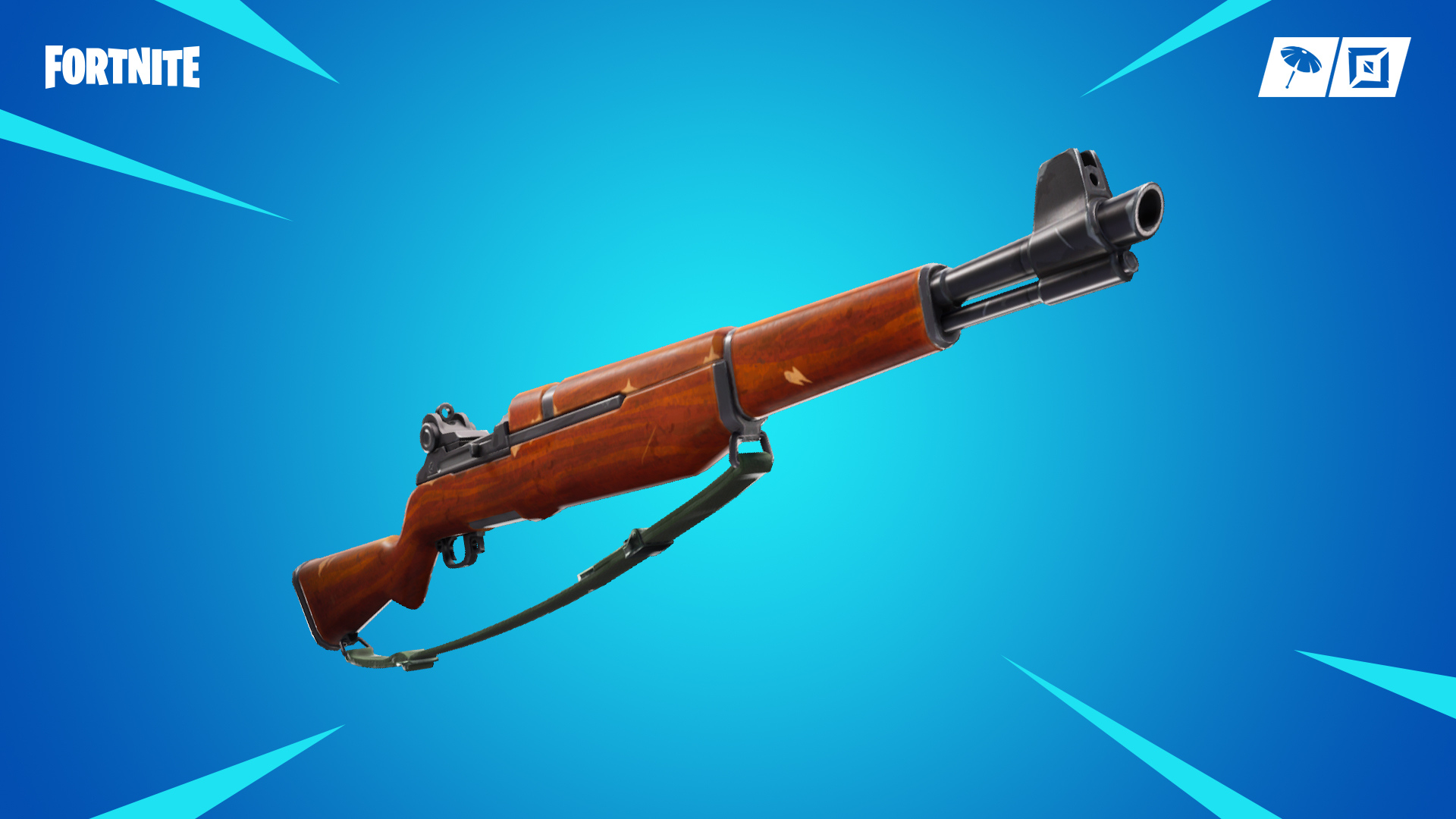 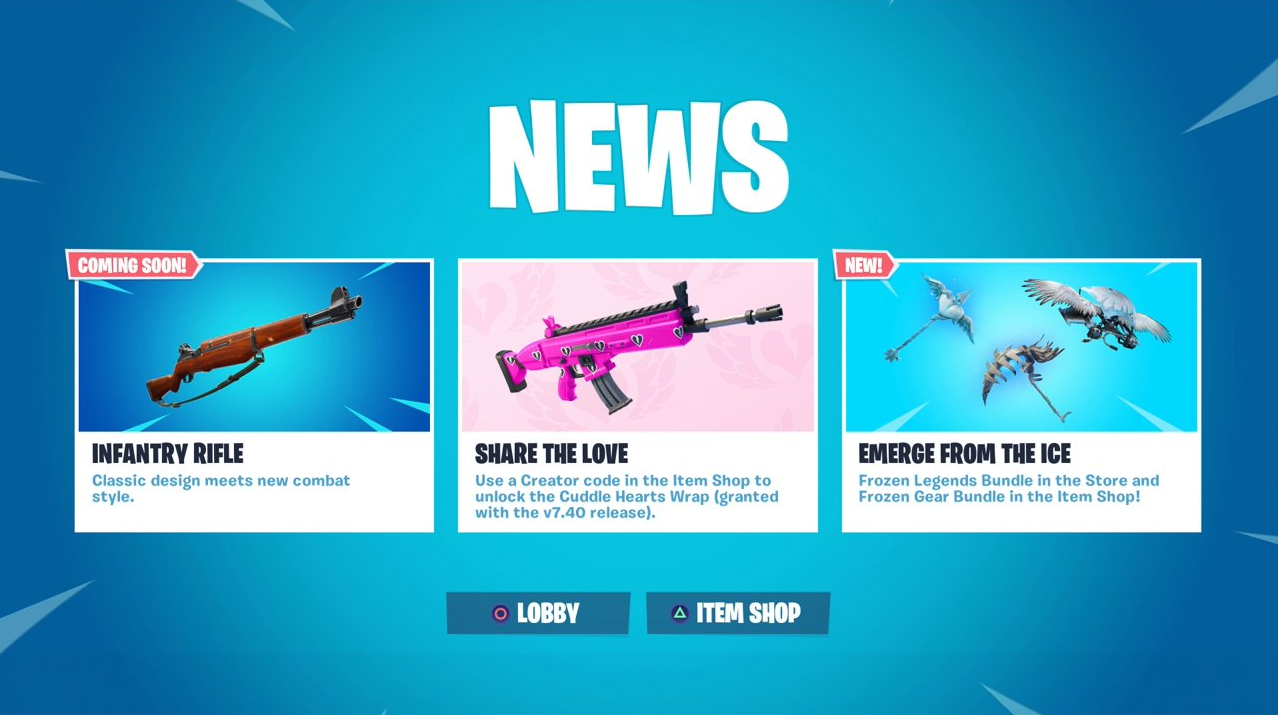 The Infantry Rifle was announced in-game ahead of time.

The old-fashioned looking rifle appears to be based on the famous M1 Garand, but we weren’t sure of its intended use until the notes went live.

Here’s everything you need to know about the new weapon: 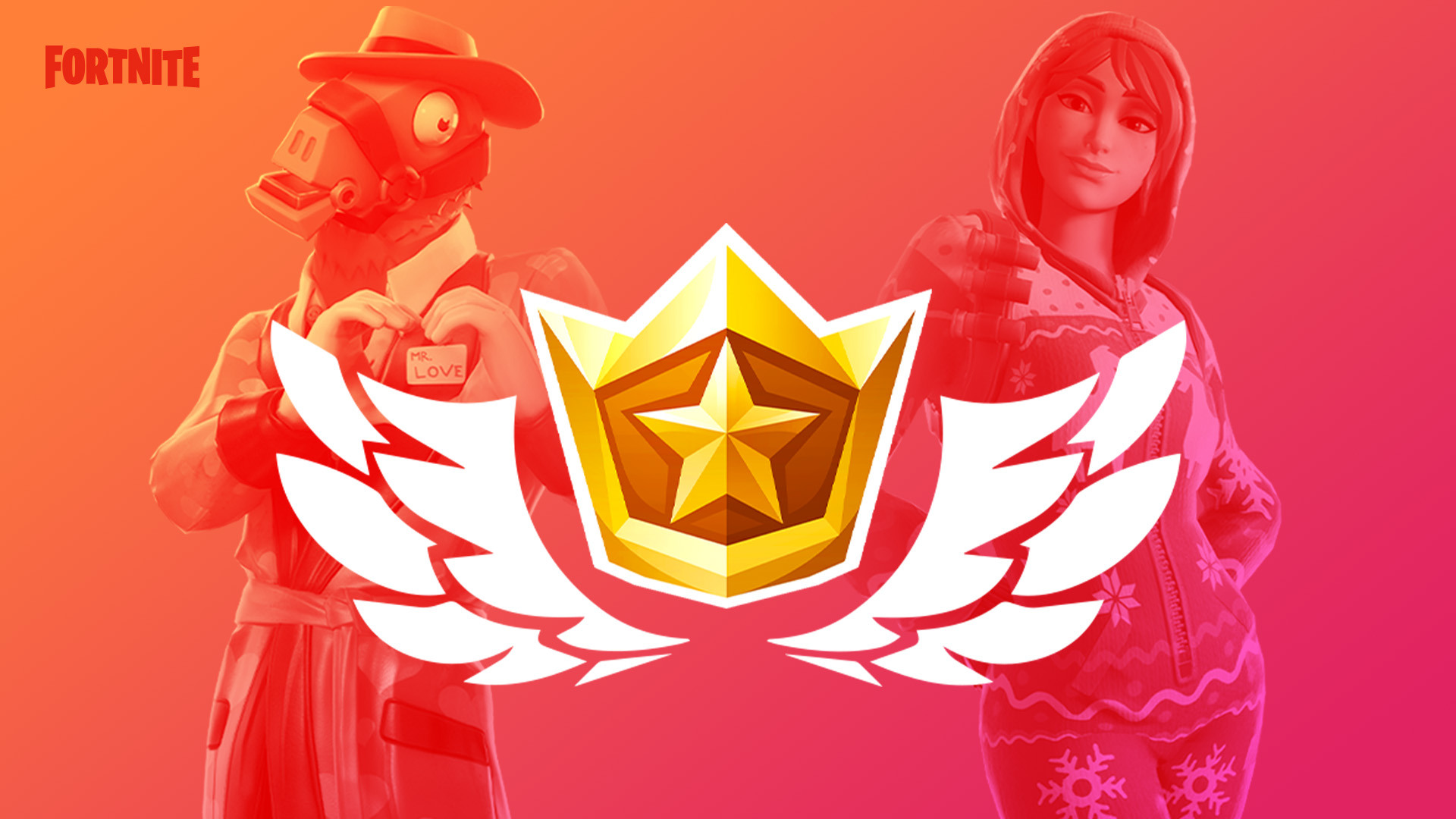 Completing 13 of the free ‘Overtime Challenges’ will earn you a free Season 8 Battle Pass!

The #SharetheLove event just got even better! Valentine’s Day is upon us, and the developers of Fortnite have an exciting gift for all players:

“Everyone who completes 13 free Overtime Challenges by February 27 will receive the upcoming Season 8 Battle Pass for FREE! If you don’t have an outfit, now is your chance to get several for free. With the Battle Pass, you’ll receive two Season 8 Outfits instantly and you can earn up to five more. Save your V-Bucks, this one’s on us!”

Here are the details we have so far:

And for current Battle Pass owners, the Overtime Challenge rewards will include new unlockable styles for the Trog, Powder, and Onesie outfits.

Fortnite fans have been desperate to see some sort of prompt that gives them an option to use Ziplines, or not, while they’re navigating around the map.

In a post on Reddit, Eric Williamson confirmed that this would soon be implemented, making the chance of automatically using one by accident significantly lower: “Zipline interact prompt added, and using a Zipline will grant fall damage immunity.”

Here’s what the February 14 patch notes have to say: 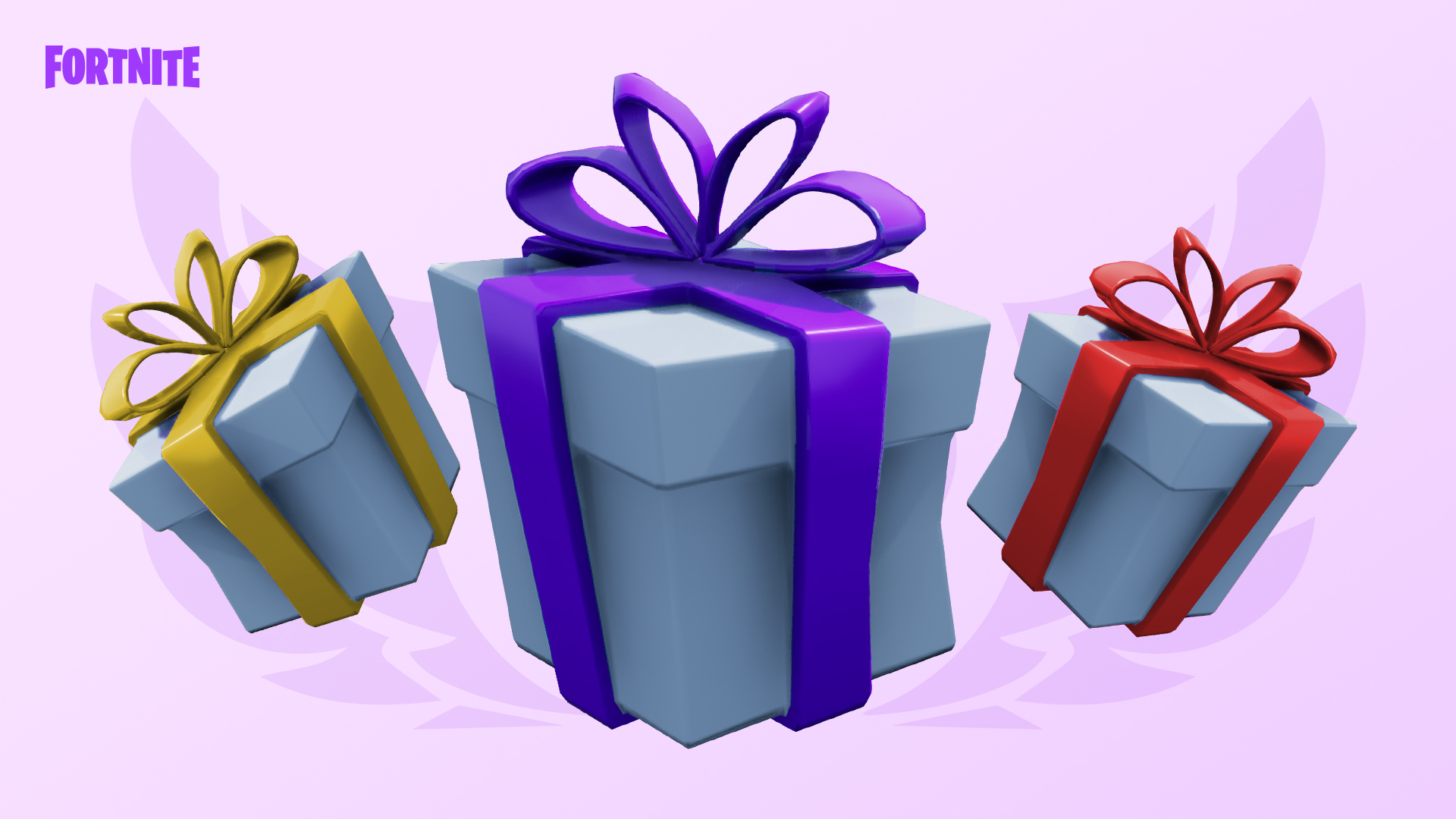 Gifting is back for a limited time.

According to the patch notes, gifting is back in Fortnite for a limited time. It will be available from today until February 22. For Valentine’s day, you can send the Heartspan Glider to your “special someone” for free until Friday, February 15.

While not TECHNICALLY brand new, Crossbows will be returning to the game in time for Valentine’s day on February 14.

“Triumphant return,” read an in-game news message about the Crossbows. “Cupid’s Crossbow will be unvaulted for a limited time. Eliminate your opponents with stealth and precision.”

Here’s everything you need to know: 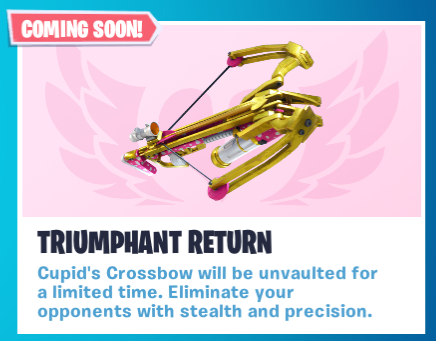 The Crossbow is returning to Fortnite.

After months of complaints about the power of Fortnite’s Hand Cannon from professional and casual players alike, it looks like the incredibly powerful pistols will finally be nerfed in the v7.40 patch – at least when it comes to the damage they do to structures.

Below, you can find out everything that has changed: 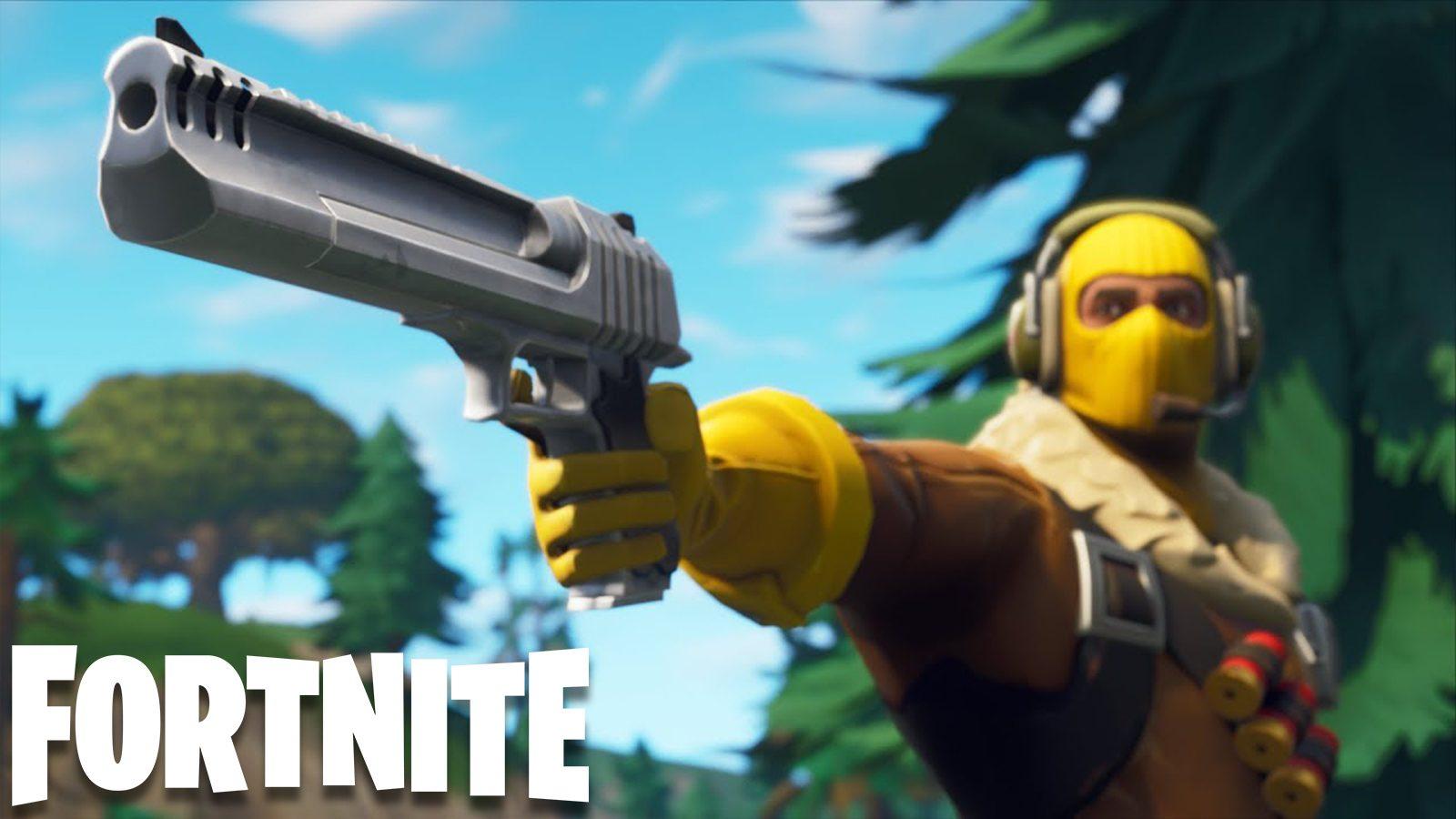 The Hand Cannon will not rip though structures as easily in v7.40 patch lands.

Eric Williamson also confirmed that Rocket Launchers would be receiving some major tweaks in the February 14 patch.

For starters, the powerful explosives will now take significantly longer to reload (increasing from 2.52 seconds to 3.24 seconds). However, the bigger change comes in the form of them no longer being found in loot chests!

Williamson said: “Also worth mentioning we’re making a change to move Rocket Launchers out of chests – though they’ll still be in Supply Drops (and a little more available there than they are now) and Vending Machines.”

Here are the official notes:

The controversial Stormwing Planes once again get a minor nerf in the v7.40 update as they will no longer be able to fly through structures and smash them:

Other new content to look forward to, as always, will be skins and various other cosmetics. We’ll keep you updated with any leaks and information as it becomes available.

The patch notes for the February 14 Fortnite update are pretty lengthy. Here’s everything that wasn’t discussed above:

As mentioned last week, we’re continuing with rotate through LTMs at a faster pace throughout the week moving forward. The first mode is detailed below, check the in-game client on Thursdays and Saturdays to see what other modes are available!

Summary
In this mode, all guns have been removed. The only weapons are grenades and other items that can be thrown or tossed. Get in there and throw the enemies back to the lobby!

Summary
Two large teams fight for the Victory Royale in an action-packed mode where the first team to get 100 eliminations wins!

Improvements to the Bush consumable.