The star pro player was able to earn a total of 12 points, enough to secure himself first place and the $60,000 prize, along with the glory of winning an official Fortnite competition.

The top three were rounded off by his Ghost teammate Saf in second place and Team Liquid’s Vivid coming in third, earning 11 and nine points respectively.

Before continuing on with this recap, it’s important that you brush up on the official scoring format that was used to determine the final placements after the six total matches.

To see the entire list of invited competitors and how they qualified, make sure to visit our Secret Skirmish info hub.

Being that he was one of the favorites to win the event, it came as no surprise when Liquid’s 72hrs claimed Victory Royale in match one.

However, he was only third in the leaderboard at the time as competitive player Armond and Sentinel pro Aspect were first and second with five and four points respectively.

The second match saw Winter Royale standout Pearl take the Victory Royale and boost up 32 spots to take first in the leaderboard.

Competitive player Pate1K also boosted up 30 spots to fourth after getting a whopping six eliminations in the match. Some major names had also sneaked into the top 10 at this point, including the likes of Vivid and Team SoloMid’s ZexRow.

The third match saw the emergence of Saf, who was on the winning team of the $100,000 Duos tournament from the day before.

His Victory Royale propelled him all the way to first place with 8 points, two points clear of the second place Pearl, and three points clear of Pate1K, Vicaros, and Almond, all of whom had five points going into the halftime break. 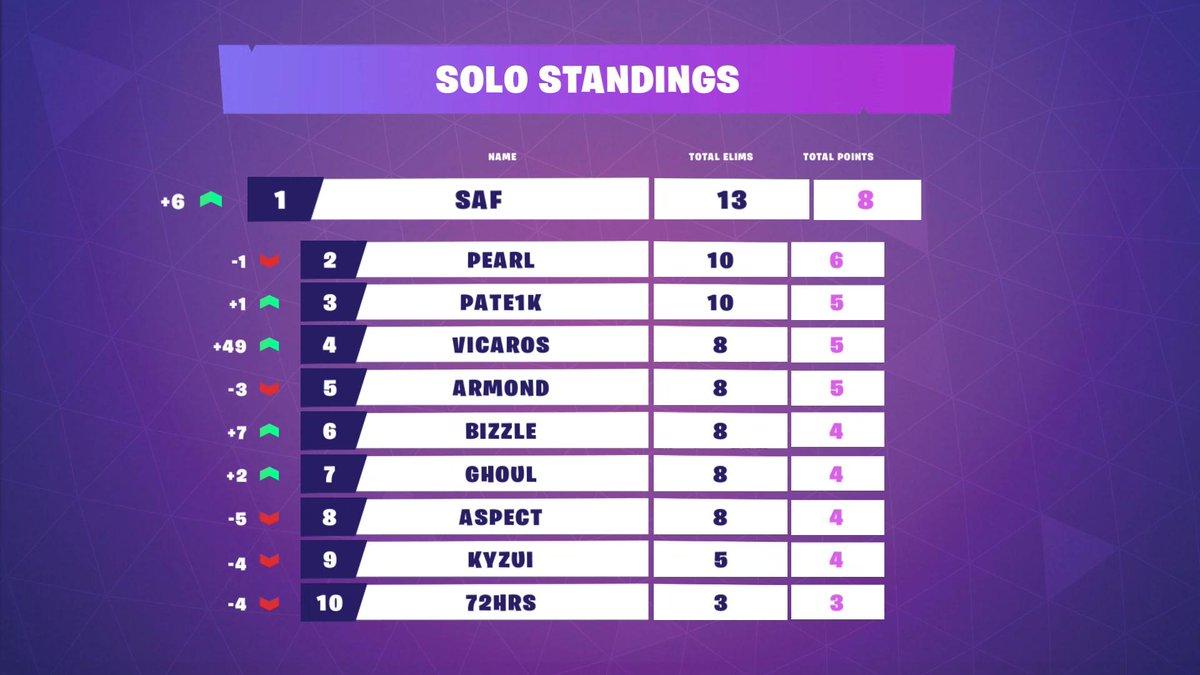 Vivid stepped up his game in the fourth match, taking the Victory Royale and putting in some good work in the eliminations department.

That was good enough to put him in the lead after match four, as his nine points were one better than the eight that Saf and Kyzui had gotten up to that point.

The 16-year old Kyzui especially stood out in that match, getting some clutch eliminations towards the end to push himself all the way up to third place.

Match five saw a considerable shift atop the leaderboard as Saf’s hefty elimination total got him to 11 points, enough to retake the lead from Vivid, who remained at nine.

It was here when Bizzle add himself into the mix thanks to his Victory Royale, and his eight points were good enough for third place, tied with Kyzui going into the sixth and final match of the tournament.

FaZe Clan’s Tfue also made his first appearance in the top ten, climbing up seven spots and into sixth place with seven total points. 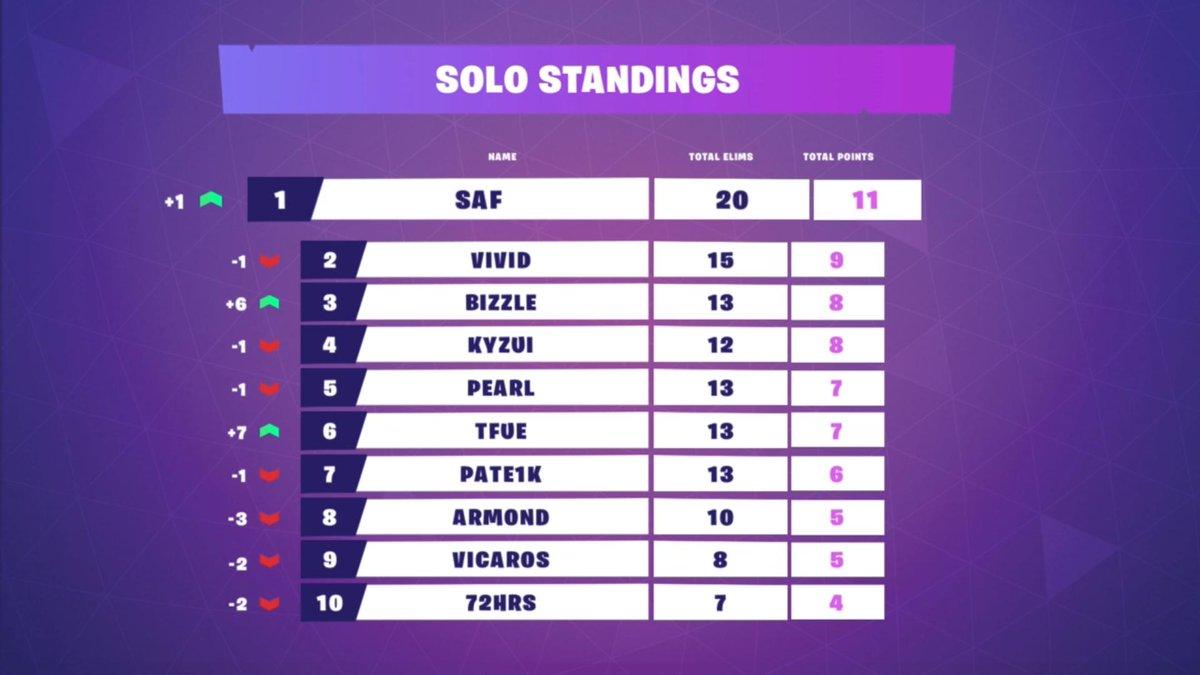 With everything still to play for, the sixth and final match came down to the wire, and it was Bizzle who once again was the last man standing for the Victory Royale.

His incredible performances over the last two matches was just enough to push him over the edge and secure the tournament victory.

With all six matches in the book, these are the final placements for the $400,000 Solos tournament, with the top 20 players getting a share of the massive prize pool.

The full standings for all 100 players, and their total points and eliminations, can be seen on the official Secret Skirmish website. 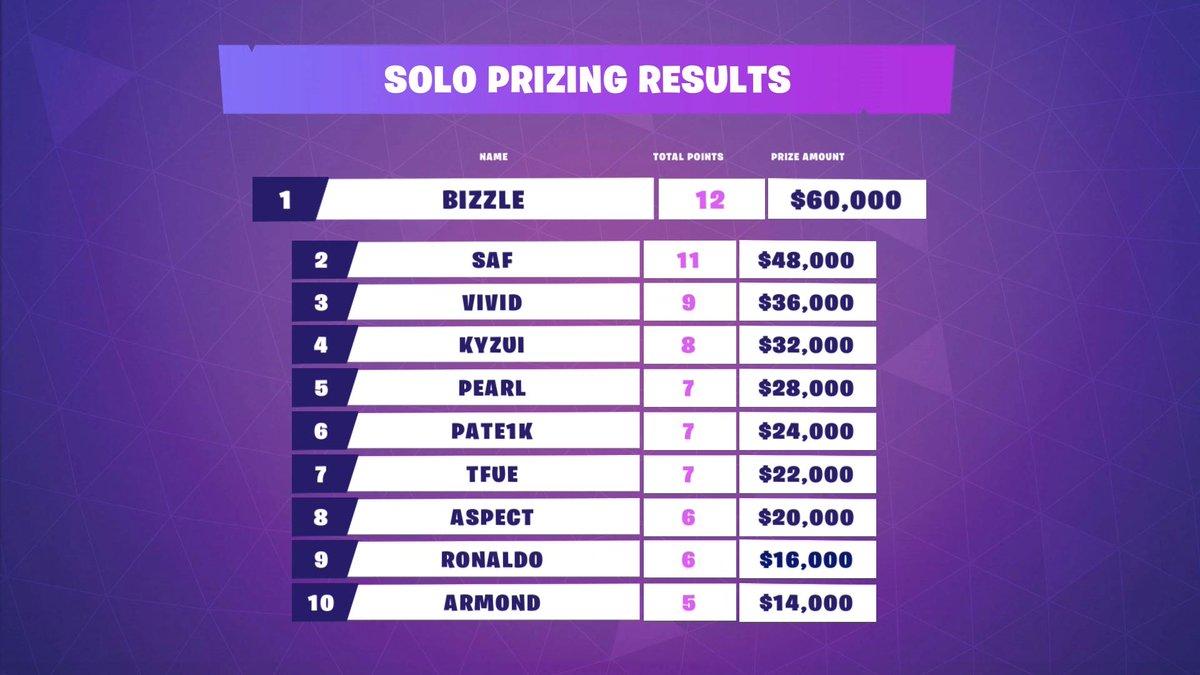 Just a reminder that this was the second tournament played as part of the Secret Skirmish, and you can check out our recap of the $100,000 Duos tournament, held on February 14, which includes video highlights, final placements, prize breakdown, and more.

What are your thoughts and reactions to the Secret Skirmish? Do you believe this tournament cements Ghost Gaming as the best roster in competitive Fortnite? Tweet us your opinions @Dexerto!