Fortnite Season 8 Week 2 Challenges and how to complete them – Pirate Cannons, Furthest Points and more

Fortnite Season 8 is now in full swing, and the week 2 challenges have officially arived, giving players an opportunity to earn Battle Stars as they attempt to unlock more items in their Battle Pass.

As usual, Fortnite fans will have three challenges that are open to everyone who would like to complete them, with a further four challenges only available to players who own the Season 8 Battle Pass.

Once Battle Pass owners complete the seven weekly challenges, they will then unlock a brand new loading screen, which they can use to find the hidden Discovery challenge Banner, which replaces the Battle Star for the second week of Season 8.

@FaZeClan Fortnite pro @Tfue is all about defaults for life, dude.

While the Fortnite Season 8, Week 2 challenges officially went live on Thursday, March 7, we already had an idea as to what we could expect when they released, as data miners were able to leak what appeared to be the new challenges on Saturday, March 2.

It seems Fortnite players will have to be prepared to travel far and wide across the Fortnite map, with a number of challenges tasking players with visiting various locations dotted across the island. 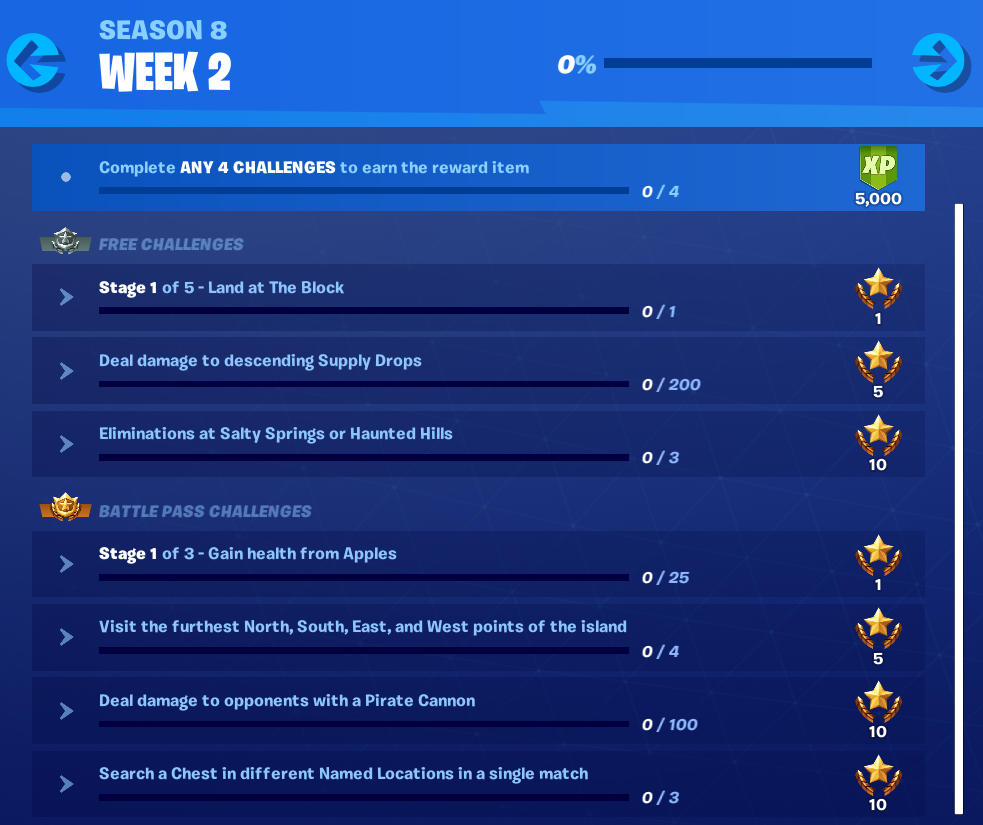 While Epic Games sometimes change leaked challenges before they go live, the challenges for Week 2 remain untouched, meaning players already know what they need to accomplish.

The challenges released around 2:30pm GMT (6:30am PST, 9:30am EST), and here are some handy guides that will help you complete them and earn your Battle Stars.

We’re now into the second week of the Discovery challenge, which replaced the Snowfall challenge that ran throughout Season 7.

Once you’ve finished all seven of the challenges for Week 2, you can head over to our helpful guide that shows you how to find the secret Forntite hidden Banner for Week 2, Season 8.

The first challenge of the week is relatively simple, as players are required to deal damage to a Supply Drop which is descending towards the ground.

If you see a Supply Drop in the sky, grab a weapon and start firing at it, although we don’t know how much damage you will have to deal just yet.

Deal damage to opponents with a Pirate Cannon

Another straightforward challenge, players will need to get their hands on a Pirate Cannon and take aim at opponents. The easiest way to complete this is by firing cannonballs at enemy players, and we’ve put together a handy map that shows where you can get your hands on the Cannons you need to complete this challenge. 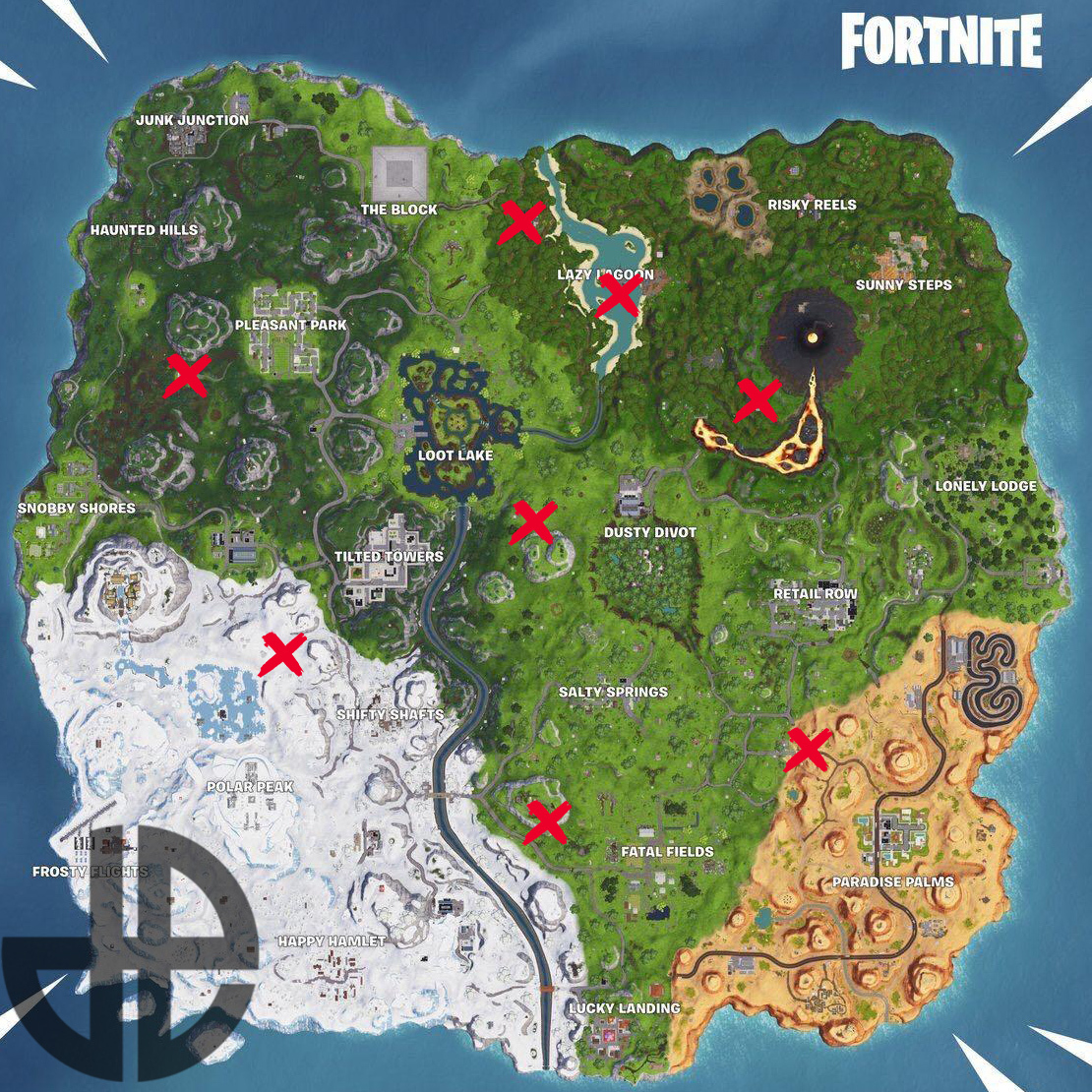 Here’s where players can get their hands on a Pirate Cannon.
[ad name=”article5″]

Again, another easy challenge. Players will need to eliminate players while visiting either Salty Springs or Haunted Hills, although we currently don’t know how many eliminations you need to complete this challenge.

Rather straightforward, players will need to open Chests in named locations such as Pleasant Park or Tilted Towers within a single match. How many chests players need to complete this is currently unknown.

Players will need to find and consume one of Fortnite’s Apples to complete the first stage of this challenge. Apples can be found scattered around the map on the ground, and grant five health points to players.

If you see one on the ground, quickly build a ramp and jump off it so that you receive some fall damage, eat the Apple and the stage is complete. The second stage of this challenge requires players to use a Medkit, which players can find around the map as floor loot, or in Chests and Supply Drops.

Visit the furthest North, South, East and West points of the island

Fairly simple but requiring more travel, players will need to visit
the furthest North, South, East and West points of the island, although
thankfully, you don’t need to do all four in one game. If you’re
struggling to figure out where you need to go, we’ve created a handy map
that shows each point on the map. 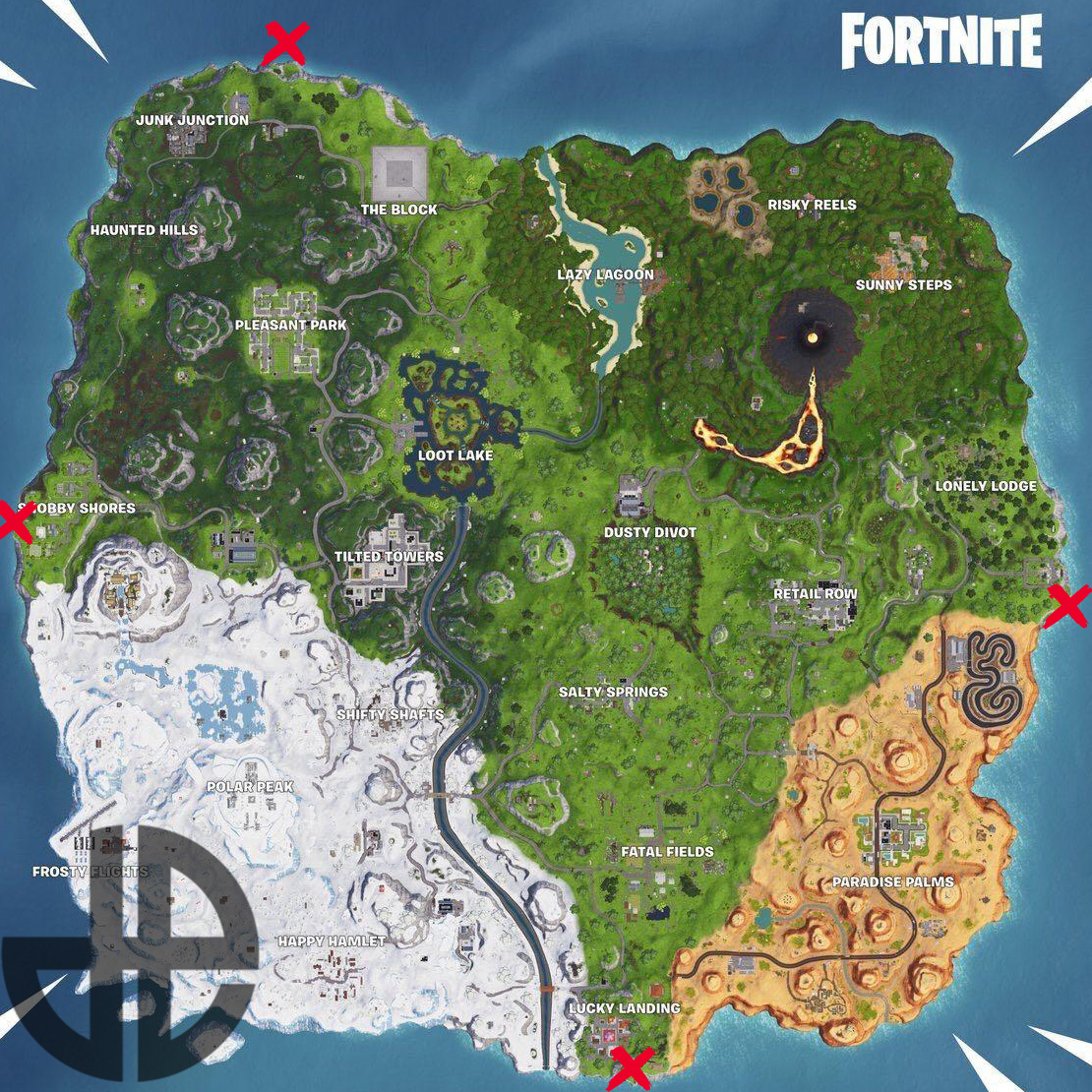 Here are the points you need to visit to complete this challenge.

This post will continue to be updated throughout the day with new guides and more information on each challenge. Make sure to follow @Dexerto on Twitter for all the latest Forntite news.