Week two of Fortnite’s $2,000,000 FNCS invitational event has come to an end, but if you didn’t manage to catch all of the action, don’t worry, we’ve got a round-up of the final standings for every region.

In lieu of regular LAN events like the Fortnite World Cup, the Fortnite Championship Series gives players a chance to test their skills against some of the best players in their respective regions.

Week one finished with a host of new names on the leaderboards, letting the spotlight shine on a few different players. Week two returned with the solos format as players aimed to finish inside the top 80 and put themselves in a position to qualify for the season finals. So, let’s take a look at who finished where.

Top spot in the European region, once again, went to NRG’s Benjy ‘Benjyfishy’ Fish, as he managed to score 371 as well as winning two games and amassing 49 wins.

The young Brit finish 49 points ahead of second-placed Wolfiez, though he did fall some way short of his first-week points total of 452. Benjyfishy’s current duo partner, MrSavage, also managed to squeeze into the top 15, while his fellow Brit FaZe Mongraal managed to finish 20th.

In the North American East region, it was controller player sF Roller who was able to come out on top. Though he finished tied on points with second-placed Furious, Roller managed to win more games and grab more kills.

Week one winner, Team SoloMid’s Commandment, could only finish in 17th place while big names like Bugha and Tfue finished out the top 80 in 100th and 232nd respectively.

Out west in the North American side of things, the glory of finishing in first went to NRG’s EpikWhale after he managed to pick up 344 points. He clearly built on his third-place finish from week one.

The first-week winner, WavyJacob, slipped down one spot to second place – finishing 14 points behind the NRG star. 100 Thieves’ Arkhram also managed to up his game from week one, finishing 11th – missing out on the top 10 by two points.

Outside of the top three regions, there was also action from Brazil, Asia, Oceania, and the Middle East. Victory in Brazil was once again claimed by Frosty, but he was run close by Fortnite World Cup star King.

The Asia leaderboard was topped by CR Qjac with 392 points, Oceania’s victory went to RBK volx as he finished ten points shy of 500. The Middle East top spot went to ASMR Tobi who had 362 points. 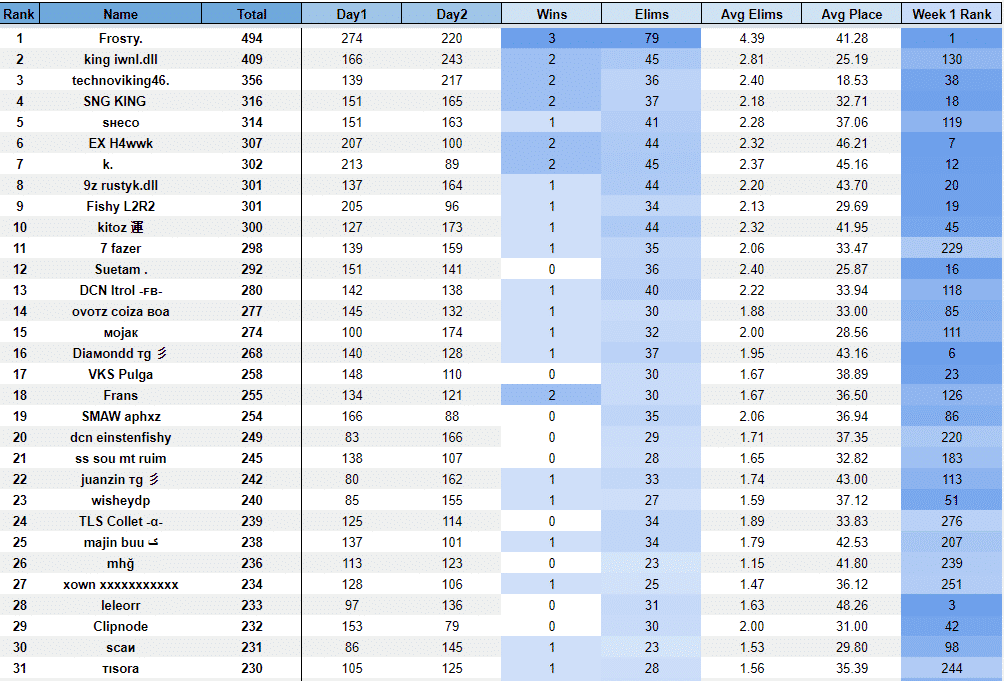 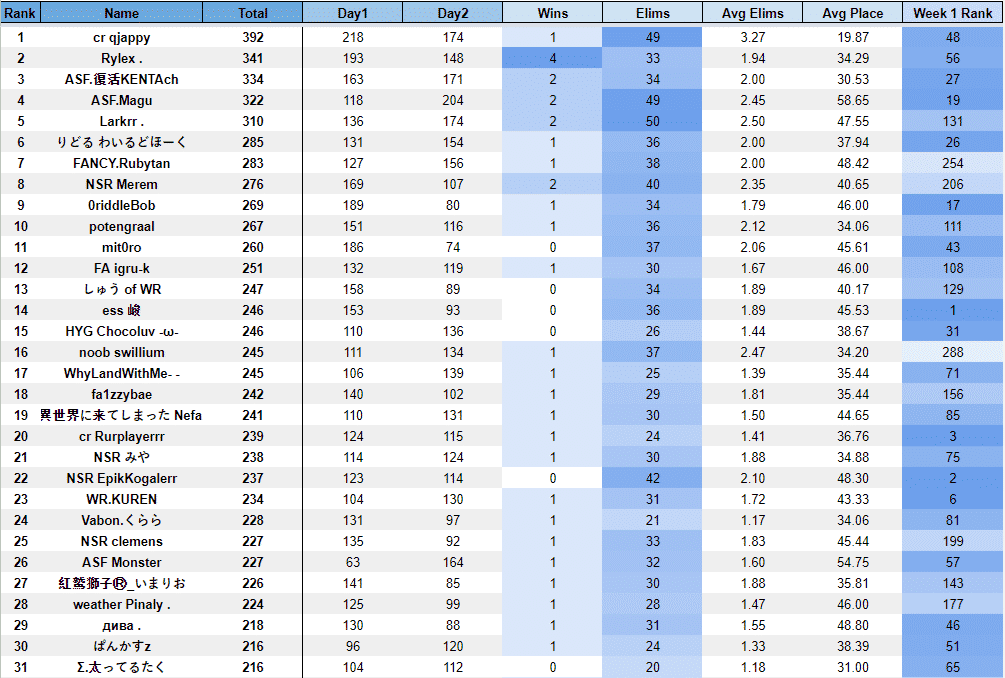 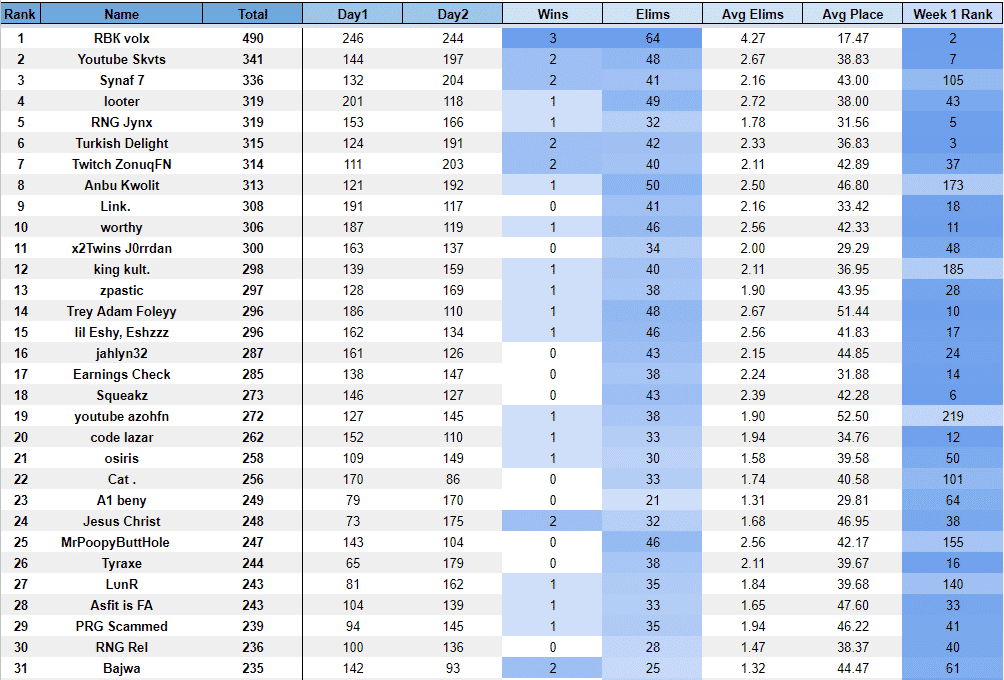 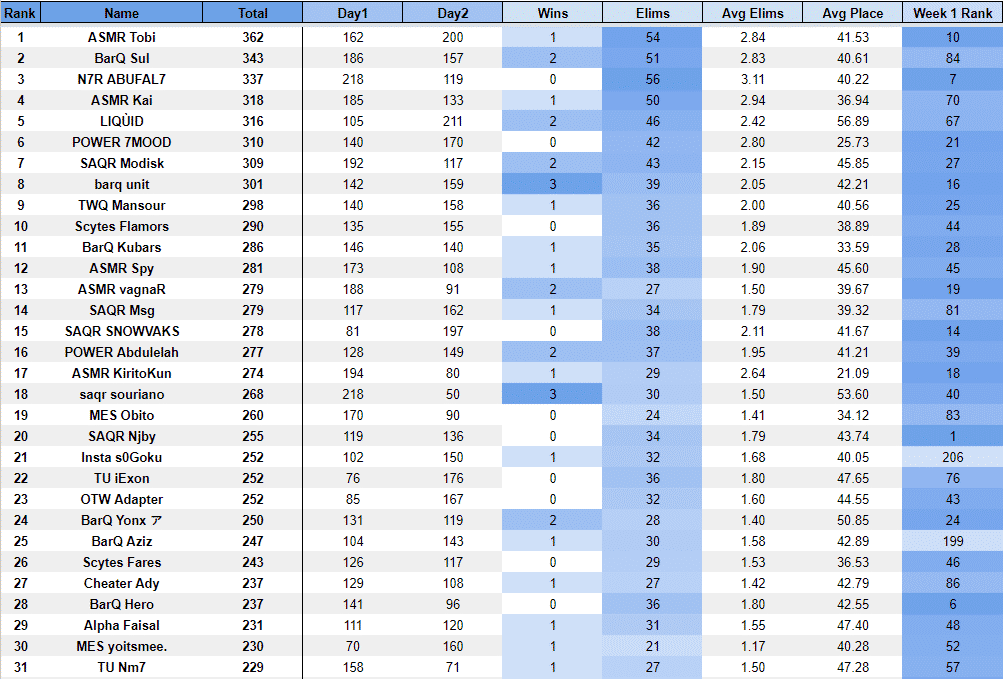 The season finals for the solos event will be held between May 11 and 12 depending on the region and the participants will be gearing up to build on their qualification placements.

Once it gets underway, you can check out all the action live with our dedicated event hub that has streams from both Epic Games’ YouTube and Twitch channels.