Fortnite’s astonishing success has been a catalyst in Epic Games creating their very own game store, and now they’re almost ready to launch it.

In a move that they claim to have been five years in the making, Epic Games intends to bring its games directly to their customers using their online platform – the Epic Games Store.

As seen with the Epic Games Launcher on both Mac and PC, the developer has put together a Steam-style system that supports numerous payment methods and their success with Fortnite has laid the ground works down for this new development.

In an official statement on the Unreal Engine website, the Founder of Epic Games Tim Sweeney said: “As developers ourselves, we wanted two things: a store with fair economics, and a direct relationship with players. And we’ve heard that many of you want this too!”

Sweeney confirmed that the new Epic Games store will launch initially with just a “hand-curated” set of games to begin with, but he expects it to open up channels with other platforms such as Android throughout the course of the next year.

The intention of creating the store, he says, is to advance the cause of developers. To give developers an idea of how Epic Games intend to achieve this objective, the Founder has published the following revenue split chart. 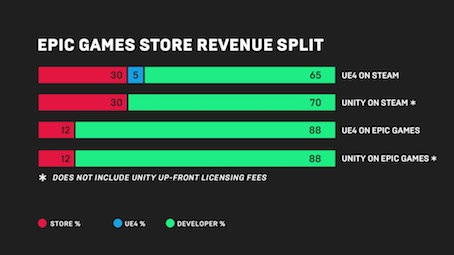 Epic Games lays out its revenue plans for other developers.

Therefore, all developers looking to use the Epic Games Store will have access to 88% of their games’ revenue, handing over 12% to Epic Games. Epic will also pay for the 5% engine royalty for sales on its platform, an attempt to seemingly incentivize developers to get on board.

From the information released today by Sweeney, it seems that developers will be able to use any engine they choose and still be able to work with Epic Games Store.

The plan looks to set out a pretty lucrative proposition for upcoming developers, but whether the model will be sustainable in the long-term and be able to compete with Steam is a question that they will have to answer.