Popular Fortnite star FaZe Sway has been accused of falsely labeling a player as a scammer, which has apparently “ruined” their competitive career.

Fortnite pro FaZe Sway has made a name for himself in the competitive community and is known for being one of the game’s better controller players alongside the likes of Aydan and NICKMERCS.

However, he has found himself at the center of controversy after being accused of ruining a player’s career following a wager match between the pair, according to YouTuber The Fortnite Guy. 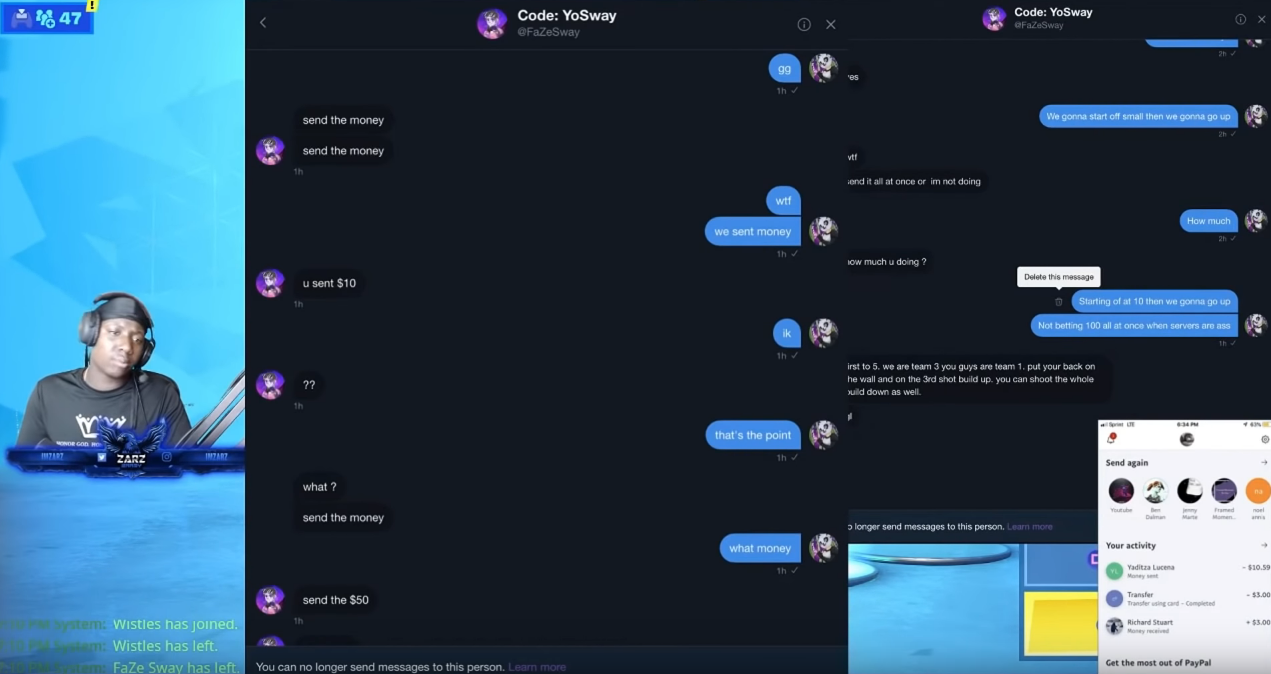 ImZarz shared some of his Twitter DM’s between him and FaZe Sway.
[ad name=”article2″]

The YouTuber highlighted that a competitive player who goes by “ImZarz” accused the Sway of “ruining his career” by claiming he was scammed over a wager match on Fortnite.

The Fortnite Guy shared the exchange which took place between the pair in Twitter messages, highlighting that FaZe Sway had demanded to be sent $50 after there was a disagreement over the amount of money placed on their match.

According to the leaked messages, the pair had agreed to start with a $10 wager, however, after the match had concluded the disagreement led to FaZe Sway posting on Twitter and ‘exposing’ Zarz for “scamming” him.

In one of his streams, ImZarz revealed that the post has had a massive impact on him, showing that many of FaZe Sway’s fans had begun harassing him in private messages.

“That’s not cool what you did, you went over the line. You tweeted me out and I’m getting so much hate right now for no reason,“ the player claimed, while trying to resolve the issue with the FaZe Clan pro.

The Fortnite Guy later explained that ImZarz was starting to rise in popularity before his exchange with Sway, and that it had a negative impact on his career competing in Fortnite.

“The really sad thing for ImZarz is that he was on the come up,“ the YouTuber revealed, before highlighting some of his analytics, “He just recently had a video over 900,000 views, then all of this drama happened and it just completely stunted his growth.“

The Fortnite Guy also revealed that he had reached out to FaZe Sway multiple times to clarify what had happened and apologize to the player, however, he has not commented on the situation publicly as of yet.