Everything you need to know about the Fortnite Fall Skirmish event at TwitchCon - formats, prizing, and more - Dexerto
Fortnite

Everything you need to know about the Fortnite Fall Skirmish event at TwitchCon – formats, prizing, and more

Epic Games have revealed details about the Fortnite Fall Skirmish event that is to take place at TwitchCon in San Jose, California from October 26-28.

This Fortnite event at TwitchCon will the sixth and last part of the Fall Skirmish competition series, after which the entirety of its $10 million prize pool will have been awarded.

There will be two Fortnite competitions held at this event – a Duos tournament open to all TwitchCon attendees who register online, and a Stream-vitational competition featuring 50 popular content creators and 50 randomly selected players at TwitchCon.

Just as with the finales of the Summer Skirmish held at PAX West, this TwitchCon competition will feature multiple phases – one for qualification and one for the Grand Finals.

In Stage One: Heats, Duo teams with the most points at the end of four matches will be declared the winner. Victory Royales and Eliminations will be scored to determine placement the each heat. The top twelve teams from each Heat will advance to the Stage Two: Grand Finals. Two additional wild card* teams will move on to make a total of 50 Duo teams.

Big Bonus: After 8 Eliminations, +1 Point will be added to each elimination.

*Scores for teams which place 13th in each Heat will be compared against one another to determine which teams advance to the Stage Two: Grand Finals.

InStage Two: Grand Finals, the Duos team with the most points at the end of six matches will be declared the winner. Victory Royales and Eliminations will be scored to determine placement at the end of the event.

Big Bonus: After 8 Eliminations, +1 Point will be added to each elimination

All Duos teams that qualify for the Grand Finals will be guaranteed to go home with at least $10,000, which can go up for higher placements.

In addition to the following prize breakdown, an additional $50,000 will be awarded for each Victory Royale and $50,000 for the most total eliminations during the entirety of the Grand Finals. 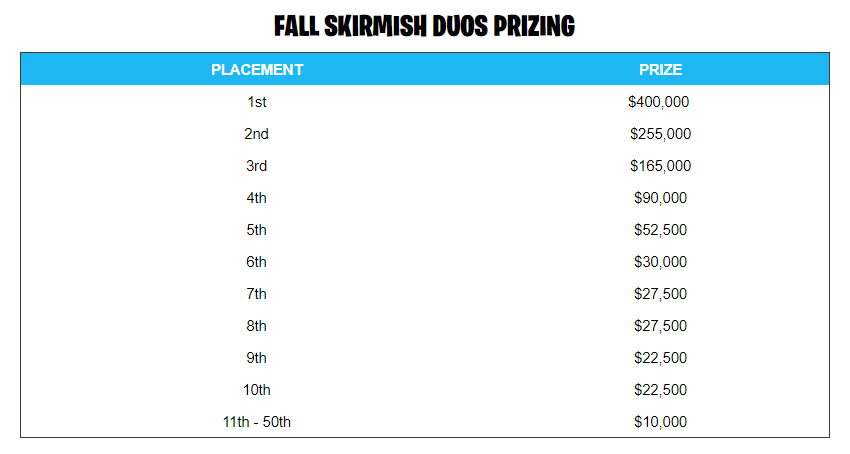 All those who are interested in competing in this Duos tournament will first have to fill out a survey, which will verify that they and their Duos partner are attending Twitchcon.

Those who qualify will be sent a registration link in the order with which their survey was received. Players who receive the link must follow these steps and meet the requirements to complete their registration:

The Stream-vitational will be the second Fortnite event held at TwitchCon, and it will feature 50 invited content creators and 50 randomly selected TwitchCon attendees.

The tournament will be split into three matches, with the prize breakdown increased for the third match. 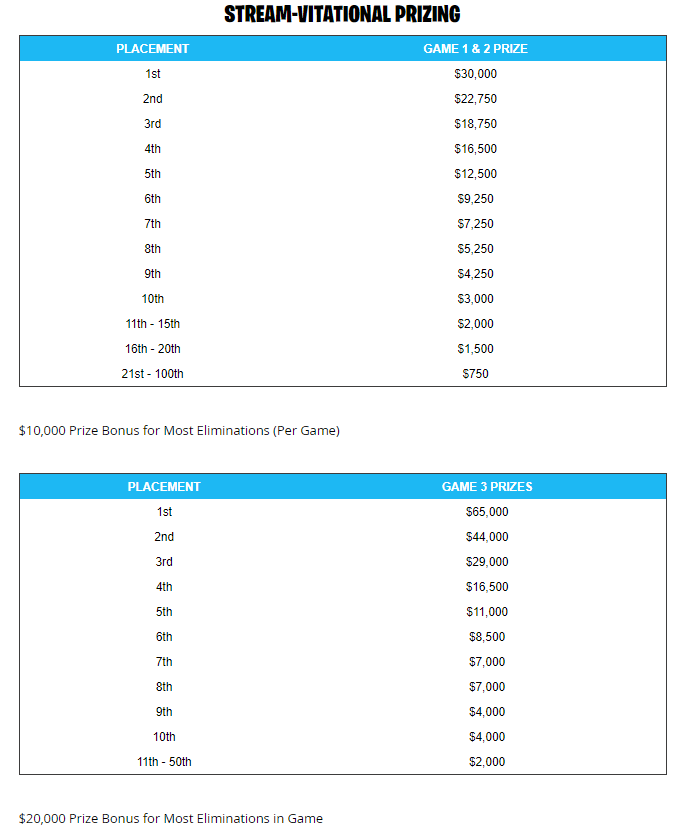 In an effort to balance the playing field and ensure fair play, Epic Games are requiring all players the same inventory, which they will provide, and in-game video settings.