Epic Games has announced that the issues with game services have been resolved and all of the servers are back online and functional.

Developer Epic Games has announced that Fortnite servers are being shut down due to several issues with game services.

Some of the services being impacted include matchmaking, login, joining parties and messaging on Playstation, and voice chat.

The announcement that servers are being taken down came at 5:55 PM PT / 8:55 PM ET via a post on the Fortnite Twitter page.

We’re taking servers down to further investigate the root cause, we’ll keep you updated on the status as we dig in.

This came after Epic tweeted out about the issues several times on July 12, noting that their team is in the process of investigation the problems with hopes of coming up with fixes soon.

We’re currently investigating issues with our game services, which include matchmaking and login. Follow our status page for updates: https://t.co/3y0X6buriO

You may run into issues partying with your squad on Playstation. We’re currently monitoring and we’ll let you know when that resolves for PS4 players!

The status page on the Epic Games website currently shows the condition of each of the game’s services are at each given moment, and there are a lot of things that are currently indicated in red. 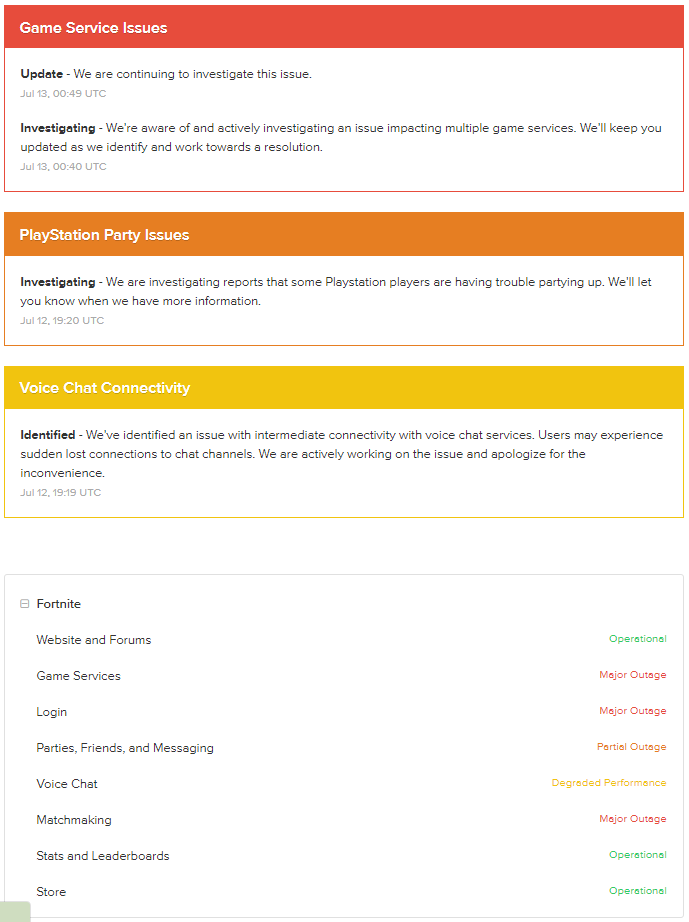 It is not yet clear what the cause of these issues is, or when they will be resolved and the servers will be reinstated.

However, with the highly anticipated Season 5 having launched earlier on July 12th, this sort of development was to be expected, considering the high volume of players attempting to hop into matches and check out the in-game changes and additions.

We will keep you updated whenever Epic Games releases more information, and when the servers are turned back online.