CouRage goes berserk after dying to BRUTEs in Fortnite

Twitch streamer and 100 Thieves owner Jack ‘Fortnite players who have an issue with the game’s new BRUTE Mechs.

The BRUTE was introduced with Fortnite’s v10.00 patch on August 1 and while it may be entertaining for some players, streamers and pro Fortnite players have been raging against how over powered the new vehicle is.

Epic Games responded with a statement on the mech backlash on August 15 and told everyone the BRUTE’s were here to stay for the foreseeable future. 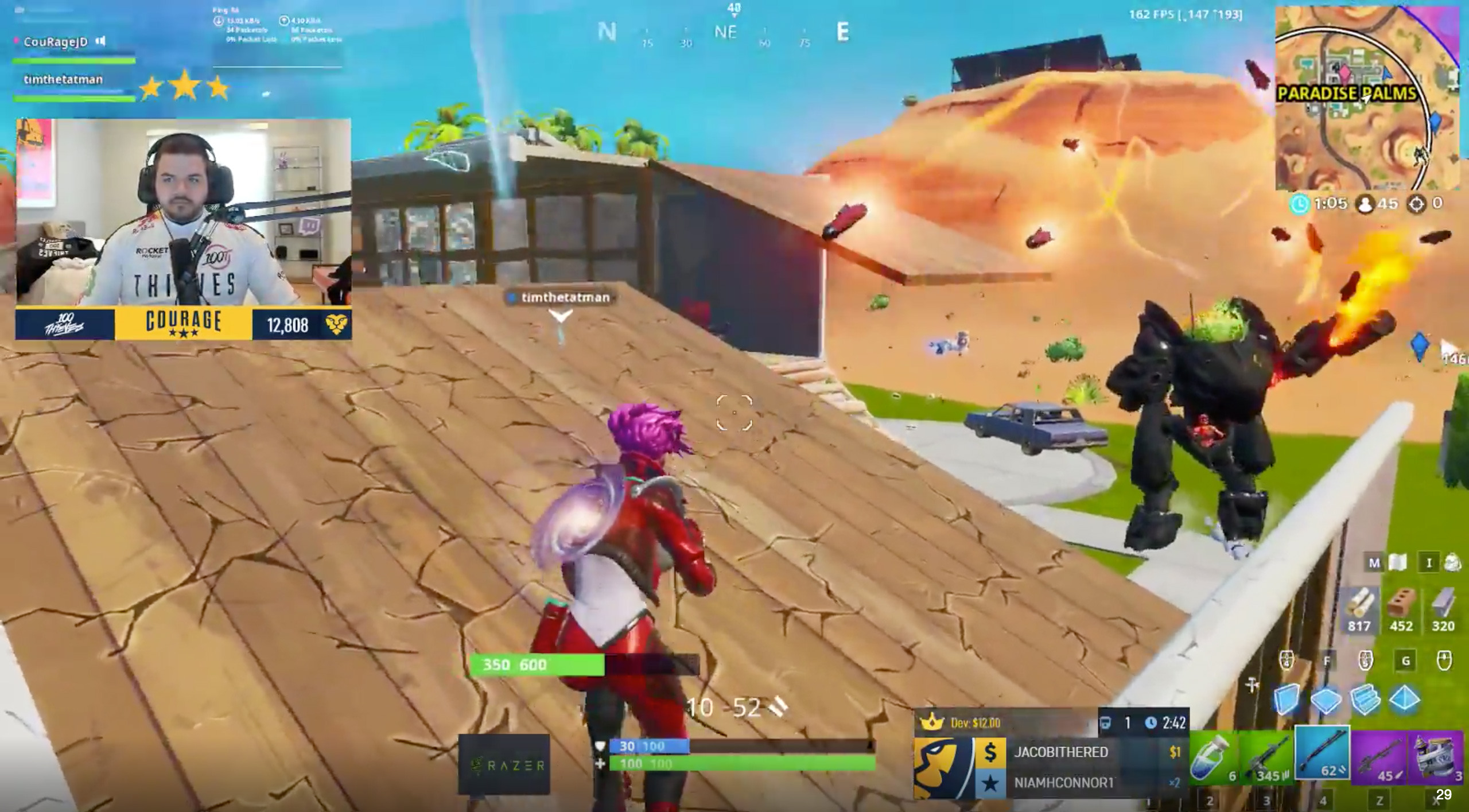 This picture says it all, really.[ad name=”article2″]

What happened to CouRage?

During a Twitch Rivals match with fellow streamer Tim ‘TimTheTatman‘ Betar, CouRage had several BRUTEs attack his team’s build at once – ending the way most mech vs. non-mech fights seem to.

The streamers’ defenses were destroyed in a matter of seconds and CouRage was knocked out soon after, which threw him off on a tirade against the vehicle.

“F**k the meeeeccchhhsss,” CouRage raged with some xQc-worthy desk smashes. “Why the f**k are they a f**king thing dude? ”

“They’re so f**king stupid dude,” Tim replied. “Why did they just blow up that one building we were in dude?”

It’s the same complaint almost everyone has about the BRUTE’s – unless you have one as well, it’s a serious challenge to take out one of the OP machines, let alone three.

I struggle to see how anyone who plays this game genuinely thinks it is in a good state right now. Sad. pic.twitter.com/1jHXo9lJjF

Is the BRUTE driving Fortnite players away?

CouRage’s latest encounter with the BRUTE seems to have been a breaking point, with the streamer telling Tim he was “done” with the game.

“We were literally hiding in the building with no real builds around us HOPING the mech would just pass over us,” said Tim, who obviously isn’t a fan of the BRUTEs either, said on Twitter. “Sad that we have to play that way right now…”

Just for the record… we were literally hiding in the building with no real builds around us HOPING the mech would just pass over us. Sad that we have to play that way right now…

So even though Epic Games have basically told Fortnite players to accept the BRUTEs into their lives, that doesn’t mean anyone is really happy about it. Besides people who manage to get the mechs, of course.