Concerns have been raised for a Fortnite content creator named Bxrry after a series of worrying posts and comments made by the YouTuber following the alleged destruction of his gaming setup by his stepfather.

Alarms were first raised on Saturday, July 13, when a tearful Bxrry uploaded a now-removed video to Twitter that claimed his stepfather had destroyed his entire gaming setup, showing off an empty desk where he said his PC used to sit, and made shocking allegations that his stepfather had beaten him.

Since then, Bxrry, who states he is 16 years old on his YouTube channel, has deleted his Twitter account entirely, but fans of the content creator started a GoFundMe page to try and raise funds which would allow him to replace his apparently broken devices.

Monday, July 15, saw more concern and confusion when Bxrry uploaded a video to YouTube with the title “YouTube, thank you all so much, I’m ok.” In this video, he states that the situation has “gotten really out of hand, really fast,” but tried to reassure fans friends that he was “100% fine.”

In the six-minute address, Bxrry claims he decided to remove the original video about his broken setup. However, a contradictory comment written by him alleged that this was not the case.

According to screenshots taken from his channel, Bxrry wrote that he had not made this new video by his own choice, but rather that he “was forced to make this video.”

He also claimed that he had been forced to delete the first video, but didn’t specify who had made him do this. 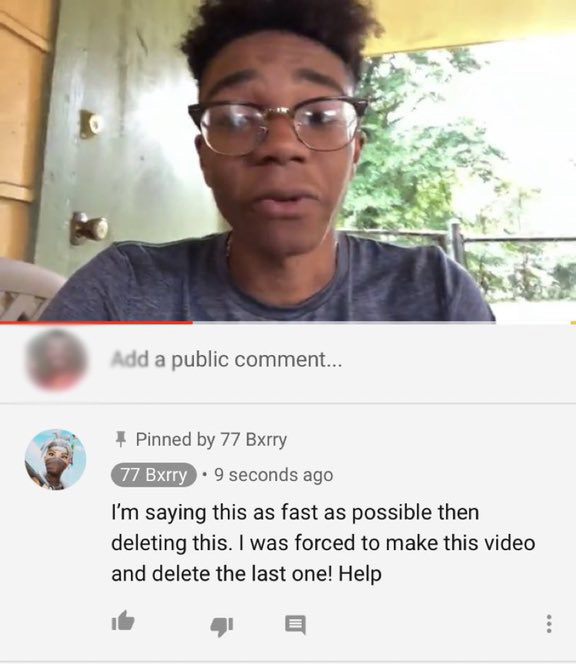 The comment claimed he was forced to make the video.
[ad name=”article4″]

Bxrry’s appearance in a livestream also caused people to worry for his safety. In it, the content creator appeared to ask his viewers for help through non-verbal signals.

According to those who watched the broadcast live, Bxrry told viewers to stop helping him because he was fine. In response, members of chat told him to ‘cough’ if he needed help. Viewers claim that Bxrry immediately turned his head and performed a coughing action.

However, it’s currently impossible to verify that this alleged cough was in response to the messages from fans without confirmation from Bxrry himself.

The statement says that the “Police have already been involved,” and that there is no need for any more calls to the authorities.

With Bxrry’s Twitter account seemingly deactivated, there is no further information on the situation at this time, but we’ll be sure to keep you updated as this story progresses.