The Solos tournament at the $30 million Fortnite World Cup wrapped up on July 28, with Sentinels pro player Kyle ‘Bugha’ Giersdorf finishing in first place and securing the $3 million grand prize.

Bugha finished atop the leaderboard with 59 points, an astonishing 26 points above CLG’s Psalm, who finished with 33 points. The top-three was rounded off by NRG’s Epikwhale with 32 points.

The competition used a format that awarded points to players for both eliminations and placements in each match.

Below, you can find the exact scoring breakdown for the tournament, as well as recaps and highlights for each of the six matches, the final placements, and the share of the prize pool that each player received. 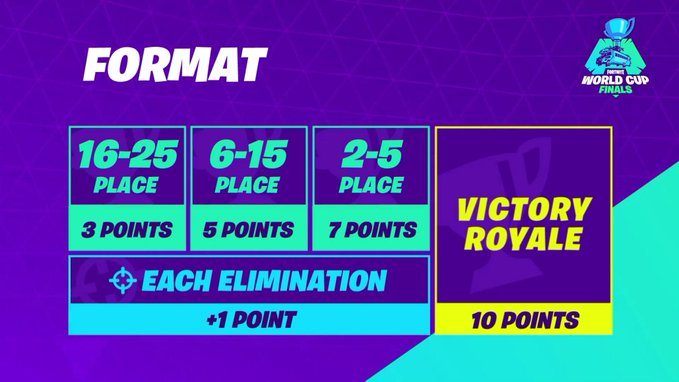 The format and scoring system for the Solos tournament at Fortnite World Cup.
[ad name=”article3″]

Bugha’s road to becoming the World Cup champion started in match one, where he got the Victory Royale and kicked off what ended up being a wire-to-wire victory. The win, coupled with his nine eliminations, gave him a strong 19-point haul to kick things off.

13-year-old Argentinian player KING set a huge impression as well during the first match, making some aggressive pushes for eliminations to get second place.

A very intense endgame between FaZe Clan’s Dubs and LeStream Esport’s Skite ended in the way of the Frenchman, who got the Victory Royale despite just having eight health points when the match finished.

The win was enough to push Skite into sixth place, but game one standouts Bugha and KING did enough to keep their places atop the leaderboard.

Game 2 finishes with a Victory Royale for @RxTSkite who manages to rotate up the mountain despite lacking health. 13 year old @k1nGOD also putting on a show in the first 2 games and becoming a crowd favorite at #FortniteWorldCup

Not letting his narrow second-place finish in the previous match faze him (no pun intended), Dubs regained quickly to get a strong Victory Royale in game three.

He found himself in another intense 1v1 at the end of the match, this time against Team Liquid’s Riversan, but this time he came out on top.

The Victory Royale in the 3rd game of the #FortniteWorldCup Solo Finals goes to @Dubsfn.

A tense 1v1 in the final moving circle against @LiquidRiversan gives Dubs the 10 placement points in addition to 2 eliminations.

FaZe had the chance to get a second straight Victory Royale as their newly acquired star Mongraal was on an elimination rampage in the last stages of the match.

However, CLG’s Psalm denied Mongraal the cherry on the top, eliminating him to get the Victory Royale, even though it was just his first elimination.

Game 4 is a win for @psalm as he shuts down @Mongraal's elimination rampage on the low ground.

Who will close this out in the last 2 games?

Game 5 – Kreo clutches up, but Bugha builds his lead

The second-to-last match of the Solos tournament saw Lazarus’ Kreo take the Victory Royale, boosting himself all the way up to third place in the standings.

However, Bugha’s three eliminations and fourth place finish continued to add points to his overwhelming tally, giving him a whopping 15 point lead going into the final match.

The penultimate game at the #FortniteWorldCup is won by @KreoFN who navigates a busy final few circles and outlasts his opponents to secure maximum placement points.@bugha performs well in game 5 too and extends his lead at the top.

The sixth and final match saw Swedish pro Crue of Valhalla Vikings get the Victory Royale, pushing him all the way to sixth place in the final standings.

However, it was Bugha who stole the show in the last game, staying alive until nearly the very end to secure another healthy dosage of points and secure the tournament victory.

The final game of the 2019 #FortniteWorldCup is won by @crue1x. Prior to this game @bugha was 15 points clear and he showed up again here playing with a smile on his face. pic.twitter.com/mYbYeL4aay

With the six matches completed, here are the final placements for the $15 million Solos tournament at the Fortnite World Cup.

16-year-old Bugha took home the weekend’s grand prize, but you can view all 100 players performances below. 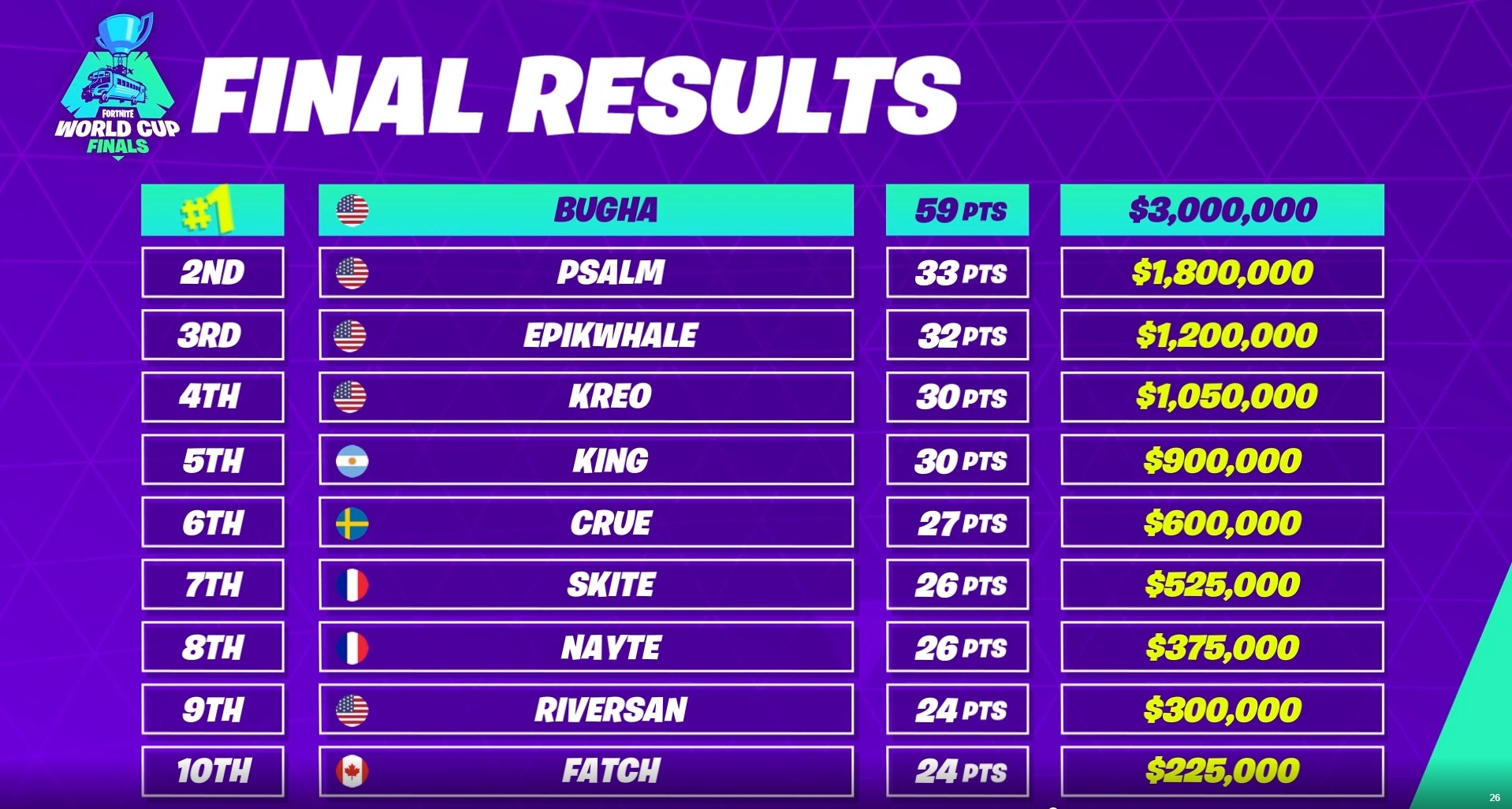 The Solos tournament was the fourth and final Fortnite competition held in New York City this weekend, following the Creative Finals, the Celebrity Pro-Am, and the Duos tournament.

Below, you can find full recaps, video highlights, and final placements for all of these events.

With that, the first ever Fortnite World Cup has finally come to an end, following months of grueling and stressful qualifiers and the biggest three-day span in competitive Fortnite history.

How to get Hisuian Sliggoo & Goodra in Pokemon Legends Arceus