Since the introduction of the Premier League’s Team of the Season So Far promo collection, where the likes of Virgil van Dijk, Sadio Mane, Riyad Mahrez and others were included, there’s no doubt people want to get their hands on such valuable cards.

This new challenge doesn’t guarantee you will grab one, but does promise that four rare gold players from that league will appear in the rewards. This is a limited time challenge and is repeatable, meaning that you can finish it more than once until you get rewards that make your grind worthwhile.

The Premier League’s TOTSSF was revealed on May 1, along with some SBCs – like Raul Jimenez, Wilfred Ndidi, and Ayoze Perez.

If you’re looking to finish this SBC a few times, you better hurry up as it is only sticking around until May 7.

The good news, though, is that completing it is actually fairly simple – in terms of requirements – and the full list of which can be found below. As seen, only one team needs to be made in order to check this one off.

As the list shows, you will have to hand over 11 rare players in order to get four back from the Premier League. Is it worth it? Well, let’s run through the cost and solution, so you can make that call yourself…

According to the ever reliable FUTBIN database, a website that monitors the cost of players on the FUT market, the challenge costs between 27,000 to 30,000 coins, depending on which platform you play on.

Do note, however, that the market is ever changing and that price may shift as time goes on. Anyway, here’s one possible solution… 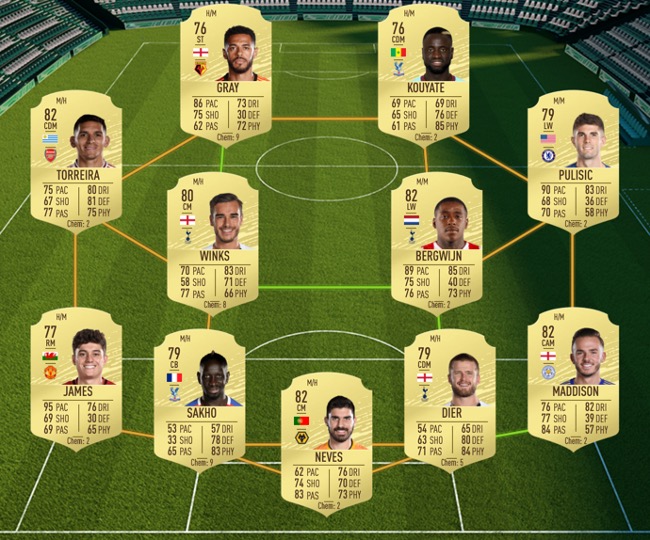 Not too difficult after all, right? The standard 4-4-2 with a bunch of Premier League rare gold players will do the trick, and even if you don’t want to complete this Squad Builder, there’s an opportunity in the market for you as well.

Everybody will be buying up these cards right now, so if you have a few spares in your club gathering dust, you might want to add them to the Transfer List while this SBC is running – and cash in.

For more SBC guides and all other FIFA Ultimate Team news, stick with Dexerto and follow us on Twitter @UltimateTeamUK.