The latest FIFA 21 Team of the Week, TOTW 19, is now live in Ultimate Team ⁠— here’s everything we know about 2021’s newest in-form team.

FUT fans have been treated to a few strong TOTW lineups in a row recently, and the promo’s nineteenth in-form squad seems to be contiuing that trend.

Some prominent forwards are featured this week, including Liverpool’s Mo Salah for ripping West Ham apart with a brace and Lautaro Martinez, who led Inter Milan to a 4–0 win over Benevento.

There are some excellent midfield choices as well, such as Lazio’s Milinkovic-Savic and Dortmund’s Delaney, both of whom offer excellent defensive and offensive presence in the midfield.

Here’s everything we know about the mid-week FIFA 21 promo so far, including Dexerto’s weekly predictions prior to the release of the team. 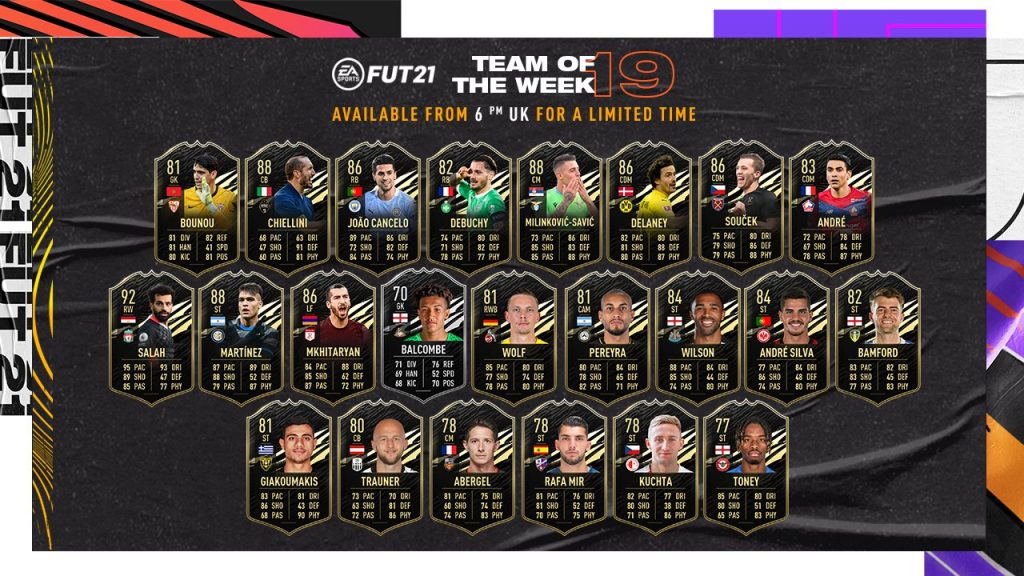 Team of the Week 19 start time

FIFA publishers EA will release the nineteenth batch of Team of the Week cards for this year on February 3. The TOTW 19 promo began at 6pm (UK time), as per usual, which is 10am CT, 1pm EST, 2am AEDT around the world.

These boosted TOTW player upgrades are all now announced at the same time as they drop in-game in FIFA 21. Keep your eyes peeled on our official Twitter account — we always make sure to share the team as soon as it’s live.

Lautaro Martinez was well worth a TOTW 19 nod this week.

Now that the TOTW is out, make sure you check out Dexerto’s predictions as we compiled a list of all the players that could get those IF cards this week; let’s see how many we got right:

So, there you have it ⁠— everything you need to know about the latest TOTW squad in FIFA 21 Ultimate Team!