The attacking midfielder only made his debut in the first round of Ligue 1 fixtures back in August 2019, and has already made a splash in the fixtures. But the rising French star was also included in the FUT 17 TOTS, which one of the SBCs celebrates.

With this SBC, EA has once again given players two options: they can either go for a brand new 88-rated version of Cyprien by completing the normal challenge, or instead, cough up a little extra and get themselves the premium 91-rated CM card. No matter which one you’re considering, we’ve got all the info you need.

To help you decide which version you’d like to unlock, let’s look at the differences in statistics between the two.

Obviously, the 91 rated overall version has some nice upgrades like significantly higher dribbling, with the lower having 90 agility and the other having 94, as well as 89 and 93 ball control, respectively. 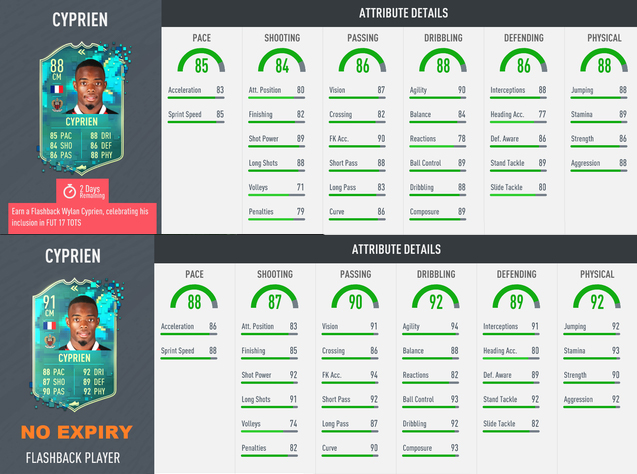 Some stats aren’t that far off between the two, but the 91 is undoubtedly more powerful.

As seen above, there is no expiry on the 91-rated version SBC, meaning players have time to get their hands on enough cash to be able to buy it. However, the 88-rated version does close off on June 2, 2020.

As these are two separate challenges, the requirements also differ. For the normal challenge (88), you’re going to need to build just one team, whereas the premium (91) will require three this time around.

Now let’s move on to the premium Flashback SBC challenges…

Depending on which one you’re after and what platform you play FIFA on, the cost varies. For the normal challenge, FUTBIN estimates it will set you back around 77,000 to 91,000 coins to complete. With the premium SBC, though, the amount you will need to shell out increases – estimated between 255,000 and 280,000 coins.

On that basis, it’s pretty much just down to whether or not you think, based on the in-game stats, that the upgrade is worth the extra cash. Solutions for all can be found below.

This is the only solution you will need for normal (88) Cyprien.

This Flashback is broken into three challenges, with the first being Les Bleus, the second for Ligue 1 Conforama, and the third the Top Performer SBC.

It’s not really for us to say which of these challenges is the most worthwhile, so we’ll let you decide. The upside of the premium challenge is that you pick up rewards packs along the way, but it’s more expensive, so it’s worth weighing up your options before settling.

Once you have made your mind up, though, feel free to share your in-game snaps with us on Twitter @UltimateTeamUK. Until next time, feel free to check out our guides for the Serie A SBC, Player Moments Daichi Kamada, and others.
Advertisement