The fourth iteration of FIFA 20’s Team of the Week Moments has officially arrived, bringing some big upgrades to certain players in Ultimate Team.

Team of the Week Moments came out of necessity for FIFA 20, with the ongoing global crisis meaning that the traditional Team of the Week format could no longer be adhered to due to there being no matches being played.

The introduction of Moments was met with some skepticism from players and thus far has delivered results with mixed responses, with Team of the Weeks from previous FIFA titles getting upgraded for the current game.

We predicted Paul Pogba to get an upgrade for TOTW Moments 3.

The decision to introduce Moments was a quick one from EA SPORTS, who had to think on their feet after all major leagues were canceled.

In the first three weeks, we’ve seen Team of the Week upgrades from FIFA 17, FIFA 18 and FIFA 19, and it looks like this weeks is from FIFA 19 once again, with the likes of Jamie Vardy, Son Heung-min and Robert Lewandowski getting rejuvenated TOTW cards from TOTW 30 in 2019. 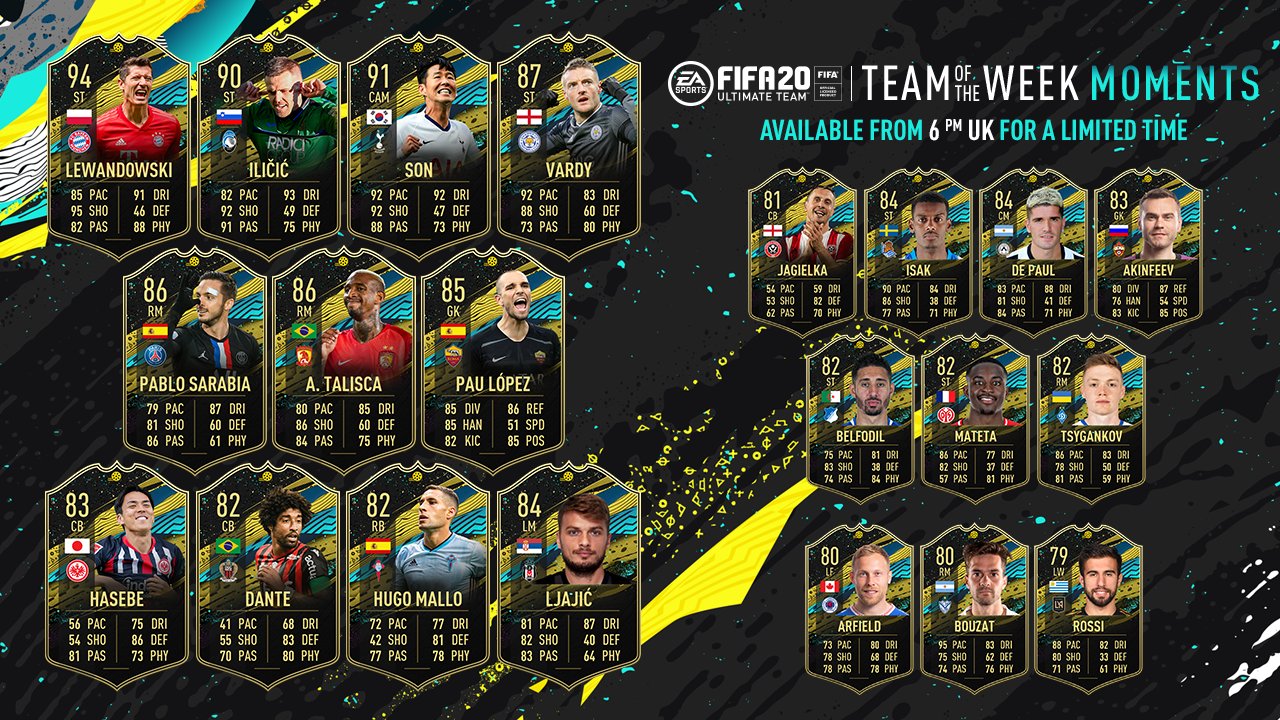 Players will be excited to see the likes of Lewandowski and Iličić returning with boosted stats but certain players, such as Phil Jagielka, might raise some eyebrows, especially in today’s game.

In recent weeks, we’ve seen 95-rated Kevin de Bruyne’s and a 91-rated Kalidou Koulibaly in TOTW Moments 2, while Moments 3 was widely criticized by players due to the poor options available, with no players rated higher than 87.

This week’s TOTW Moments will likely be received better by players than last week’s, especially with some more viable options from across the Premier League and Bundesliga making for appealing additions to many teams.

FIFA 21’s Team of the Week 17 is on the horizon in Ultimate Team. While Team of the Year might be the focus of some players, this could set could have some nice cards. So, here are our predictions.

With the FA Cup getting underway last week, Team of the Week 16 gave EA the chance to shine the spotlight on some other leagues while also adding in a handful of standout players.

This week, as we approach TOTW 17, English sides are eligible again, and should feature a decent bit as there were a few outstanding performances. Of course, though, we’ll still get players from all over the globe.

So, without any further ado, here are our predictions for FIFA 21’s Team of the Week 17.

Liverpool’s Alisson Becker should be a shoe-in for TOTY, but deservers other cards.

This week our predictions are headed by two players who could end up with a Team of the Year card – Liverpool’s Alisson Becker and Bayern Munich’s Thomas Muller. Alisson saved the Reds a point in a tight game against Manchester United.

Elsewhere, we’ve included Matheus Pereira for his MOTM performance for West Brom against Wolves, Lorenzo Insigne for his goals and assist for Napoli, and Nicolo Barella for his performance against Juventus.

Ajax’s Klaas-Jan Huntelaar is a bit of a throwback, as he hasn’t a TOTW card in forever. However, he deserves one for lifting the Amsterdam side to a late win over FC Twente.

In terms of a Silver Stars prediction, we’ve gone with Crotone’s Nigerian striker Simeon Nwankwo – who is simply known as Simy in FIFA.

The 28-year-old bagged two goals and chipped in with an assist during the win over Benevento, and should get a nice boost to the top end of the current silver cards.

Crotone striker Simeon Nwankwo (28) took his tally for the season to six goals in the Italian Serie A, after scoring a brace in Crotone's 4-1 thrashing of Benevento on Sunday. pic.twitter.com/rXAFkumz6d

Obviously, these are purely our predictions for TOTW 17 and aren’t official in any way. EA might decide to hold certain players back because of TOTY – though, that is set to be revealed “later in January.

Either way, it’s only a short wait until we know who is in TOTW 17 as the new cards will be released on Wednesday, January 20 at 6 PM GMT.