EA SPORTS have revealed the Team of the Season So Far for the Premier League in FIFA 20 Ultimate Team (FUT), and it’s stacked with some unbelievably high-rated players, not to mention the untradeables they’ve also rolled out for SBCs and Objectives.

Team of the Season is always one of the most hyped promos in FIFA, and this year EA SPORTS have had to mix it up a bit since almost every major European league is currently postponed or canceled.

Following the Community and EFL TOTSSF squads that were released on April 24, EA have gone ahead and rolled out the highly-anticipated one for the Premier League, which is one of the most popular and oft-used leagues in Ultimate Team.

As you’d expect, the team is star-studded and high-rated, headlined by the likes of a whopping 99-rated Kevin De Bruyne, 99 Virgil Van Dijk, 98 Sadio Mane, and more.

Considering how well they were playing before the Premier League got suspended, it’s not surprising to see seven Liverpool players in this TOTSSF, by far the most for any single team. Furthermore, a couple of players – Jamie Vardy and Adama Traore – both received upgrades to their weak foot, now featuring four-star and three-star WFs respectively. 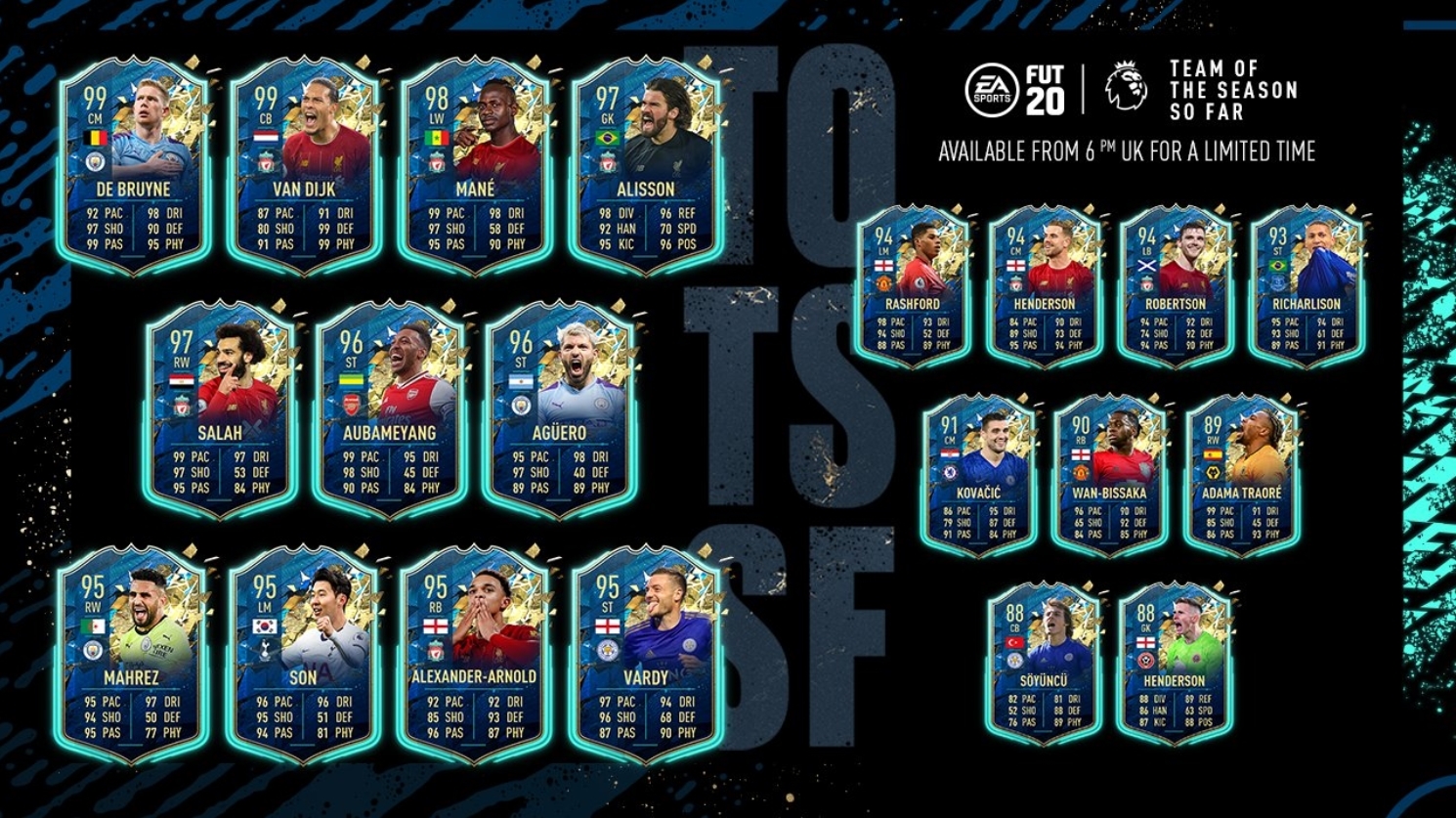 There are also three untradeable cards released for the PL TOTSSF – a 91-rated Wilfred Ndidi, 91 Raul Jimenez, and 89 Ayoze Perez.

Ndidi can be unlocked through an SBC that’s not all that expensive considering that he looks like one of the best CDMs in the game. You can check out the requirements, cheapest solutions, in-game stats, and more here.

One of the driving forces behind the Foxes' surge ?#TOTSSF SBC Wilfred Ndidi is in #FUT20 pic.twitter.com/LjRAa4tk0E

As for Jimenez and Perez, they’re both available via Objectives, and while they may take some time to unlock, you can get two decently high-rated cards for free.

Check out our Premier League TOTSSF Objectives page for all the requirements, in-game stats, and fastest ways to unlock both.

A high standard of excellence ? Rising to the occasion ?

Team of the Season So Far Raúl Jiménez and #TOTSSF Moments Ayoze Pérez Objectives are live in #FUT20 pic.twitter.com/v7nWeE9aGr

Ayoze Perez’s card is technically not a regular TOTSSF item, instead a brand new type of card called TOTSSF Moments.

We will be providing guides on how to unlock all three cards shortly, so make sure to follow us on Twitter @UltimateTeamUK for all the latest FIFA 20 news, updates, SBC guides, and more.