EA SPORTS have revealed a brand new set of TOTS So Far cards in FIFA 20 Ultimate Team, this time for Liga NOS, the first division in Portugal. The squad is full of some strong-looking cards, including several that were rolled out via SBC and Objectives.

Many players have been hard at work, trying to figure out who will be selected in each TOTSSF set so far, as they have been progressively released during the event. First up, we had the Community picks, then EFL, Premier League, and more have followed.

After teasing the arrival of more promo cards in recent times, fans of clubs in the Portuguese top flight – and generally speaking, football fanatics across the world – have been eagerly anticipating the next drop. So, let’s take a look at who is included.

Have Benfica and Sporting got players in the TOTSSF? Well, let’s see.

Those who regularly watch the likes of Benfica, Porto, Sporting Lisbon and others will welcome many of these new additions, that’s for sure. While others might be thinking: “Liga NOS… Who on earth do I need from that league?” You will be surprised to see how many of these high-rated cards you can probably fit into your team.

The TOTSSF squad is headlined by 94-rated Alex Telles, which is sure to be a fan-favorite, followed by 94 Pizzi, 93 Rafa, and many more. With both FC Porto and SL Benfica currently leading the way in the Portuguese league, it’s no surprise that the team is comprised mostly of players from those two clubs. 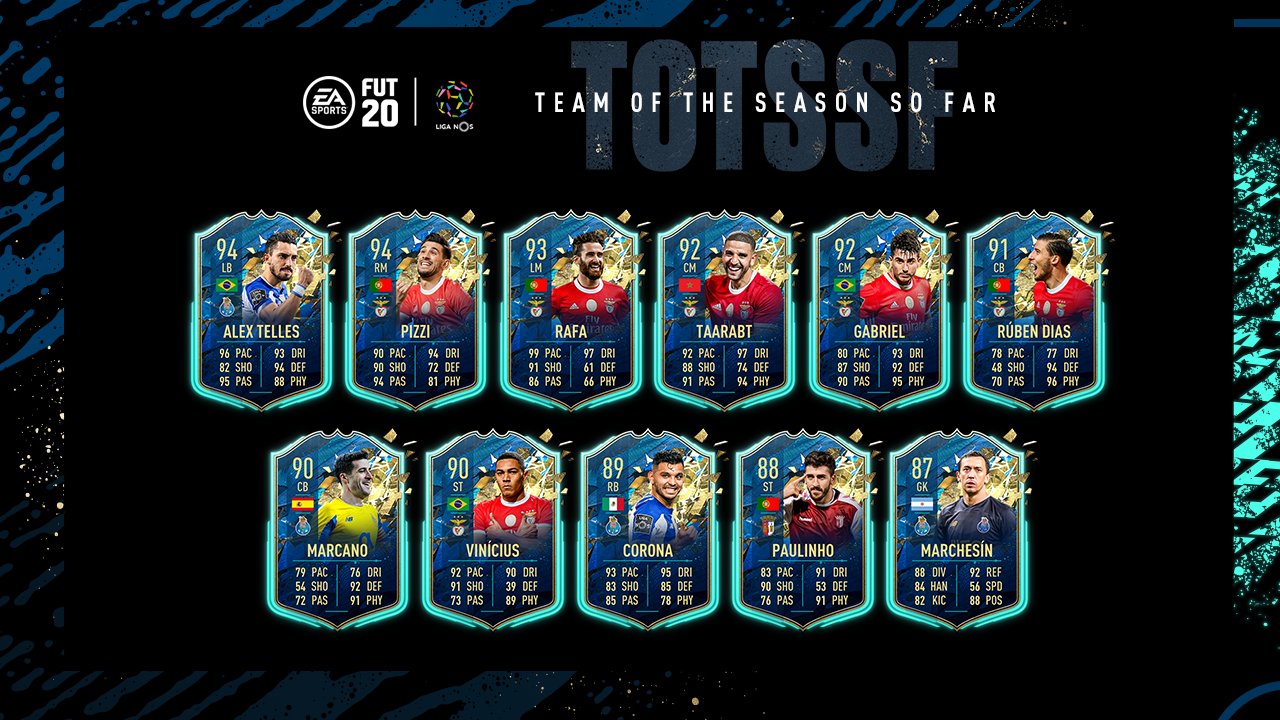 As has been the case with every other Team of the Season release so far in FUT 20, EA have released a couple untradeable cards from the Portuguese first division – a 90-rated Luis Diaz and 91 Jeremy Mathieu.

Diaz is available via a new SBC that’s been added to Ultimate Team and is pretty cheap considering how good his attacking stats are. You can check out the requirements, cheapest solutions, in-game stats, and more here.

As for Mathieu, his TOTSSF be unlocked by completing the new Objectives in-game. Check out our Liga NOS TOTSSF Objectives page for all the requirements, in-game stats, and fastest ways to unlock it.

So, there you have it! Some big names have been included in this week’s first TOTSSF set, and all eyes now turn to this Friday when EA are set to release even more in Ultimate Team. Will it be Ligue 1? Hard to say, but here are some predictions. In fact, it might even be Serie A – and we have predictions for that too!

For more FIFA 20 news, SBC guides, and updates head over to our official Twitter page @UltimateTeamUK and hit us up with your reactions.