EA SPORTS have revealed their newest Team of the Season So Far (TOTSSF) – and it is the one everyone is usually on the edge of their seat for, La Liga.

When it comes to the Team of the Season promo in FIFA Ultimate Team, fans are eager for a handful of leagues to come out so that they get the best cards possible. In FIFA 20, we’ve already ticked off one of them in the form of the Premier League, but there are still a few more to go.

Fans are desperate to get their hands on the Bundesliga, Serie A, and even French Ligue 1, but the traditionally biggest of them all – La Liga – is having its moment in the spotlight first, and the team is as impressive as ever.

EA revealed the team on Friday, May 8 at 6 pm BST, with the lineup of cards dropping right into packs. As ever, both Barcelona and Real Madrid are well represented, with the Spanish giants having five and four players respectively.

As is usually the case, the La Liga Team of the Season is headlined by Barcelona’s Lionel Messi, but there is plenty of shine for other teams. 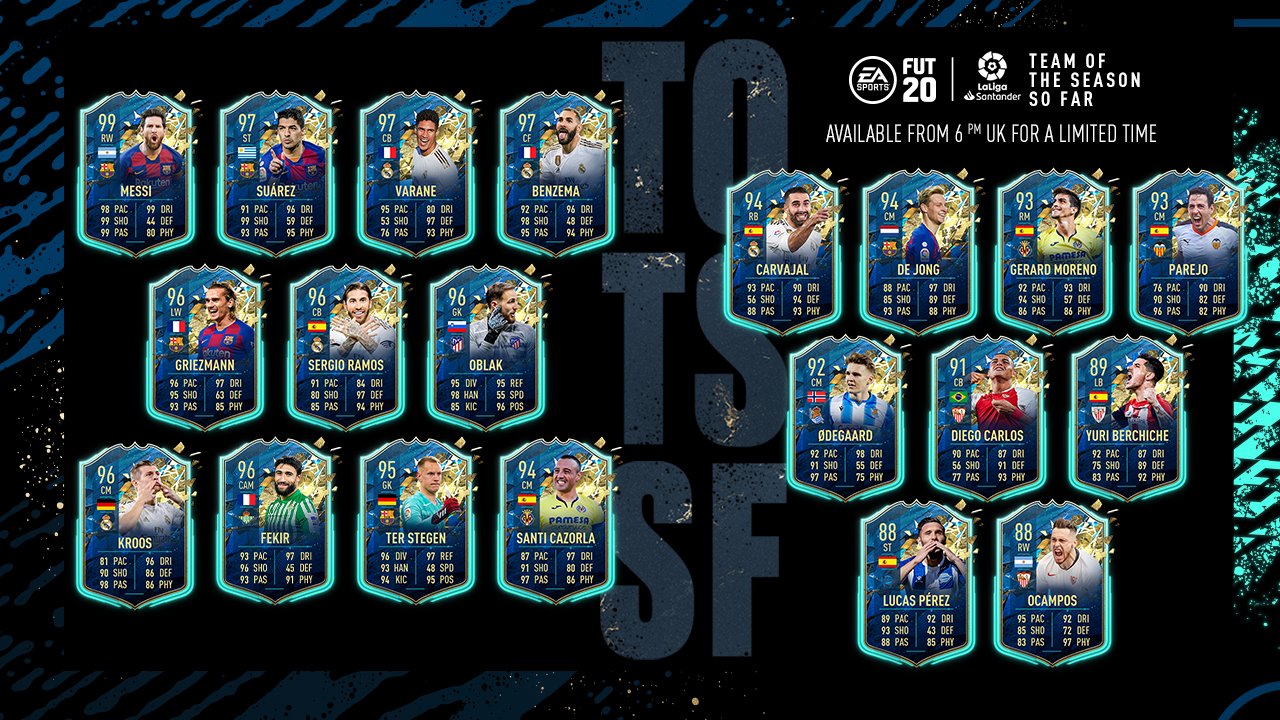 As has been the case for past TOTS So Far squads, EA have also released three untradeable cards as part of the La Liga set – a 92-rated Saul Niguez, 92 Segio Reguilon, and 89 Mariano Diaz, which is actually a TOTSSF Moments item.

Saul, who looks like he could be one of the best box-to-box midfielders in the Spanish league, can be unlocked through a new SBC. You can check out the requirements, cheapest solutions, in-game stats, and more here.

Atleti's engine in the middle of the pitch, Saúl's #TOTSSF SBC is now live in #FUT20 pic.twitter.com/FmEPPzE06T

As for Reguilon and Mariano, both can be obtained by completing the specified in-game Objectives. Check out our La Liga TOTSSF Objectives hub for all the requirements, in-game stats, and fastest ways to unlock both.

La Liga’s Team of the Season So Far represents the fifth squad to be released as a part of the TOTSSF promo, and the hype train is still rolling on. As noted, we’ve still got the Bundesliga, Serie A, and Ligue 1 to go – as well as leagues like Turkey, Netherlands, and the MLS.

EA hasn’t revealed their full release schedule as a part of their roadmap, but hints about the upcoming teams can be found in the FIFA 20 loading screens, so be sure to keep an eye out for what they’re teasing in the coming days.

As for now though, be sure to let us know if you’ve managed to grab a La Liga Team of the Season So Far card in your packs by tweeting us @UltimateTeamUK.