Our shortlist of FIFA 19 TOTW 27 predictions is now underway. This exclusive list of FUT TOTW candidates features players who participated in league fixtures between Tuesday, March 12 and Monday, March 18. See our FIFA 19 Team of the Week 27 predictions below.

The EA SPORTS FIFA team are scheduled to reveal the official FIFA 19 TOTW 27 squad at 3pm (UK time) on Wednesday, March 20, 2019. This latest release of FUT 19 Team of the Week 27 in-form cards will then become available in FIFA 19 Ultimate Team packs the same day at 6pm UK.

Our FIFA 19 Team of the Week 27 predictions consists of players that have stood out to us in recent league matches. This week’s games span from last Tuesday (March 12) to Monday (March 18). The following selections include players that we feel have a genuine chance of receiving in-form FUT cards.

FIFA Ultimate Team fans may wish to keep an eye on these TOTW predictions, as they can be used as a way to make FUT coins. Team of the Week predictions are helpful for trading methods such as FIFA 19 OTW (Ones to Watch) investing. However, we remind you that there are no guarantees that any of these players will feature in the final FUT 19 TOTW 27 squad.

The next set of FIFA 19 FUT Champions Rewards (for the previous Weekend League) are likely to contain a number of players from our TOTW predictions. This new batch of FUT Champs rewards are scheduled to be released at 8am UK, Thursday, March 21, 2019. You can find our FUT 19 Team of the Week 27 predictions directly below. 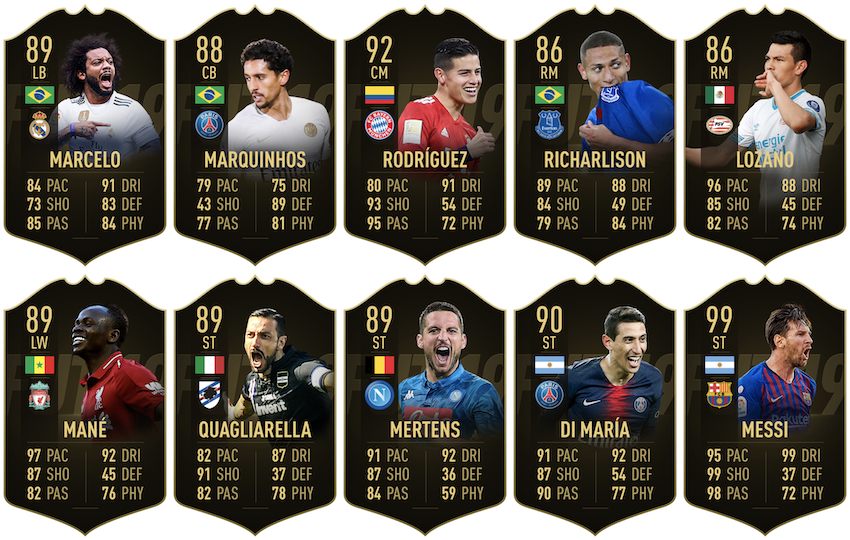 Which in-form cards are you hoping to see feature in this latest squad? Have we forgotten to include any deserving candidates in our FIFA 19 TOTW 27 predictions? Feel free to contact us via Twitter and share your own predictions with us.

Pokemon card YouTuber loses it after opening luckiest pack ever

AC Milan’s Zlatan Ibrahimovic has had the whole world talking about him due to his insane scoring run in Serie A, but has opened a new debate with FIFA 21 makers EA SPORTS over his game face rights.

His team is sitting pretty at the top of the table in Italy’s top flight, and after scoring two goals in Milan’s 3-1 victory over Napoli on November 22, much of the talk surrounding the player was about a possible inclusion in Team of the Week 9.

That being said, if there’s one thing Zlatan does better than anybody, it’s control the conversation about him.

He certainly did that on November 23, as he took to Twitter to blast EA SPORTS for using his game face without “permission” – he says.

In a series of tweets, the player said: “Who gave FIFA EA Sport permission to use my name and face? I’m not aware to be a member of Fifpro and if I am I was put there without any real knowledge through some weird manouver. And for sure I never allowed FIFA.com or Fifpro to make money using me.

“Somebody is making profit on my name and face without any agreement all these years. Time to investigate,” he adds in a follow-up.

Somebody is making profit on my name and face without any agreement all these years.
Time to investigate

As expected, the move has sent shockwaves on the social media platform.

The Swede is accusing EA SPORTS of using his face to make money, though his club AC Milan actually signed an exclusive agreement this year to allow the developers to use accurate face scans for the entire team. The same goes for other EA Official Partner Clubs, such as Real Madrid and Inter Milan.

AC Milan are one of many EA Official Partner clubs.

There appears to be some confusion about the situation, between player, club and developer, and this story is likely to be a developing one. Should we hear more from Zlatan or other official sources, we’ll be sure to keep this article updated.

Fans of AS Roma will know the feeling of seeing their club restrict devs from using their player likenesses and official club branding in FIFA 21. Should Ibrahimovic pursue this further from a legal standpoint, there’s a chance his likeness could also be restricted for FIFA games in the future.

Pokemon card YouTuber loses it after opening luckiest pack ever