In this FIFA 19 custom tactics guide, we will detail the best game plans and player instructions for the 4-4-2 formation. If you aren’t yet familiar with custom tactics in FIFA 19, then the following information should help you a lot!

FIFA 19 custom tactics allow users to create certain game plans for each form of defence and attack. This is coupled with being able to implement specific player instructions, completely changing individual player’s styles of play when changing between defensive, balanced, and attacking game plans.

For example, you could change your player instructions to ensure that constant pressure is applied when using the ultra attacking game plan. This could be extremely useful if you end up having to chase a game. Alternatively, you could decide to tell you central midfield players to sit behind the ball and contain if you are winning a game. The point is that users can adapt custom tactics in FIFA 19 to suit their style of play, depending on any situation. 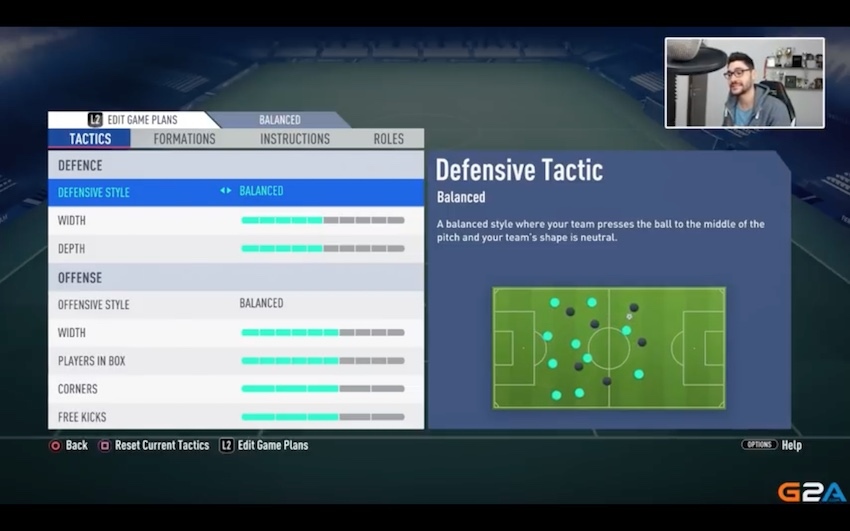 It is also important to adjust your tactics to facilitate certain players within your team. For example, it isn’t ideal to have the long ball activated when you are ultra defensive and have a small striker who will be dominated by opposing centre backs. Being able to cater FIFA 19 custom tactics and instructions to your team, will enhance your player’s performances and more importantly, it will get the very best out of them.

The formation we are using for this particular example is the age-old classic 4-4-2. This formation is regarded as being one of the best pressure formations in FIFA 19, which can be very effective against your opponent in certain circumstances. The video featured below details each of the most effective and best player instructions, as well as overall custom tactics!

The 4-4-2 is a good formation for a number of reasons, but a lot of this is dependant on the central midfielders being able to play as box-to-box CM’s (they must be able to attack and defend). Top end players fitting this description would be Gullit and Kante, however, players such as Fabinho, Kondogbia and Nainggolan would also play a fantastic role in this scenario. Below, we will detail the best custom tactics and player instructions for each form of defense and attack for this formation.

Player Instructions: Same as above although both strikers and wingers should be on ‘come back on defence’.

Player Instructions: Your full backs and central midfielders should be on ‘stay back while attacking’ with both CDM’s as ‘cover center’.

Player Instructions: Both full backs ‘stay back while attacking’ and both central midielders ‘cover center’. Your more defensive midfielder will change to balanced here. The rest of your team should be on balanced.

Player Instructions: Both full backs should be on balanced with the central midfielders. Both CDM’s should also ‘cover the wings’. Your wingers and strikers should also be on ‘stay forwards’.

The 4-4-2 formation has never been so good using these FIFA 19 custom tactics and player instructions. By following these instructions, you can implement the best form of defence or attack depending on the score. Custom tactics in FIFA 19, will undoubtedly help you to achieve more wins (particularly in the FUT Champions Weekend League), as they help provide a solid structure to your team.

Let us know if the above custom tactics in FIFA 19 have helped you in-game. If you’ve had success with any others, get in touch with us via Twitter. We would love to hear your thoughts and opinions!