With the majority of FIFA 20’s Team of the Season So Far (TOTS So Far) sets now released, let’s take a look at the best cards to buy, at a variety of different price ranges in Ultimate Team.

Despite months passing since the majority of European leagues were suspended, the fate of many remains unknown. In response, EA took it upon themselves to release TOTSSF, limited time celebrations of the stand out players in each league, up to the point at which they were suspended.

The move has generally been well liked in the FIFA community, offering players the chance to get their hands on some seriously impressive cards, despite the carnage that continues to engulf real world football.

We’ll explain our picks as we make them, also giving accurate prices as of the time of writing – using the reliable FUTBIN database. This article will also be updated as more TOTS So Far cards are released. So, let’s jump right into it.

As you’d expect, there currently aren’t that many TOTSSF cards available for this sort of price. Players have to really turn to more undesirable leagues to find cards that are this cheap. 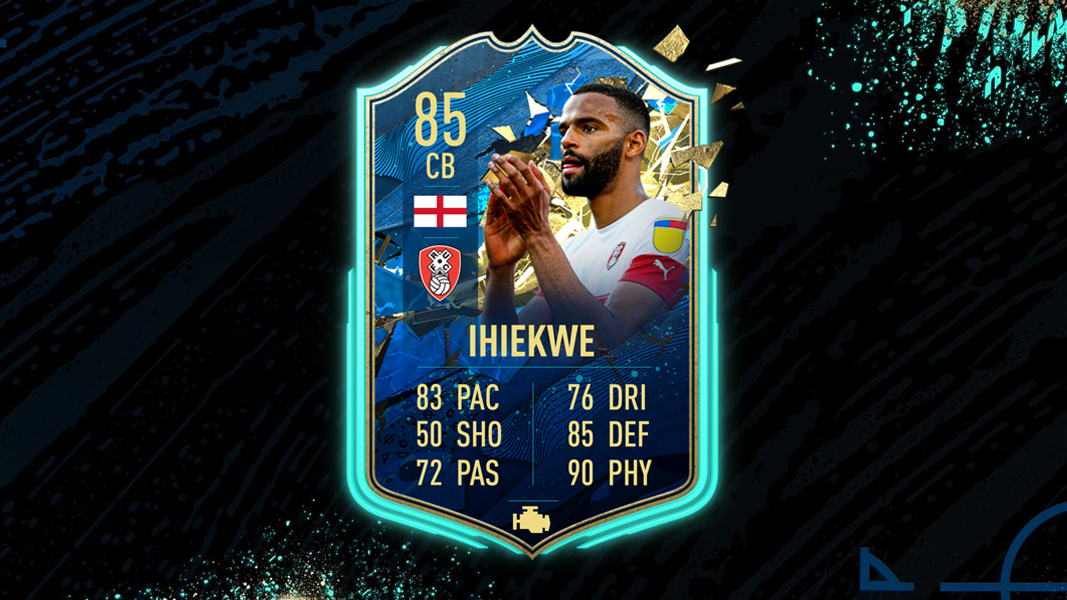 Michael Ihiekwe of Rotherham, while in League One and so not high up on many players’ lists, might be a perfect option to sure up defences.

Despite being in a fairly obscure league, his English nationality means he can be put into a host of Premier League sides. Examples of players he can be put with include one-to-watch Fiyako Tomori and TOTSSF Dean Henderson.

As prices go up, so do the amount of candidates for this list. Both Eberechi Eze and Moussa Dembele are outstanding cards, perfect for players with around 50,000 coins to splash. 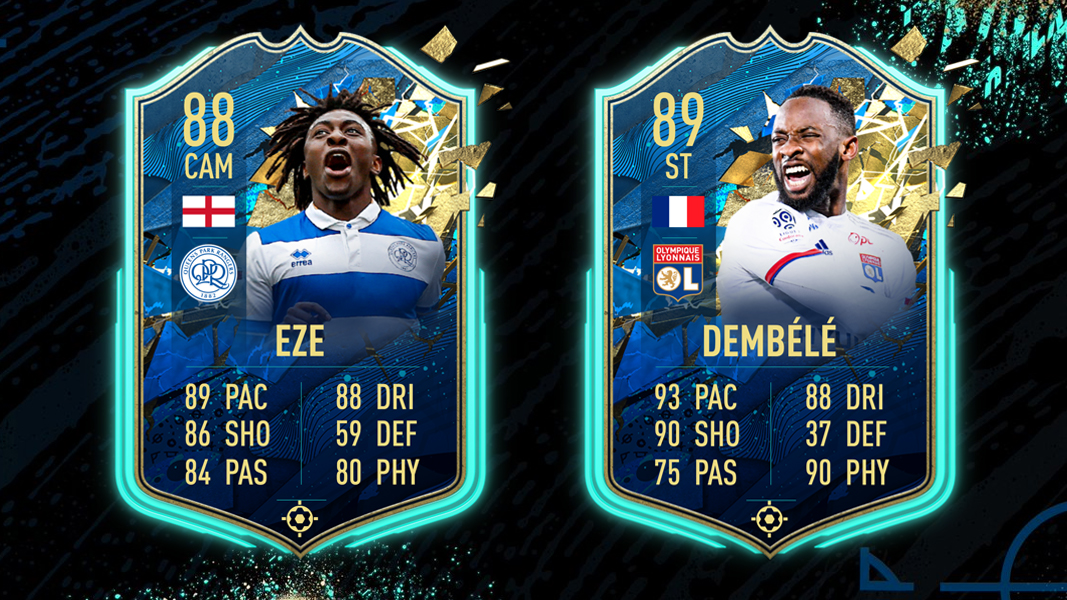 Eze, like Ihiekwe, is not in a particularly favorable league (England’s Championship). However, his English nationality goes some way to make him a valuable addition any PL side that can fit him. With only one stat falling below 80, he could be an incredibly useful asset for your team going forward. At just 33,000 coins, he’s also an affordable one.

Moussa Dembele, at just 48,000 coins, is potentially an even better bargain. Ideal for any French or Ligue 1 teams, his 93 pace and 90 shooting makes him one of the best cheap strikers in FIFA 20. Add 90 physical and 88 dribbling to the mix, and it’s genuinely baffling that he’s available in this price range. Get your hands on him while you can.

For 150,000 coins, there are considerably more options available to players. Here, we’ve chosen three of the best, based on stats and usability. We would have featured Alisson Becker, purely as a result of his 97 overall, but concerns over his height have dampened his appeal. 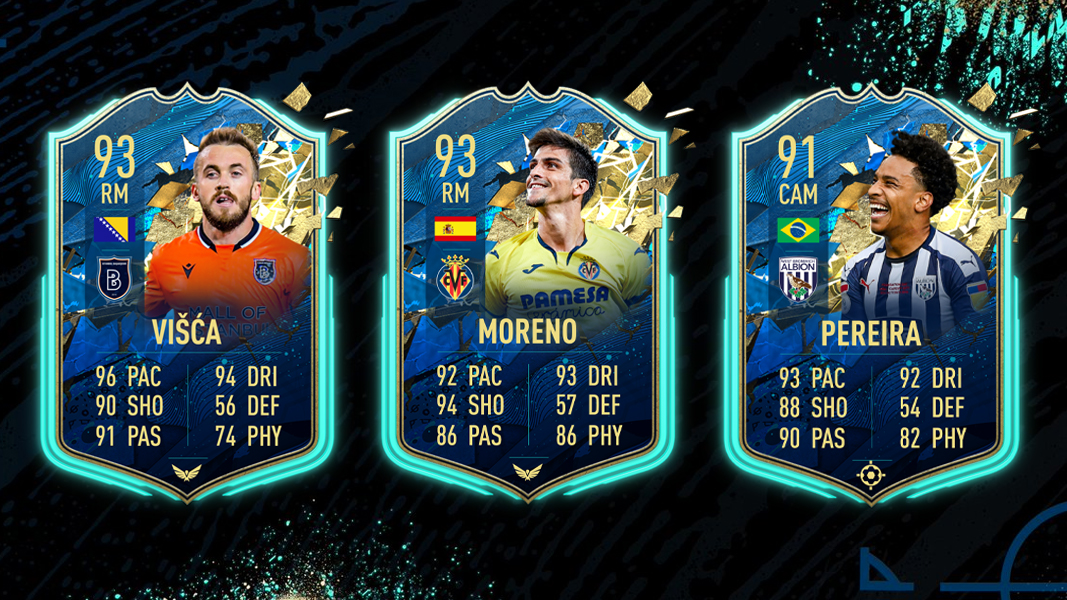 Edin Visca joins the list of those in a pretty undesirable league. However, his Bosnian nationality means he can be linked with some top players, like Miralem Pjanic and Edin Dzeko from Serie A. At just 75,000 coins, four statistics over 90 is a serious bargain, and an undisputed tour-de-force in attack.

Gerard Moreno is similarly effective to Visca. While his passing falls below 90, his physical is upped to a whopping 86. Also, in Spain’s top flight and of Spanish nationality, Moreno is far more flexible than Visca. At 77,000 coins, he’s a must-buy for any side that can fit him in.

Finally, we have West Bromwich Albion’s Matheus Pereira. His Brazilian nationality makes him incredibly versatile and, with just one stat below 82, he is a serious bargain at 95,000-110,000 coins.

Finally, we’ve picked a couple of TOTSSF players who come in at under 300,000 coins. While it sounds like a lot, some TOTSSF cards set players back millions, and would be just a drop in the ocean for some of FUT’s biggest players. So, 300k isn’t as expensive as it sounds. 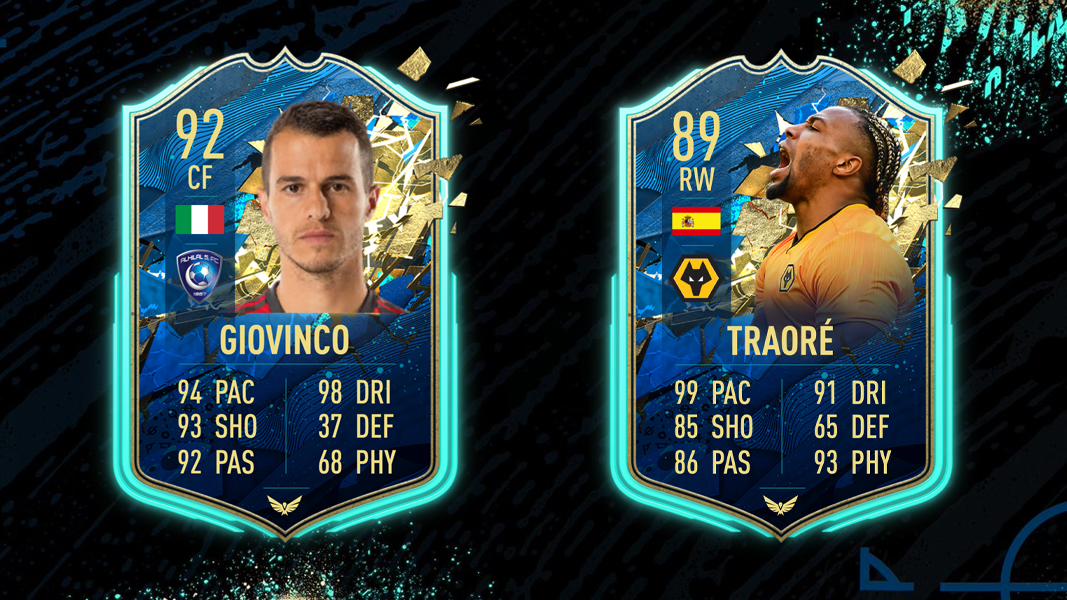 It’s fair to assume that if he wasn’t in the Saudi Pro League, Giovinco’s insane upgraded version would have a much higher price tag. However, with him being Italian there’s certainly a lot of hybrid teams he could fit into. Pair this with 94 pace, 93 shooting and 98 dribbling, and you’ve got an awesome addition for 230,000-260,000 coins.

Finally, we’ve gone for Wolves’ Adama Traore as our second pick. The flying winger received multiple TOTW cards throughout FIFA 20 and has been in fine form for the Foxes throughout the 2019-20 campaign. His TOTSSF card puts the rest to shame.

Its staggering 99 pace, 91 dribbling and 93 physical are just the tip of the iceberg, with 85 shooting and 86 passing making him very much a phenomenal card to pick up. Ideal for any PL or Spanish team, he’s always going to be a handful for any defence. 200,000-240,000 coins is not a lot for such an impressive player.

That brings our tips list to a close. Which FIFA 20 TOTSSF cards would you recommend? Which would you avoid? Tweet us @UltimateTeamUK to let us know your thoughts!