A player has gone up against Everton’s Anthony Gordon in FIFA 21 and it’s fair to say he’s a fan of the ICON cards.

It’s no surprise that certain professional footballers enjoy playing FIFA 21 and building up their squad on ultimate team. It must be such a surreal experience to be able to play yourself in a squad that you’ve customized and created.

Both Mason Mount and Erling Haaland have had their FIFA squads leaked in recent weeks. Needless to say, both their lineups didn’t disappoint and revealed football players take FIFA’s FUT mode fairly seriously.

For Gordon, it’s all about the ICON’s paired with the deadly attacking duo from PSG.

Gordon has been playing for Everton since he was 11-years old.

In a thread posted to the FIFA subreddit, DanngODB revealed Anthony Gordon’s full FUT lineup after he went up against him online.

Gordon has opted to utilize PSG’s attacking force of Neymar and Mbappe in his squad. On top of this, he’s included a number ICON cards, including English football legends Rio Ferdinand and Ashley Cole. 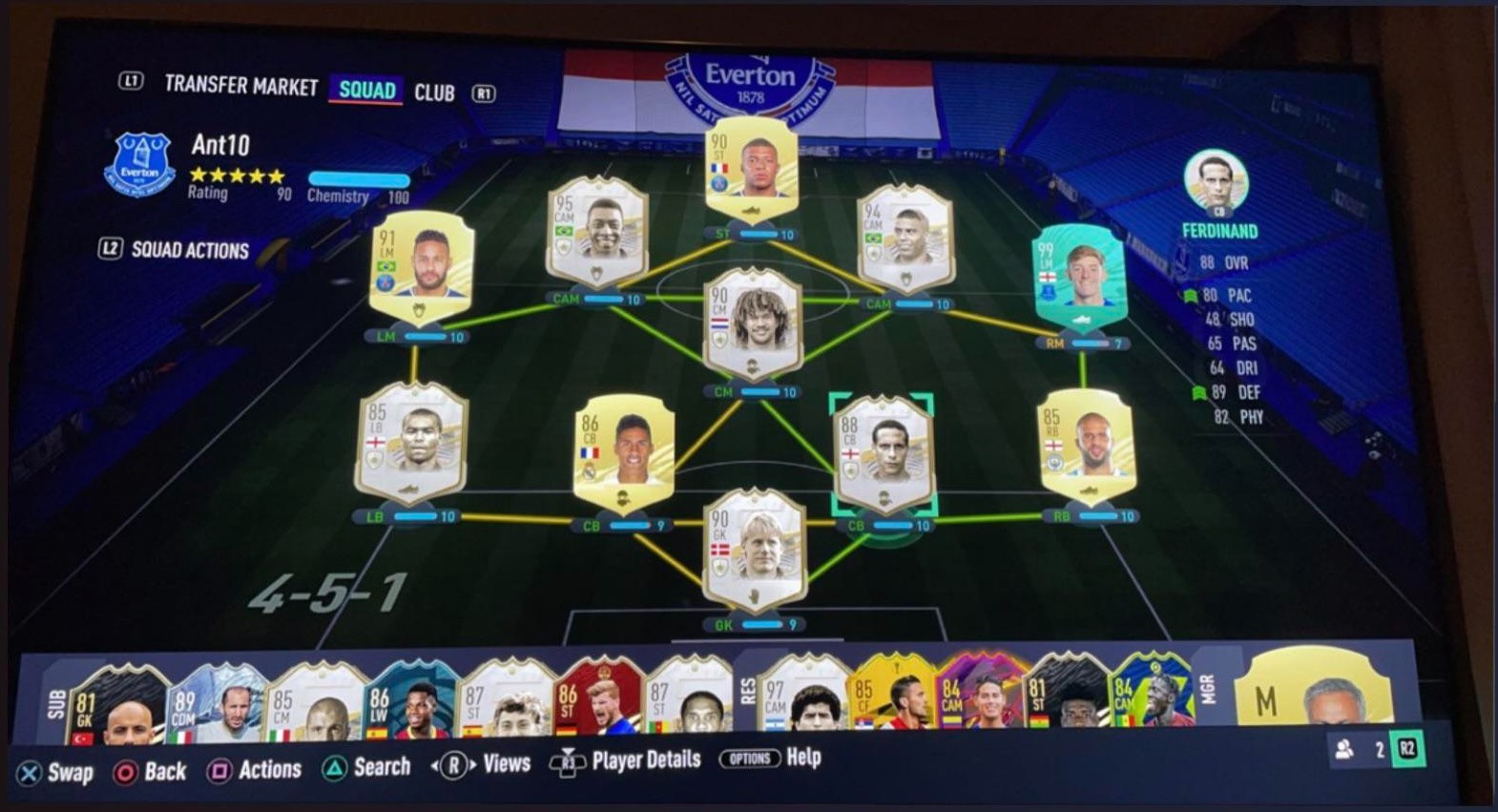 There’s no doubt Gordon is a fan of the ICON cards, but then again, who wouldn’t be when you get to play alongside so many legends.

It’s fair to say Gordan’s lineup is pretty solid. With the likes of Cole, Ferdinand, and Varane in the backline, he’s created an extremely tough defense to get through. Gullit takes up the center-mid position with Neymar and Gordon alongside him.

Finally, the front three is not lacking in firepower or creativity. Mbappe, Ronaldo, and Pele make up a dangerous attacking force that any FIFA player would fear to go up against.

Whether it’s Mount, Gordon, or Haaland, it’s always exciting to see professional footballer’s ultimate team lineups. Keep your fingers crossed and you may run into one of them the next time you jump onto FIFA 21.

In their downtime, many top football players like to take to their consoles to play FIFA, unable to get away from the pitch whether it’s online or in real life.

Rice has become a huge fan-favorite at West Ham in recent years, a holding midfielder that shows promise far beyond what the East London club is commonly associated with, and seems to have built his dream squad around him.

Many top Premier League stars have shown off their top-tier FUT teams in the past, with the likes of Diogo Jota revealing his team as arguably the best FIFA player in the league.

Declan Rice has become a huge asset to West Ham.

While Rice is mainly known for his skills on the pitch, as one of the most sought-after players among top Premier League sides, he’s managed to put together a top team in FIFA 21 too.

Placing himself alongside some of the biggest legends of the game, here’s how Declan Rice’s FUT 21 team lines up:

While the team has a very high rating across the board, there are some somewhat unorthodox picks.

Walker at CB seems a bit rogue, and you won’t often see that in top teams, while you would normally expect to see Ronaldo occupying that striker spot that Rice currently plays Neymar in. In fact, Mbappe on the bench proves Rice might want to have a look at his formation so he can get the French starlet in.

That said, it’s still a valuable team and definitely capable of wiping out opponents with ease — though we’d have to see how Rice himself plays to really judge that.