*Update: two more esports teams have had hashtag emojis added; G2 Esports and FlyQuest – neither of these organizations are involved in Fortnite.

Twitter has launched a new set of hashtag emojis, or ‘hashflags’, representing logo’s of major North American esports organizations – and is possibly linked to Fortnite esports.

Mimicking that of major traditional sports teams, Twitter has added emojis for OpTic Gaming, FaZe Clan, Team Envy and more, although the reasoning is not entirely clear.

Typically, hashflags are only available for a certain period of time, usually to cover a special event or occasion, such as the FIFA World Cup or US elections.

And at first, it appears the only link between these new esports hashflags is that all the organizations that have them are North American. 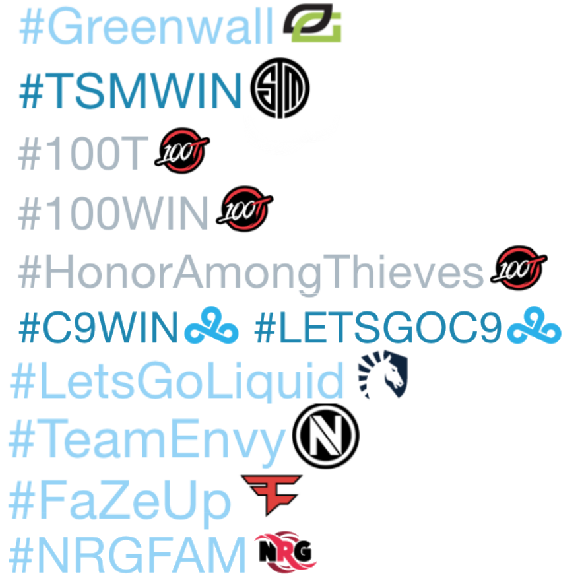 We've enabled custom emojis for some of your favorite teams!#TeamEnvy#TSMWin#C9Win#100Win#FaZeUp#TLWin#FlyQ#G2Army#NRGFam#GreenWall

Just use their hashtags to cheer and Tweet along, and you'll unlock their emoji.

There are a number of big tournaments coming up this weekend, including the PGI PUBG Invitational, CWL Stage Two Playoffs, week six of the NA LCS Summer Split and more.

However, not all of these teams are competing in these events, in fact, there is only one game that all of them are involved in.

Fortnite, which also got it’s own #Fortnite Llama emoji recently, is the most likely link between all these major esports organizations.

All of these teams have players competing in Fortnite, and it is the only game that matches each team across the board.

It perhaps hints at something in the works from Fortnite developer Epic Games, who are currently running their ‘Summer Skirmish’ series.

These new team hashflags, linked only through being North American and all having Fortnite players/teams, could mean that some kind of professional team only event is planned.

Update: Spanish organization G2 Esports and North American ‘FlyQuest’ have both had esports emojis added. Neither of these teams have Fortnite players or rosters, so perhaps these new hashflags are not related to Fortnite in any way.

Esports consultant and journalist Rod “Slasher” Breslau claims to have been told that these new emoji’s are not linked to a specific game or event.

Twitter has added emojis to several esports teams. From what I've been told this isn't tied to any specific game, but is Twitter working to promote esports more on the platform.#Greenwall#FaZeUp #TSM#C9WIN #100T#LETSGOLIQUID #TeamEnvy#NRGFam