League of Legends, Counter-Strike: Global Offensive, Super Smash Bros., and more. Now its teams are going to be backed by the might of the Avengers in an epic merchandise collaboration.

First debuting on the LCS stage during the 2019 iteration of Rift Rivals, Team Liquid’s squad came out of the gates in Captain America inspired uniforms signaling the beginning of the surprising initiative.

The First Avenger – and the best possible fit for @TeamLiquid fans as the championship team fights for the glory of North America. Show your support and get your own Team Liquid x Marvel Captain America jersey: https://t.co/wbzyCLqB8w #LiquidxMarvel #LetsGoLiquid pic.twitter.com/RH3Dk4pjL1

The organization released a full length video showcasing their heroes (players) from all over the world and their winning moments throughout the franchise’s history to announce the partnership.

The video was a slow build up to a stunning reveal for three new jerseys directly inspired by Avengers: Endgame.

The segment was a masterful buildup to a lasting image of various Team Liquid members marched to battle in their Quantum Realm outfits, mirroring the famous scene in the film.

While the video was nothing short of a spectacle, the best reveal came before Team Liquid’s bout against Eurpoean powerhouse Fnatic, in which the team posed with The First Avenger’s shield.

To hype up the moment of NA’s best against EU’s top team, the LoL squad showed a uniform resolve in defending the region’s honor in their brand new apparel. 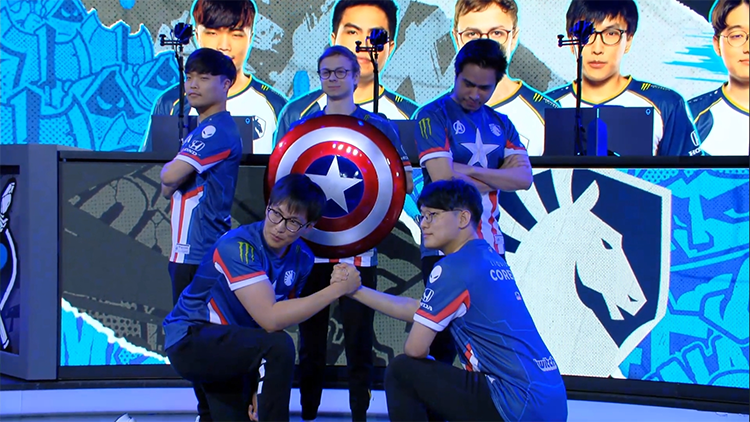 How did Team Liquid and Marvel manage to collaborate

It’s no secret that parent entity Disney is interested in reaching into all forms of entertainment. While fans were unexpectedly surprised by the reveal, people had a clue as to how the partnership came to be.

The org already has a swarm of Marvel-inspired designs available, and it’ll be interesting to see how far this collaboration extends in the future.