The legendary esports organization Fnatic donned the color orange on their social media accounts, teasing a new look that’s set to come out the day before LEC begins. But the LEC went ahead and accidentally included the new logo in their promo video, and now a high-res image of it has appeared as well.

To rebrand in the esports scene is to take a massive risk with your fanbase. In recent memory, most rebrands hope to, at best, achieve a mixed response while others have been met with a very negative reaction.

On January 20th, Fnatic scrubbed their Twitter profile picture and banner, filling them with the color orange and tweeting out “the future is Fnatic.” Fnatic’s founder and CEO Sam Mathews oranged out his pictures too. 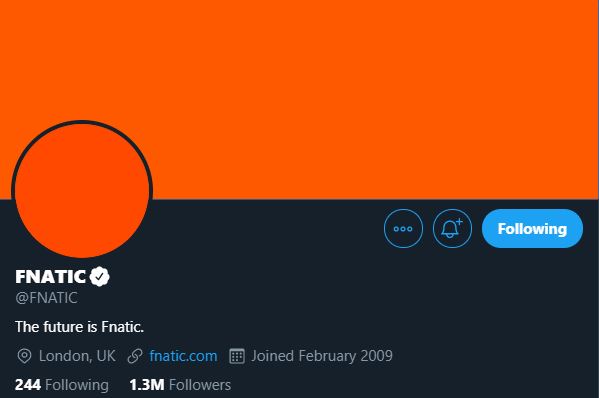 Immediately sensing an imminent rebrand, fans went into panic mode, with several emploring the organization not to change their iconic logo. Even other teams and brands got in on the drama, including the recently rebranded North who replied with “Phnatic,” and former EU LCS team Unicorns of Love.

The alternative future is Unicorns. pic.twitter.com/xjJ1pOQyxY

The potential rebrand appears to coincide with opening weekend of the 2020 LEC Spring Split, where the team is scheduled to play Origen and Misfits. However, the LEC did not appear interested in making fans wait, as in their Jan 22 hype video shared on Twitter, the new logo can be seen on the Fnatic players’ jerseys.

Higher quality stills from the video appear to hint toward a sleeker, “modern” touchup of the logo as opposed to full-on change to it, and just a day later a full, high resolution of the image appeared online.

The new logo features sharper, less rounded edges, removes the growth from one of the side wings as well as the upper dot, and slices a portion of the center line off. As Don ‘FishiestDude’ Constantin so eloquently put on Twitter, it “no longer looks like a man with a giant dong between his legs.”

On the plus side the new @FNATIC logo no longer looks like a man with a giant dong between his legs pic.twitter.com/FeEa2jQufQ

Others expressed their appreciation for the simple, sleek adjustment. Reactions to the new logo on the CS:GO Reddit r/GlobalOffensive ranged from positive to tolerant. Some said they liked the “minimal” and “tidied up” take on the iconic crest, compared to the more drastic rebrands performed by the likes of North, Evil Geniuses, and Virtus.Pro.

The image retains the original Fnatic orange, which is much lighter than the orange currently dominating the organization’s social media pages, indicating that they’re not doing away with the original color.

A version of the new logo in the new dark orange has also been leaked, so perhaps it will be used for alternate jerseys or new merch.

Nothing is officially confirmed yet regarding the new logo, but it’s likely fans will see it make its on-stage debut this weekend at LEC as Fnatic look to add another European LoL title to their trophy case.