During the first week of action during Season 2 of the NBA 2K League, a brawl broke out between Hawks Talon and Celtics Crossover Gaming when Celtics’ player Albano ‘oFAB’ Thomallari pushed Talon’s Randolph ‘Rando’ Moreno as the two went to shake hands following their match.

Unsurprisingly, the League didn’t take long to come up with punishments for the players involved in the scuffle, announcing their decision on April 12.

What were the punishments?

The NBA 2K League announced fines and suspensions for three different players involved in the fracas, two from the Crossover and one from the Talon.

Celtics’ Crossover point guard Albano ‘oFAB’ Thomallari was fined $500 and suspended for one game and small forward Ahmed “Mel East” Kasana was also fined $500 “for his involvement in the altercation,” according to the press release.

On the Hawks Talon side, forward Connor “Dat Boy Shotz” was also suspended for one game, which means he’ll miss the Talon’s April 19 matchup against Jazz Gaming.

oFAB will serve his suspension Thursday, April 25, when the Crossover take on 76ers GC. 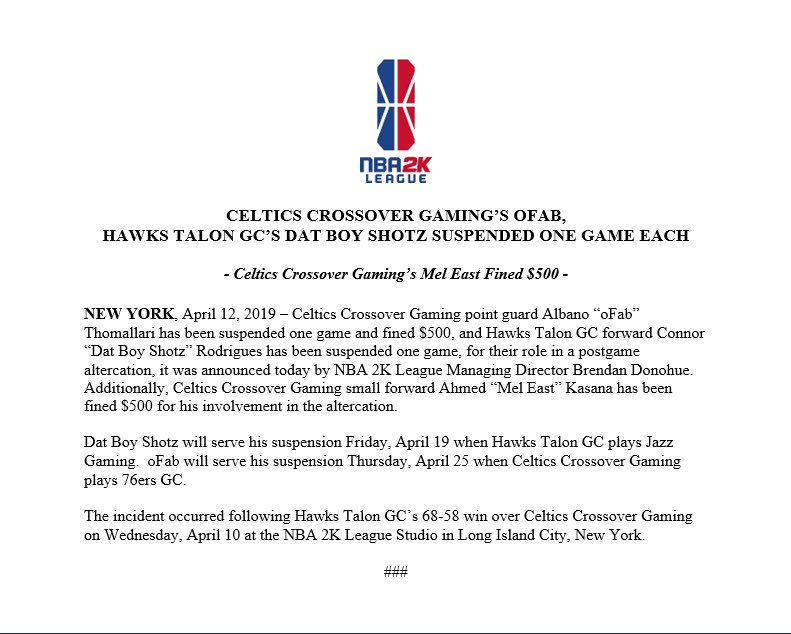 It was the first Hawk’s match of the 2019 regular season, so things have certainly gotten off to a spicy start in the league this year.

Players made little mention of the incident on social media afterward, and Desk host Phil ‘EE’ Visu also avoided going into too much detail when they came back from the break, simply saying “a lot happened” during the incident.

The League may not approve, but the Twitch clip of the shakeup is already one of the most viewed NBA 2K League clips ever and could end up giving the league quite a bit of free publicity.