Tyler1 shows dirty keyboard on stream and viewers are disgusted

Twitch streamer Tyler1 created some nightmare fuel for his viewers after showing them how gross his keyboard was.

On November 16, the popular League of Legends streamer was queuing for a match when he started telling his audience about his keyboard and how nasty it looked.

While many in his chat wanted to see the gross-looking keyboard, Tyler1 started out refusing to give viewers a peek claiming that they “don’t want to see it” and spoke on their behalf.

“I had a f*cking protein shake and I spilled it,” the bodybuilding entertainer explained. “I mean the left side is clean, but the right side, the side I don’t use, is not clean.”

After pondering for a bit, the streamer finally decided to show his keyboard. “I don’t think you guys are ready for this, honestly,” he said before revealing just how grimy his hardware was.

Finally, Tyler lifted his keyboard into his camera view revealing the morbid sight. The whole thing was filled with gunk, dust, dirt and heaven knows what else could be growing or living in between the keys.

Despite his original warnings, the League streamer’s chat got what they wished for and were left mortified. Multiple “ewwws” flooded the chat alongside viewers asking “wtf” it was they were looking at. 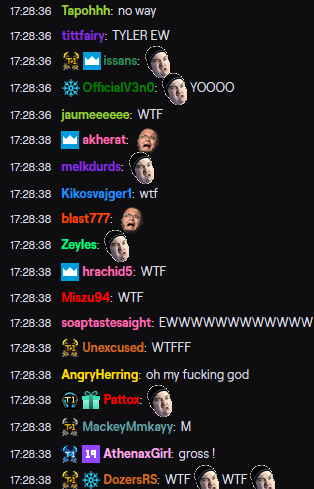 Tyler’s keyboard will be haunting Twitch chat for some time.

“I told you guys you didn’t want to see that!” he reminded them. “It’s not that bad. I don’t keep these keyboards, I replace them. So, when they get dirty, I just toss them out and I get a new one.”

It’s unclear why the streamer didn’t throw out the disgusting-looking keyboard based on his own logic. It will be scary to see how dirty a keyboard has to get for him to finally decide to get a new one.

This isn’t the first time viewers have gotten a look at Tyler’s revolting setup either. In April 2019, his girlfriend showed off the disgusting state of his desk and noted how gross it looked.

It’s possible that Tyler has the nastiest setup out of any top streamer.

There’s no telling when Tyler will finally clean up his keyboard, but until then, his chat will remain haunted with the image burned into their memories.