TSM Hamlinz latest streamer to be hacked by racist trolls

TSM member and Fortnite streamer Darryle ‘Hamlinz’ Hamlin was hacked on Twitter on August 29, becoming the latest streamer to have their account compromised.

Hamlinz’ Twitter account was taken over by hackers who call themselves the “Chuckling Squad” on August 29, and they immediately began posting links to their discord and asking for follows.

One thing in common with all the hacks in 2019 so far have been they all ask for follows almost right away. 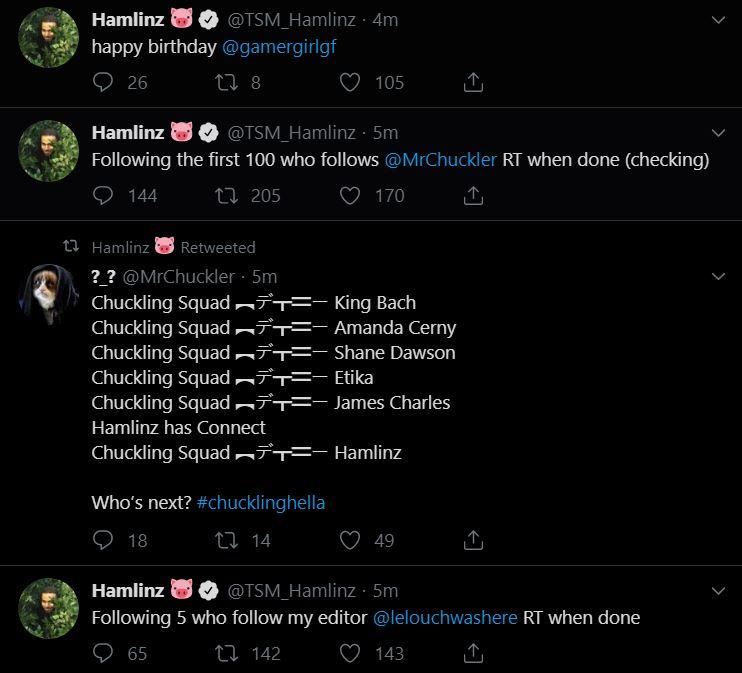 Immediately after posting the links, the hackers started mentioning other streamers, like Pokimane and Ninja, and sending inflammatory messages to them.

“Ayyy @TSM_Myth done piped Pokimane!” read one of many tweets. The hackers also began spamming racial slurs in many of their tweets.

With cases like this, they are usually resolved pretty quickly but considering how late in the day Hamlinz streams, it’s entirely possible has wasn’t even awake when the hack happened.

For what it’s worth, the hackers appear to have a dark sense of humor as they had a cheeky response to someone asking if Hamlinz had been hacked.

“No shit sherlock,” they said to the question. The hackers engaged with a lot of back and forth between fans of Hamlinz who were trying to stick up for him.

This latest hack comes exactly a month after Fortnite World Cup winner Kyle ‘Bugha’ Giersdorf had his Twitter and Twitch both hacked immediately after his big win.

Bugha was able to get to Instagram to explain that it wasn’t him on Twitter but Hamlinz has yet to do so, and it doesn’t really seem like he has to since it’s so clear.

Ninja, Shroud and James Charles have also been targeted by hackers in recent weeks.

Sadly, Hamlinz is just the latest victim in the long line of hacks we have seen in 2019.

We will keep you update on Hamlinz Twitter hack as more information becomes available.