A British man who looks almost like the spitting image of top Twitch streamer Turner ‘Tfue‘ Tenney is taking advantage of his coincidental looks by starting his own Twitch channel, streaming under the name ‘2_fue’.

Earlier in July, reddit user u/draskant had to inform the Fortnite community that he was not in fact Tfue, contrary to the beliefs of numerous individuals who had approached him in public, thinking he was the famed streamer.

In a post entitled ‘No, kids, I’m not Tfue: After being stopped for a photo for the 1000th time I feel obligated to tell the world,’ draskant revealed his uncanny resemblance to Tenney. 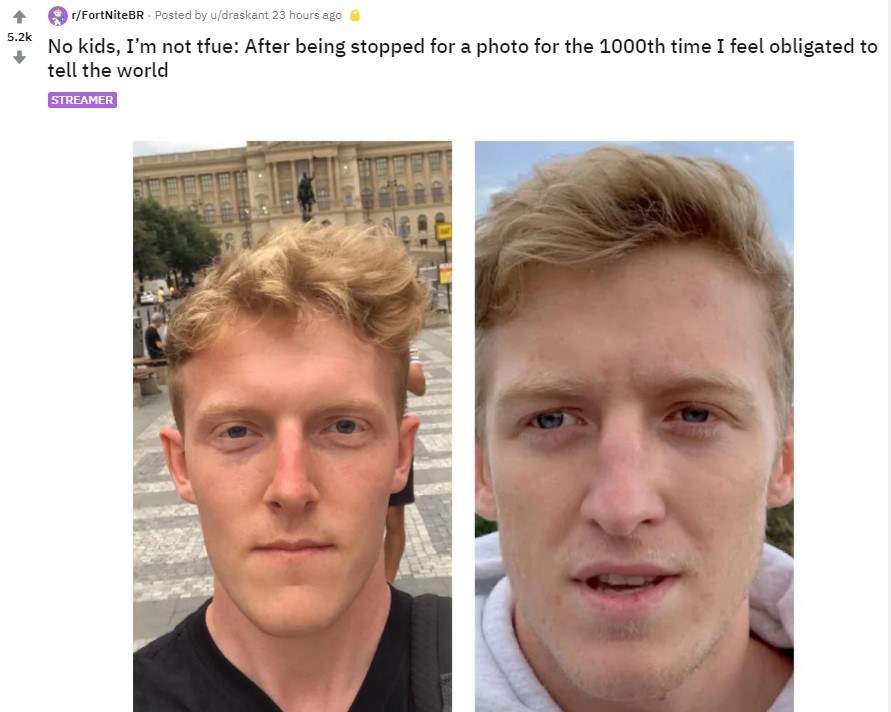 After many fans mistakenly identified him as Tfue, the reddit user had to set the record straight.
600[ad name=”article2″]

The post then went viral on Reddit, and was later spotted by Tfue himself, who suggested he wanted to track down the man and collaborate on some vlog content.

If Tfue actually wants to find him and collab, it won’t be all that difficult now, as ‘2_fue’ has joined him on the livestreaming platform.

Starting his account on July 6 – only days after Tfue spotted his Reddit post – 2_fue began streaming on July 11, and has stuck with it since, gaining over 250 followers in his short time on the platform.

Of course, he may be hoping that the real Tfue takes notice, and the pair duo up for some Fortnite action, which also happens to be 2_fue’s game of choice, perhaps unsurprisingly.

He may look like Tfue, but his skills in game are not quite comparable, with the former FaZe Clan star widely considered one of the best in the world.

If viewers ever feel like watching Tfue without the insane Fortnite talent, 2_fue could be the streamer for them, with his on-stream appearance just as uncanny a likeness.

For those still looking forward to seeing a collaboration, there is hope, as the real Tfue has followed fake Tfue on Twitter.