Jaryd ‘GTA RP during a Twitch stream on September 3, instead jumping into the world of Hunt: Showdown to find just how terrifying the game can be.

The popular first-person survival game was released on August 27, and throws a number of different obstacles in front of players including human characters, dead walkers, as well as wild beasts from the woods.

Having played it, it’s fair to say that summit now knows just how unpredictable the game is, after providing his viewers with some hilarious jump scares. 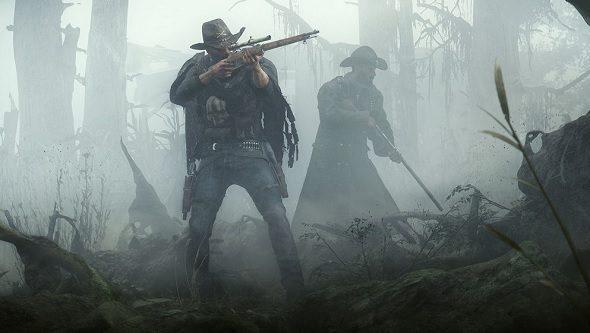 Summit1g decided to give Hunt: Showdown a try on Twitch.

For the former CS:GO pro player, it didn’t seem to matter if it was night or day in-game, with the streamer utterly terrified at a number of moments throughout the game regardless of the light levels.

His first scare came when venturing through a settlement, where he found some chained up animals which could have eaten him alive if let loose. After jumping over a wall to escape the area, it appeared that he was alone in the fields until he heard a huge gunshot whizz past his character’s head.

“Wooo! Ooo! I’m hit. I’m hit,” he yelled, before being shot dead. “That was a bad spot to get fucking caught out dude. That was a bad game.”

The former CS:GO player wasn’t going to stop there, as he dived back into the bounty hunter game, only to experience another shock just seven minutes later. This time, there was a big difference, though, as it was in complete darkness.

As he approached a number of abandoned buildings, and as place appeared to be empty, he set his sights on reaching some high ground.

After hopping over a fence, he dropped into a pit with what looked like a zombie. Once he appeared to have escaped that situation and climbed up a ladder, his character was attacked out of nowhere.

At this point, he had jumped into a pit with the dead and even been shot dead, but the most unexpected moment had yet to materialize.

“Wait, what was that? I don’t know what that noise is,” a nervous summit asked his chat. Soon after, the streamer was given yet another jump scare as he turned around to see a burning zombie sprinting right at him. Luckily, he managed to escape its grasp.

There’s no doubt that the streamer enjoyed the break from GTA RP, despite the hilarious and sometimes scary moments, but it’s unknown as to whether or not we’ll see even more Hunt: Showdown on his Twitch channel in the future.