Summit1g responds to backlash over “innocent until proven guilty” tweet

Popular Twitch streamer ‘summit1g’ is facing backlash on social media over a tweet appearing to criticize how accusations are handled online, following a slew of sexual assault and harassment allegations against well-known content creators and personalities in the gaming industry.

The past week has seen a number of allegations made online against prominent figures in the gaming sphere, but the internet’s reaction to the claims has been “backwards” according to a tweet from summit on June 24.

“Innocent until proven guilty….” the streamer tweeted. “Unless it’s the internet where we do things backwards.”

Summit almost immediately faced pushback on his take from various personalities and Twitter users, including fellow Twitch streamer Asmongold, who suggested that in these cases it’s worth giving both sides the chance to speak.

“It’s possible to support and take someone who’s making an allegation seriously while also not immediately cancelling the person who it was made against,” Asmon replied. “It’s important to give people an opportunity to respond and defend themselves.”

Esports insider Rod ‘Slasher’ Breslau went a step further and suggested that maybe it would have been better if the streamer had kept his opinion to himself on the matter.

“As one of the biggest streamers in all of gaming and on Twitch, if your first comment on social after a week of ~100 women coming forward with stories of special assault, harassment, and misconduct is to say this,” Slasher wrote. “Maybe it’s better you say nothing at all.” 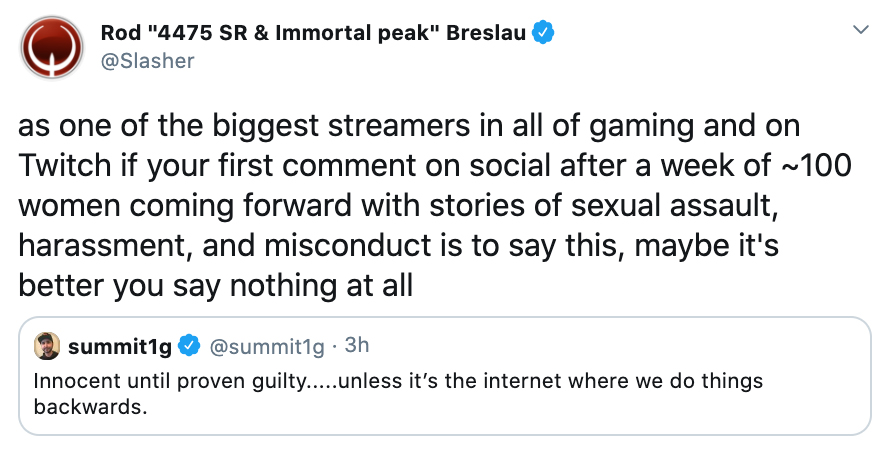 Summit hopped on stream shortly after making the tweet and almost immediately addressed the outrage surrounding it after viewers brought it up.

“It’s hard to hold myself back sometimes, I’m only human you know? And I have opinions and we’re not all going to share opinions,” summit said on stream. “No matter what you think, no matter what you say, no matter how righteous your cause may be, there’ll always be someone that disagrees.”

“I am just simply stating that while people are making very, very clear that sexual assaults and things like it are happening at real-life events and that people are people are getting called out,” he added. “I just also want to make it very, very clear how dangerous it is to run someone’s name through the mud like that if it’s not 100% true.”

Despite his on-stream explanation, the broadcasting star continues to face backlash over his post due to the current environment in the gaming and streaming space.

Stay tuned to Dexerto for more as this story continues to develop.