Twitch streamer SoaR Mala was midway through a game of Apex Legends when disaster struck involving his glass desk.

As a content creator for SoaR Gaming, Mala is an FPS gamer who mostly prioritizes games like Apex Legends and Counter-Strike.

He was playing the popular battle royale during a September 5 livestream, and doing quite well to boot, when complete chaos unfolded before his and all of the viewers’ very eyes. 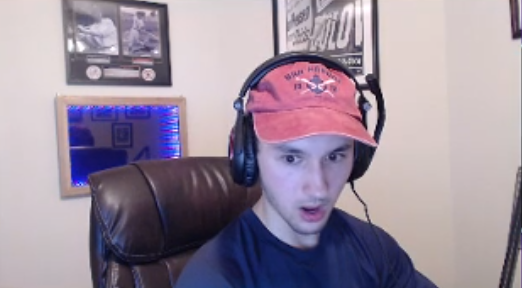 Seemingly out of nowhere, one of the monitors in his setup crashed down and completely shattered the glass desk below.

Getting a glass desk probably wasn't my best decision #ripmysetup2019

Sharing pictures on Twitter, he showed how the entire setup was impacted by the unfortunate event, as well as some blood on the wall from the thousand shards of glass that exploded all over the room.

“Getting a glass desk probably wasn’t my best decision #RIPmysetup2019,” he tweeted. “The aftermath (yes that’s blood on the wall)”

the aftermath (yes that’s blood on the wall) pic.twitter.com/sBz7L78trK

Once the shock of the situation wore off, many began theorizing on Reddit as to how the freak accident could have occurred.

User ‘Zakkimatsu’ chimed in, suggesting that the “heat from the PC” combined with the effects of the air conditioning “freezing the room,” is what could have caused the accident.

Conversely, user ‘5minutelettuce’ argues that “the boom arm was clamped too tightly on the desk and the desk eventually gave way with the tension of it leaning over for so long.”

Whatever the cause may have been, this should serve as a safety warning to anyone out there gaming on a glass desk right now.

You definitely don’t want to be featured in the next viral clip if the same unfortunate tragedy happens to you.