A popular streamer was live on YouTube when local police put him in cuffs, placing him under arrest for breaching drinking in public laws and ‘assault by threat’ in Austin, Texas.

The world of IRL (In Real Life) streaming can be a bizarre place, with the some of the most popular taking viewers on a daily journey where they attempt to be as entertaining as possible – with a mixed bag of results.

Some of the most well-known include the likes of ICE_POSEIDON and his entourage, who have been involved in countless controversies in pursuit of exciting content in their 24/7 IRL coverage of their daily lives.

One such streamer is ‘Hampton Brandon’, an IRL broadcaster who has been previously banned from just about every streaming platform including Twitch, YouTube and even periscope in the past.

While live on YouTube in Austin, Texas, two police officer’s arrived on the scene and immediately apprehended the streamer, real name Brandon Grosso.

It has been speculated that viewers of his stream perhaps called the police, an essentially would might be called a swatting incident, although this cannot be confirmed.

The moment Hampton Brandon was arrested can be viewed below, the original YouTube stream has since been taken down. In the clip you can see Brandon comply with the officer’s requests, so it is unclear from this section why he was charged with Assault by Threat.

Also, oddly, at the start of the clip, the officer addresses Brandon as “Mr Poseidon”, which hints at them possibly being given a report of the infamous ICE_POSEIDON, rather than Grosso himself.

The arrest record was later found and posted to Reddit by u/HurkaDarpa, showing full details and charges which Grosso faced.

He has now been released from custody, and has since posted on Twitter with his common tagline ‘Ten Toes Down’. 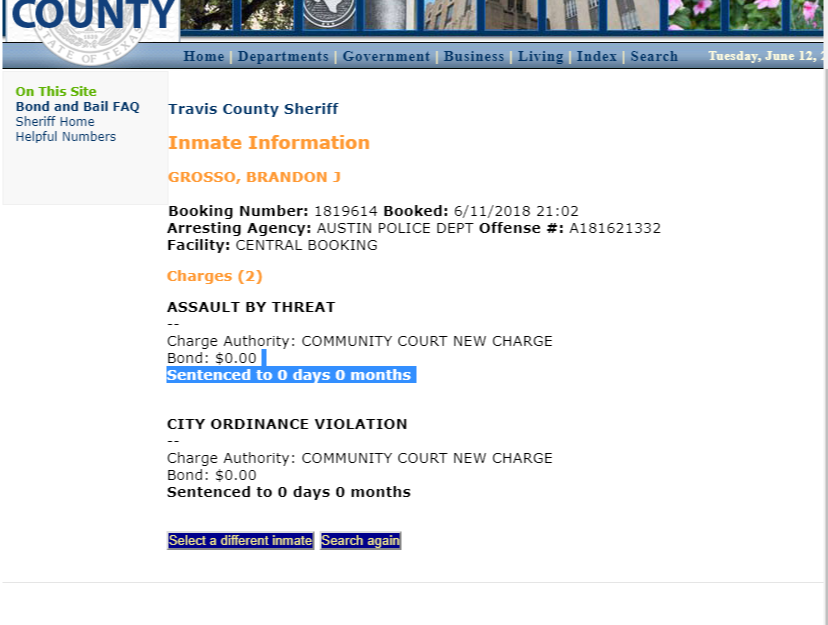 At the time of writing, it is unknown if YouTube, where Grosso was live at the time of the incident, have or will hand down any disciplinary action, or if any of the stream content breached their terms of service.