Twitch personality Pokimane has taken to Twitter to criticize recent TikTok drama for making her “head hurt”, as she implores users to think more about the “consequences” of their actions.

One of Twitch’s most popular streamers, Imane ‘Pokimane’ Anys, knows a thing or two about the pressures of being an online influencer. With over 5 million subscribers/followers on Twitch and Instagram, she’s considered to be one of the faces of the platform.

But, naturally, this popularity has come at a price, as she previously broke down during a Twitch interview about her struggle to separate her private persona from her public one.

Most recently, she hit out at neighboring influencer hub, TikTok, calling the drama on the platform “sh**ty” while also taking aim at some of the more illogical comments.

Away from Twitch, Pokimane is keen to keep her private life private.

She suggested that social media “isn’t good for anyone – not the creator or the user,” attributing the blame for that on the claim that “people online want the insight of a family member but the responsibility of a stranger”.

Hitting out at fans for refusing to take accountability for the hate they send content creators, Pokimane noted that such people want to “know it all and hold others to unrealistic standards, all while not thinking twice about their own actions or consequences.” 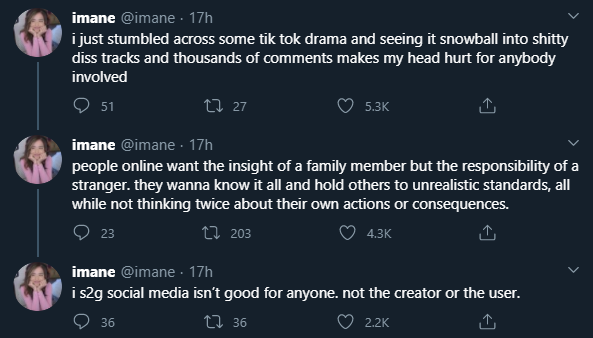 Although recent TikTok drama has evidently given Pokimane some perspective, it is clear that she also, in some ways, is using her own negative experiences as a popular public figure on the internet.

Compared to personalities on TikTok, the streamer is a lot less forthcoming about her personal life, such as the fact that she doesn’t believe in making her relationships public, telling fans, “I personally made the decision seven years ago when I got into streaming that I don’t want my personal life to be part of my content.”

She has also amassed her fair share of criticism from fans in the past, like when she was accused of “clout chasing” for using a VT model in her streams, whilst other users claimed that nobody watched her streams for her “gameplay or personality”.

Pokimane amassed a lot of criticism for recently debuting a VTube model for streams.

It is clear that the pressure that comes with being an internet personality, whether Twitch or TikTok, is insane. So, it’s no surprise that Pokimane made the decision to take a break from streaming for mental health reasons last month.

Many people have taken Pokimane comments to be a thinly-veiled response to TikTok star Griffin Johnson’s diss track about Dixie D’Amelio and new squeeze Noah Beck.

Whilst Johnson never named D’Amelio or Beck in the song, some of the allusions were clear. Clearly taking a swipe at D’Amelio for alleging that he cheated on Twitter, one of the lines of the song included: “She said I cheated, that’s just f*****d up, but you believed it, ain’t that convenient.”

After the track dropped on September 2o, this led to D’Amelio using the backing track to post a TikTok detailing even more cheating allegations against Johnson, with Hype House’s Bryce Hall even weighing in to call out the Hype House’s “disgusting habits” and volatile response to the track.

Johnson has seemingly backtracked, taking his track off streaming platforms like Apple Music and Spotify, but it didn’t stop the damage from being done, as the whirlpool of drama led to a lot of people commenting and, thus, setting a perfect example of what Pokimane was frustrated about.