A partnered Twitch artist has received her second ban from the platform after drawing suggestive pictures of video game characters, in spite of her best efforts to meet the site’s Community Guidelines – and she’s terrified of losing her livelihood.

Twitch “pin-up” artist Saruei is a full-time streamer, who broadcasts herself creating artworks of self-described “lewd” renditions of characters from the “Fate/Grand Order” games and other anime series.

After receiving a warning from the site in October that her drawings were “too sexual,” the streamer was hit with a three-day ban in mid-September for “suggestive sexual content” – but that wouldn’t be her last ban from the site. 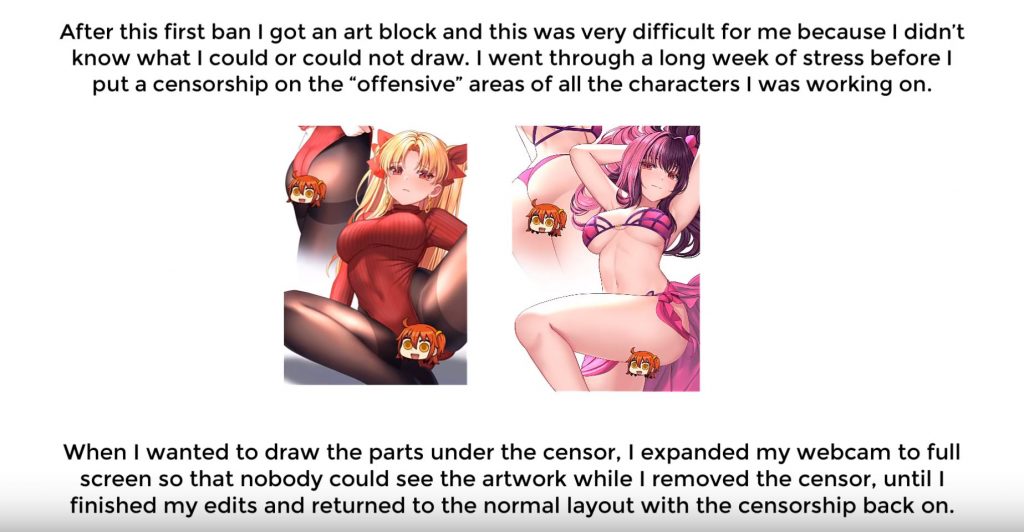 After her first ban, Saurei attempted to censor her drawings – but that wasn’t enough, and she was banned a second time in late November.

Saruei has since been hit with yet another ban from the platform, in spite of her best efforts to “censor” sensitive bits of her characters’ anatomy and even remove the pictures altogether when focusing on their more suggestive parts.

This prompted the streamer to upload a video to YouTube discussing her issues with Twitch’s handling of her content, pointing out that streams like body painting or broadcasters wearing suggestive clothing in the “Just Chatting” category is allowed without complaint.

I can't believe i got banned again, it just came out of nowhere since last time i streamed was this sunday.

After getting my really first ban, i've been putting censoring my art even more and everywhere on my work and I tried my best to make them looks more family friendly. Why? pic.twitter.com/SnGACwOfL9

In spite of her best efforts to meet Twitch’s standards, Saruei is afraid of losing her job, as the site provides her base income – which could be taken away forever, should she receive a permanent ban from the platform.

“After my first ban, I kept having nightmares at the idea of receiving a permanent ban,” she explained in her video. “…you have to understand that this is my job that I might be losing now. I don’t think there will be anyone out there who wouldn’t feel stressed about the idea of getting fired from their workplace.”

This isn’t the first time Saruei has taken issue with Twitch, by far: in fact, the streamer has lashed out at the site twice for their seemingly “unfair” handling of her content, despite drawing on the platform for over a year.

Twitch’s community guidelines restrict “content that involves nudity or is sexual in nature,” and while the site “understands that some nudity or sexual content might be intended for educational… purposes,” it will continue to prohibit such content in light of “the diversity in age and cultural backgrounds of our global community.” 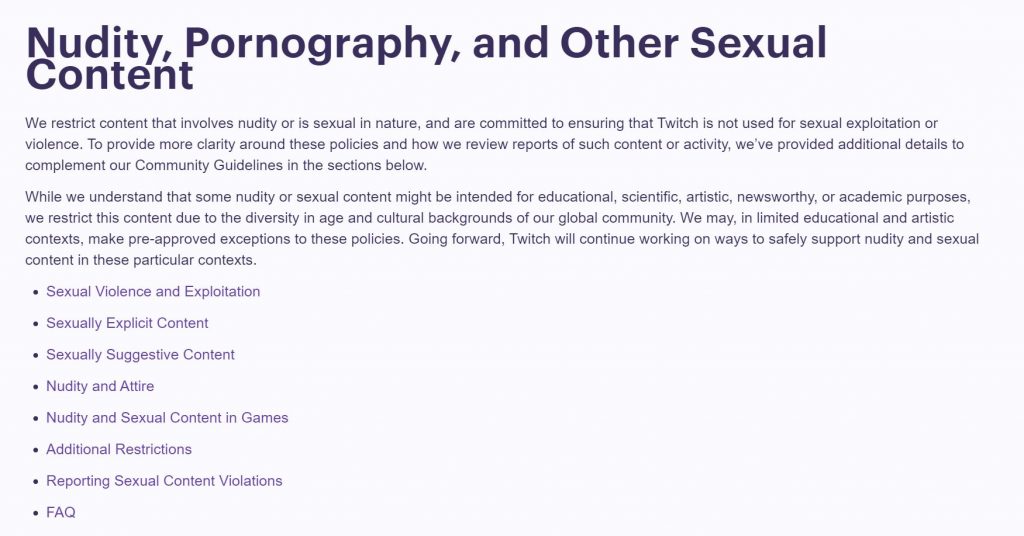 Saruei’s complaints follow a slew of outrage concerning Twitch’s controversial moderation decisions on the site as a slew of top streamers migrate from the platform to other services like Mixer and Facebook Gaming.