Swedish YouTuber PewDiePie might have made several startling comebacks to retake his position at number one on the YouTube rankings, but it looks as if T-Series is now the one storming towards the 100 million subscribers mark.

There have been some big shifts in the sub counts of these two colossal channels in March and April. At one point, T-Series reached a lead of 100,000 and many mainstream media outlets wrote PewDiePie off right then and there, only for him to steer 400,000 clear soon after.

The Indian production company isn’t showing any signs of slowing down at the wheel this time, though. After successfully putting forward a takedown order to have PewDiePie’s new diss track – ‘Congratulations’ – banned in India, they have since managed to record their highest lead yet. 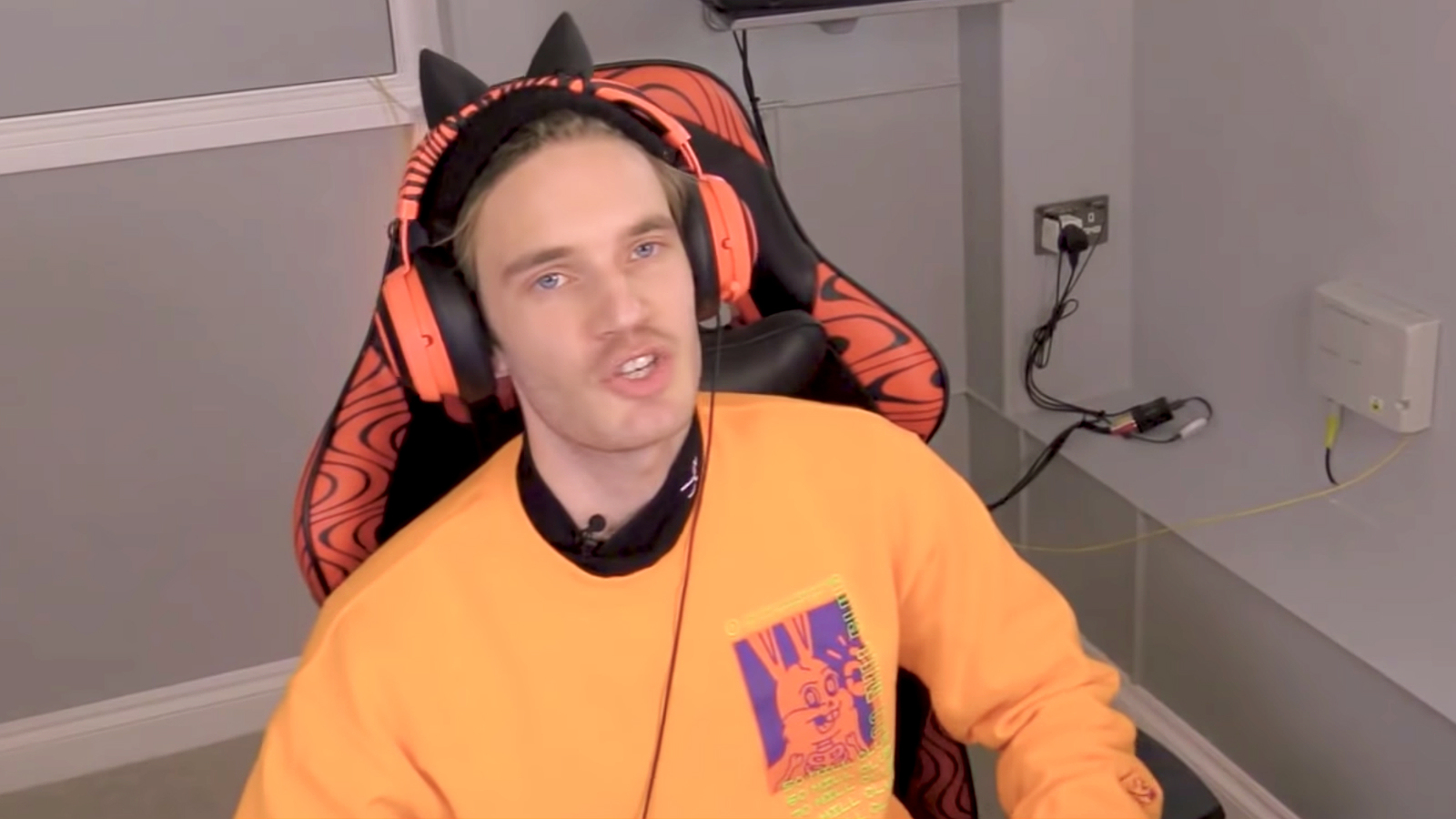 PewDiePie and T-Series are no longer neck-and-neck in the race to reach 100 million first.

As a number of shifts in the race to 100 million subscribers have already proven, no matter how large the gap is at any given time, there’s always a chance that one of these behemoths could bounce back.

However, surely fans of PewDiePie are starting to worry that his YouTube crown has been snatched right from his hands.

Fans can watch the race between the two channels below thanks to a live feed of their respective subscriber counts provided by FlareTV, a channel run by two Canadian teens who took advantage of their battle to create one of the most-viewed live streams in YouTube’s history.

The Swedish internet personality hasn’t just been taken over by T-Series, but he’s being dominated by a lead that looks to be hovering around the 750,000 subscriber figure – the most impressive margin achieved by his rival.

Some changes in the statistics have been both shocking and dramatic in recent times, with the release of new video content on the channels proving to be a catalyst for both parties. Therefore, expect things to change as the pair approach the next major milestone of 95 million.

Fans of the Swede do have a potential trump card up their sleeve, though, as International PewDiePie day is set to launch on April 29. Whether or not that will be enough to secure top spot once again remains to be seen, but it’s going to be tough – that’s for certain.

What’s been happening between PewDiePie and T-Series?

As mentioned earlier, the Congratulations diss track has caused quite the stir in the rivalry between the two channels. While it might have proven to be highly popular in Pewds’ circles, T-Series have launched take down orders against both the new track and ‘Bitch Lasagna’ to have the videos blocked in India.

PewDiePie’s editor, Sive, later revealed that the diss tracks are unavailable to watch in the country, with comments disabled on both videos.

The videos still appear as normal in other countries, but fans of the YouTuber in India will no longer be able to watch the original versions.

PewDiePie vs. T-Series: A History

PewDiePie has been on the brink of defeat on a few occasions now, after analysts noted that the T-Series channel would surpass him in early 2019.

The YouTuber then “declared war” on T-Series shortly thereafter, recording his infamous diss track, ‘Bitch Lasagna,’ which now has over 167 million views and is Kjellberg’s most-viewed video on his channel.

Popular YouTuber Jimmy ‘MrBeast’ Donaldson then created a massive ad campaign across his entire city in an effort to boost PewDiePie’s numbers, which shot up astronomically in response to the insane project. MrBeast later brought their war to the 2019 Super Bowl, where he and his squad wore a series of shirts that read, ‘Sub 2 PewDiePie’ on live television.

As their war got closer, celebrities like political commentator Ben Shapiro and even Tesla CEO Elon Musk made an appearance on ‘Meme Review,’ similarly lifting PewDiePie to the top.

T-Series’ CEO Bhushan Kumar posted a video to Twitter on March 6, urging T-Series’ fans to subscribe to the channel in an effort to defeat PewDiePie for good.

We’re on the brink of becoming the world’s biggest @YouTube channel. We can make history. We can make India win. Subscribe to @TSeries #BharatWinsYouTube https://t.co/izEu8dzHdf pic.twitter.com/dJumzHwADa

Who will come out on top… PewDiePie or T-Series?

Kjellberg might have fallen behind T-Series a number of times now, but has managed to make a comeback – despite “not understanding” why – time and time again.

During their battle, both PewDiePie and T-Series have managed to hit major milestones, first reaching 70 million subs before hitting a record-breaking 88 million subscribers shortly thereafter. 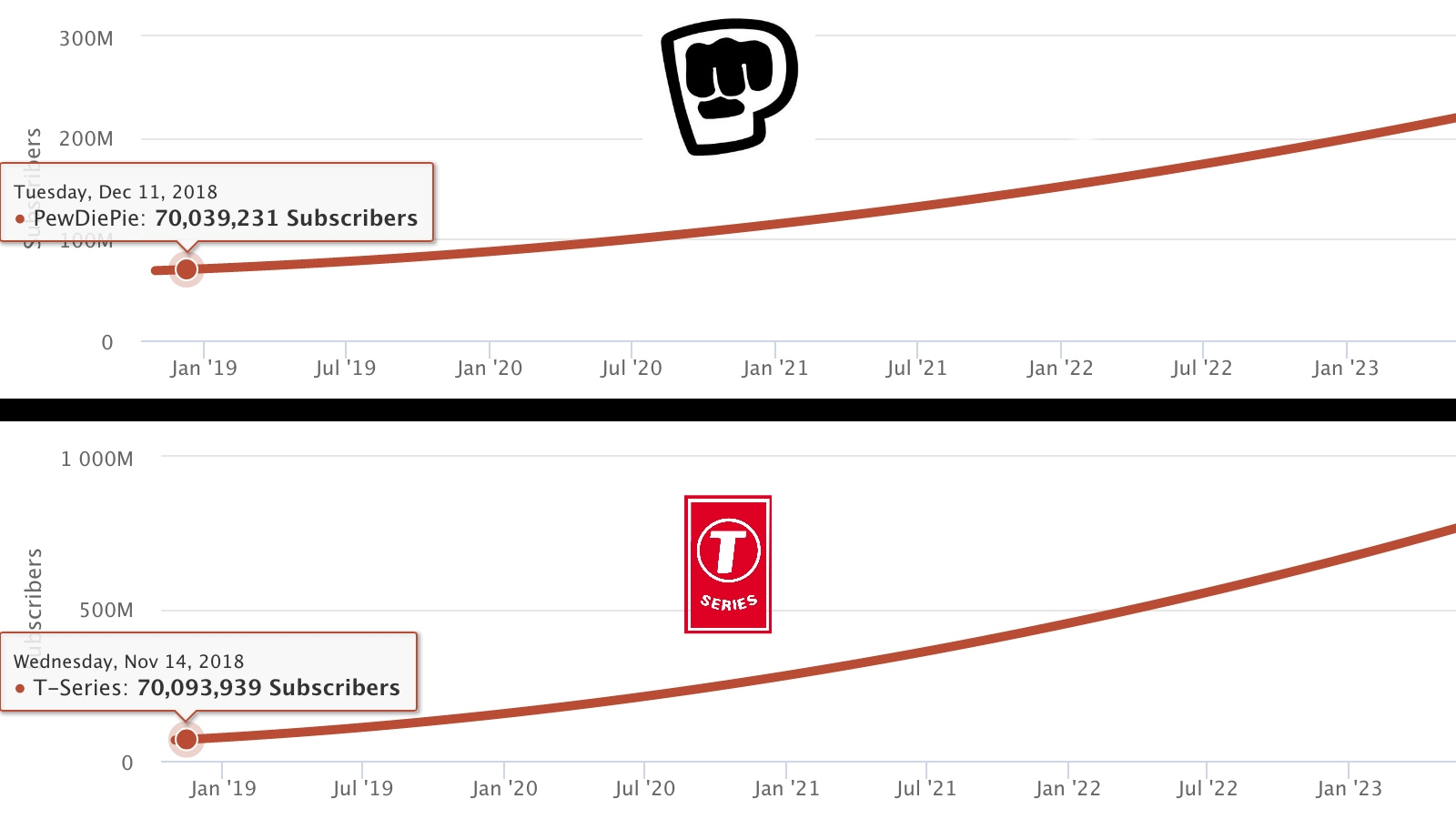 PewDiePie has picked up a slew of milestones in his race against T-Series, currently sitting at over 93 million subs as of April 4.Estimates via Social Blade from November, 2018.

It’s been a back and fourth contest with his Bollywood nemesis, but current statistics would suggest that PewDiePie and his fans are now relying on that upcoming International PewDiePie online event to help bring him back to where they think he belongs – in top spot.

Who will reach 100 million first? Only time will tell.

Whatever happens, though, PewDiePie’s battle with T-Series will go down in history as one of the internet’s greatest moments in time, thanks to the efforts of his dedicated fanbase.