PewDiePie takes his YouTube battle against T-Series to virtual reality

King of YouTube Felix ‘PewDiePie’ Kjellberg took the battle against T-Series to the virtual space to show that he’s not backing down from the drawn out affair.

Even though the subscriber gap reached critically low numbers at one point, the Swede made a startling comeback after he had Elon Musk and Justin Roiland host a segment of Meme Review.

Now that the gap is at a healthy 100,000 sub lead, a reinvigorated PewDiePie is taking the fight to the Indian music label through the virtual reality game GORN. 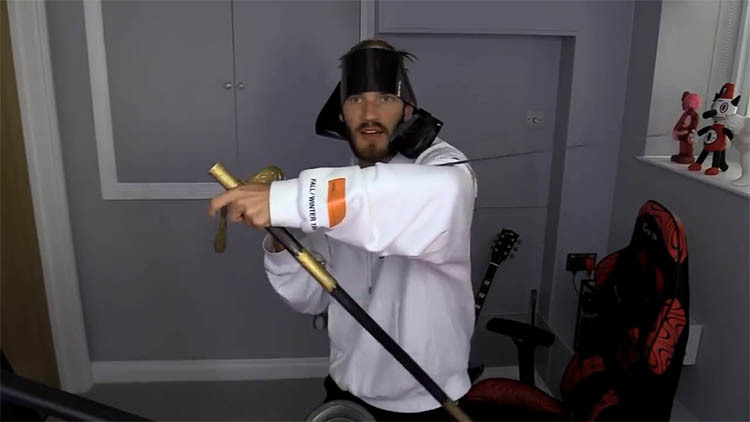 PewDiePie has fought back from a narrow lead against T-Series to keep the top spot on YouTube.

GORN is a gladiator simulator where players fight against waves of incoming enemies. PewDiePie used the game’s latest level as a metaphor for T-Series in his never-ending fight to stay ahead of them.

“Sweden has been a peaceful country, but not anymore,” PewDiePie said. “Now of course, I would never incite violence toward T-series, but in a hypothetical scenario, you versus me, I’m gonna show how that would look like… There’s a new level called ‘Crab,’ that’s cause I know T-Series are crab people. God damn crap people.”

What followed was a 10-minute foray against “T-Series” as PewDiePie hacked and slashed away through his relentless competition.

Even though the video was a parody of PewDiePie’s will against the company, it was a hilarious representation of the actual effort to stay ahead of his competition.

Like many times during the struggle keep the title of YouTube’s Most Subscribed Channel, PewDiePie came close to being knocked down many times. But the longer the fight continued the more weapons, aka celebrity assistance, the Swede obtained to fight back against T-Series.

At the end of his playthrough he spoke directly to T-Series saying that he hopes “he made himself clear” that he wouldn’t go down without a fight.