PewDiePie reveals why he won’t be doing any more Dr. Phil YouTube videos

It appears that Felix ‘PewDiePie’ Kjellberg‘s YouTube channel will see an end of an era as the YouTuber will no longer be doing his popular Dr. Phil reaction videos.

Over the past year or so, PewDiePie has been regularly uploading reaction videos to Dr. Phillip McGraw’s popular television show, in which the famed psychologist applies his expertise to help his guests with their issues.

Many of those who go on Dr. Phil are interesting people, to say the least, and Pewds has taken full advantage of the show’s more ridiculous episodes to make hilarious content for his channel.

Unfortunately, on March 11, the Swede announced via a new video that he will no longer be doing reaction videos of the show because all of the previous videos featuring Dr. Phil have been copyright struck.

“All my copyright videos got claimed by SonyTV,” he said. “All of them. They struck out of nowhere. I wasn’t even prepared.” 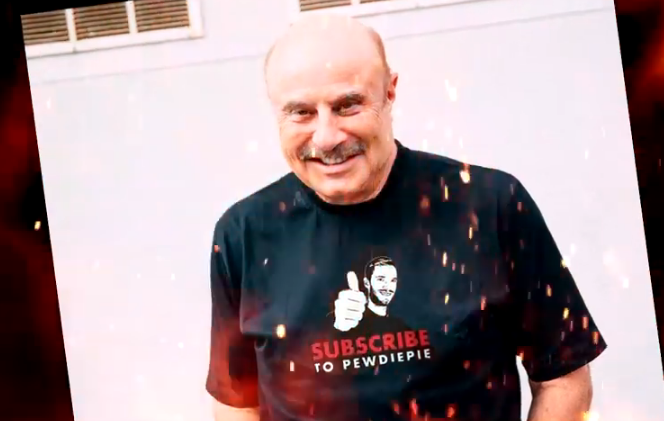 In classic PewDiePie style, the King of YouTube’s newest video is as melodramatic and exaggerated as it gets, featuring pained facial expressions, black-and-white visual effects, and dramatic music.

He even included a hilarious photoshopped image of Dr. Phil wearing a “Subscribe to PewDiePie” t-shirt, while jokingly commenting that his videos were helping give “traction” to the psychologist’s show.

“You know, Dr. Phil wore my t-shirt, so I thought he was a pro.” he said. “I thought he would appreciate my videos and understand that it gave traction to his show. This of course means no more Dr. Phil videos! I know I’m crying too, and I have been crying.”

While Pewds is probably not going to worry too much about the financial loss he took from having all of his Dr. Phil videos copyright struck, he does now has one less option in his toolbox of content for future videos.

This all took place, of course, during his heated YouTube race against Bollywood label T-Series, who are getting closer and closer to overtaking him as the most subscribed-to channel.

As things stand, the Swede’s lead over T-Series is at just around 21,400, and he looks set to become the first YouTuber ever to reach the 89 million subscriber mark.