YouTube superstar Felix ‘PewDiePie’ Kjellberg’s quest to summon the Wither finally came to fruition in Minecraft and it was every bit as awesome as we expected it to be.

For anyone following his massively popular Minecraft series, the biggest storyline running throughout the series so far is his quest to take down the three-head boss mob.

Now the epic saga has finally arrived at its climax, the Swede took his ‘army of 96 million pigs’ and decided to summon the infamous mob boss, making for an epic showdown that lived up to the hype.

The fate of his army of 96 million pigs

In his August 7 episode, the YouTube superstar executed his diabolical plans for his army of pigs as he finally got the break he was looking for when a thunderstorm showed up.

Using his trident that had the ‘channeling’ enchantment on it, Pewds threw the spear and screamed in excitement as electricity reigned down and transformed his pigs into ‘Zombie Pigmen’ soldiers. “Whoaa! Woo hoo hoo. Our army!” he yelled in excitement, as his plan actually worked.

“I can make the freaking thunder baby”, he excitedly said, as he went on to convert the rest of his pets into his army. “By the power of Zeus! This is so bad ass dude!” As he looked upon his massive hoard of soldiers he gave the battle cry: “Tonight, we kill finally one of the first bosses!” 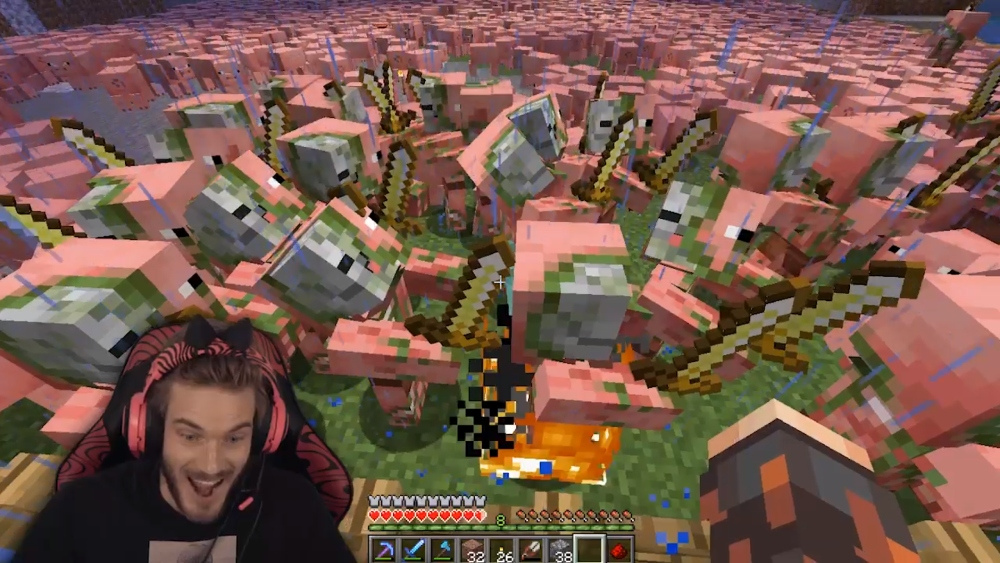 The Battle with the Wither

PewDiePie used the three wither skulls he obtained in the Nether and finally summoned the boss as epic music swelled. It immediately took off in the air and begin raining down skulls that exploded the land around him.

Unfortunately for the swede, his zombie pigmen army didn’t seem to help much, as the Wither stayed in the air. “Thanks for nothing zombie pigmen! My god! He’s destroying everything!”

Using his enchanted bow, he kept shooting at the areal boss, and had to retreat underground to escape his attacks. Even worse, it seems that the Pigmen were actually healing the Wither, making his entire plan backfire on him. 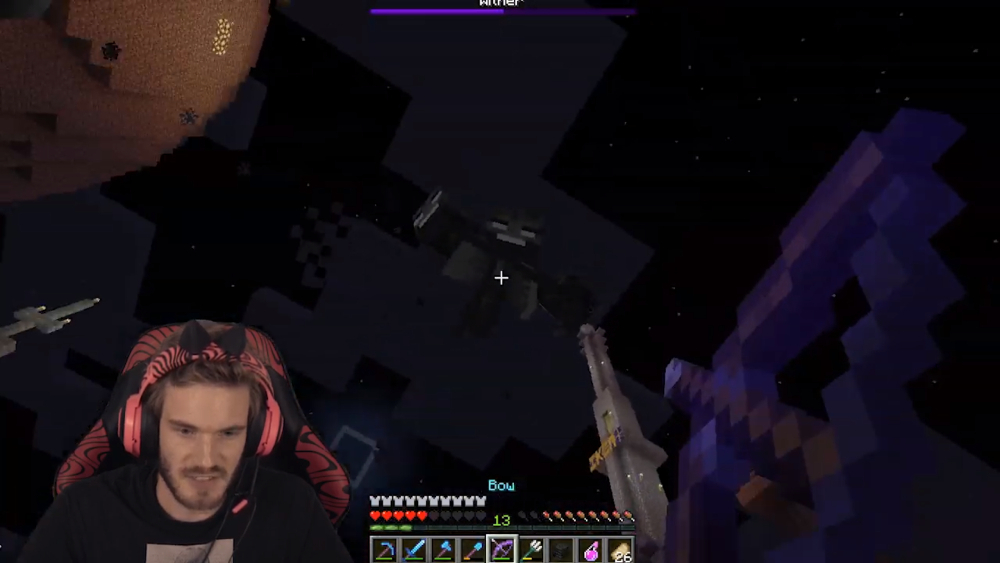 The Wither quickly took the sky, as PewDiePie is left shocked at how difficult the boss is.
[ad name=”article4″]

Victory in the dawn

As the dawn began to break, the Swede then got close to the Wither on a hill, and used his sword to attack him. After minutes of slashing, he finally landed striking the final blow. “Oh! Wooo!” he screamed celebrating. “Jesus christ. That was a lot more intense than I intended. Please tell me I was recording that, I will never be wanting to do that again.”

As he looked upon his home, he saw the massive amounts of damage the mob boss had afflicted through his explosive attacks. PewDiePie then went back to his house, and was greeted by his loyal dog. “Sven you’re safe! We did it Sven, we did it” he said. “I’m shaking. I’m not kidding. All the adrenaline. That was so crazy dude!”

Killing the Wither drops you a rare item called the ‘Nether Star’, which allows you to create a beacon. He never passed up the opportunity, using it to finally make his ‘Ikea Tower’ into one.

“Oh my god Ikea Tower! To the skies and above!” The YouTube star screamed in elation, as the beam shot up to the sky.

With that is the end of his saga with the Wither. Despite his Pig Army betraying him, he was able to fight his way to victory.