YouTube star Mr Beast held a star-studded rock-paper-scissors charity tournament, featuring some of the net’s biggest entertainers — but one of the contestants accidentally leaked his phone number during their own stream.

As it turns out, Tfue had accidentally leaked the code to get into the competitors’ chat group — as well as Mr Beast’s private phone number, as evidenced by a series of screenshots taken by fast-fingered fans.

Due to the serious leak of private information, fellow streaming star Tyler ‘Ninja’ Blevins spoke out on the matter, writing in a Tweet, “Dude Turner leaked the code to the private chat while he’s streaming.”

Ninja commented on Tfue’s apparent leak of Mr Beast’s phone number – which led to a heated argument between the two streamers.

This spurred a slew of replies from Ninja, who argued that Turner shouldn’t have been streaming the tournament at all as a means to direct his viewers toward Mr Beast’s broadcast, where they can directly donate to the charity fund.

“We’re not supposed to be streaming this bro!” Ninja replied. “The 50k you have can be donated to the main stream where people can donate to the charity. …also would have prevented the leaks.”

also would have prevented the leaks 🙁

Tfue went on to call out Ninja in a heated rant on his own stream, claiming that the Mixer streamer was going to be more offended than Mr Beast, himself.

Tfue hits back at Ninja after he criticizes him for leaking @MrBeastYT’s phone number ? pic.twitter.com/Oqln1CpdRJ

Tournament competitor and content creator LAZARBEAM also chimed in on the issue, noting that there was spam in the private tournament chat that included a slew of racial slurs. 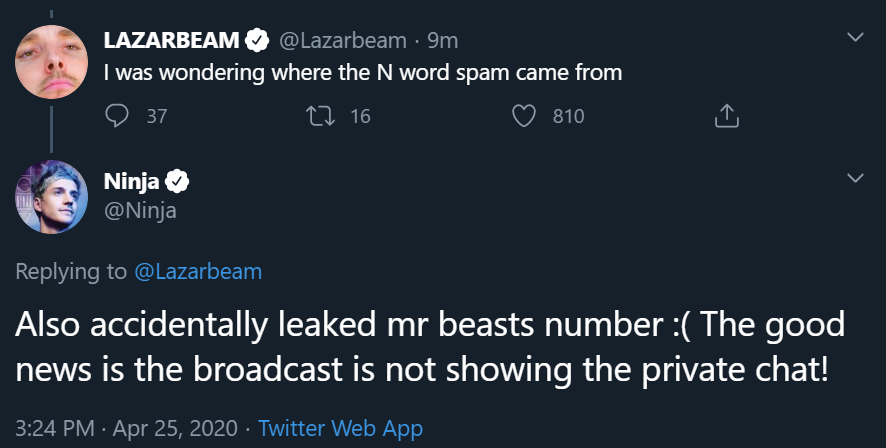 Ninja’s wife and manager, Jessica Blevins, also spoke out on the issue, reiterating Ninja’s claim that Tfue was told not to stream the tournament so as to direct viewers toward the main broadcast.

Somehow everyone was trying to blame this on @Ninja (per usual) which is why I'm saying something.

Mr Beast’s charity then froze, with Mr Beast discovering the problem on-air. Technical difficulties are currently being reviewed as the crew looks to reboot the tournament.

Tfue immediately expressed guilt at accidentally leaking the sensitive information, quickly shutting down his own stream shortly after the tournament broadcast froze.

Tfue expressed regret over the slip-up and ended his stream.

Before he ended his broadcast, Tfue clarified that he’d donated $10,000 after the slip-up, and encouraged his viewers to donate, too.

“You guys should donate, as well, to Mr Beast’s stream, so I feel like I didn’t do anything other than mess the charity fundraiser up,” he stated. “So, that’d be sick.”

As the tournament progressed, Tfue finally addressed the matter, openly apologizing before he faced off with Pokimane and asking his fanbase to donate to the cause.

Thankfully, Mr Beast took the slip-up in stride and clarified that he wasn’t upset with Tfue over the matter.

“It’s fine, the viewers are almost back to what we had,” he replied. “It’s all for charity. No hard feelings.”

Despite the technical difficulties, Mr Beast clarified there’s no bad blood between him and Tfue.

Despite all the drama, it seems that Mr Beast’s stream is nearly back to its original viewership, already having raised over $374k (at the time of writing) and even seeing celebrity guests like Jack Black in the mix of internet superstars as they work together for a good cause.