Twitch star Ali ‘Myth’ Kabbani was overwhelmed with emotion during his Fortnite stream on October 13 after he hit a certain viewership milestone for the first time in a while.

Myth boasts one of the biggest channels on Twitch, amassing a huge following with his popular Fortnite streams. He’s also performs comical impressions of other personalities on the streaming platform.

However, the battle royale player got extremely emotional during his October 13 broadcast, when he realized that he had over 30,000 viewers in his stream, and the moment left him in tears as he thanked his audience.

The Team SoloMid star had just started up a game of Fortnite when a player in his group informed him that his stream had just hit 30,000. “By the grace of God, I guess, and [the] lovely people that want to watch my stream. Holy sh*t!” he exclaimed in shock.

When one of his friends joked “I wouldn’t call them lovely…” Myth shot back. “Stop it! They are all lovely people. I’m actually getting really emotional!” he paused, before exhaling as he took the moment in.

After having time to sort his thoughts on it, the Twitch star finally addressed his audience. “The past year and a half has been the most wild experience of my life, and obviously I let down a lot of people in the Fortnite community not being able to play competitively.”

Myth than began to choke up with tears. “But um, you know, not meeting the expectations people wanted me to do…” he said, covering his eyes as he cried.

“For the longest time I was really really sad about going live, because it just didn’t feel good. And I’ve been working really hard to flip things around. So it really means a lot that so many people are here right now.”

The Fortnite pro was referencing his stream’s viewership numbers that had peaked in mid 2018 with 37k views, but has fluctuated up and down throughout 2019 despite gaining close to three million followers by 2019, according to TwitchTracker.

The Twitch star has seen a resurgence in the last two months, as his streams have been gaining more viewers alongside his insane follower growth.

The Twitch star’s views have fluctuated since 2018, but he’s seen a resurgence in 2019.

Myth continues to be one of the most popular personalities on Twitch, and with his comedic sense of humor, to his Fortnite skills, his channel is currently one of the most followed on the streaming platform.

As of the time of this article, the Team SoloMid star has over 5.4 million followers, and doesn’t show any signs of slowing down.

Pepe the Frog is one of the most well-known and widespread memes around, and over the decade and a half he’s existed, it’s also one of the most interesting stories the internet has to offer.

Created back in the long-long ago of 2005 by cartoonist Matt Furie, Pepe first appeared in a comic called Boy’s Club and wasn’t much more than a recurring character there for the first bit of his life.

It took a few years, but in 2008 memes featuring the amphibian started getting popular on MySpace and 4chan, with just a few variations in these early days like “sad” “smug” “angry” and various types of “feels”. It was certainly a much simpler time.

The “feels good” Pepe was one of the most common variations in the early days.

In the first half of the 2010s, Pepe only continued to grow in popularity and fame. Twitch, Twitter, Reddit, no matter where you went online it seemed like the frog was everywhere, but the good times couldn’t last. Controversy, that hasn’t gone away even today, was just on the horizon.

Pepe was originally created by Furie as having no political affiliation whatsoever but in the run-up to the 2016 United States Presidential election, he became a symbol for certain online groups and was labeled a “Hate Symbol” by various U.S. organizations, including the American Defamation League (ADL).

He’s still around today though, and that’s because the Pepe meme itself isn’t bigoted at all, but the context of use is an important consideration.

“Because so many Pepe the Frog memes are not bigoted in nature, it is important to examine the use of the meme only in context,” the ADL website says. “The mere fact of posting a Pepe meme does not mean that someone is racist.”

Just don’t test your luck throwing out frogs in Overwatch League chat, as the competition completely banned the meme back in 2018 (and even fines players caught using it to this day). 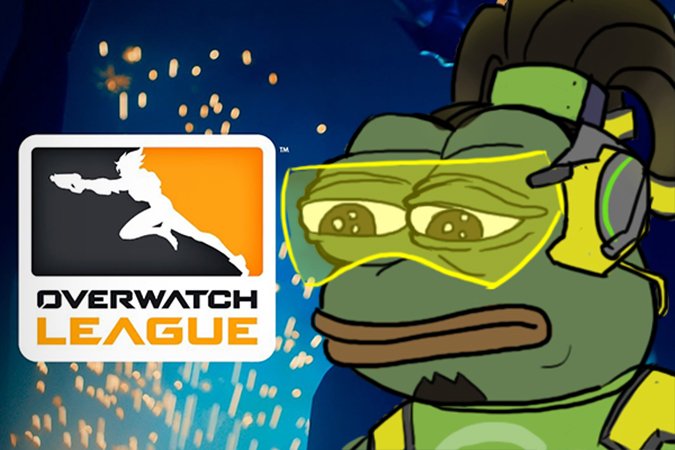 Really, you could write a book on all of the different variations that appear as emotes on Twitch alone, and that’s not even touching the countless “rare” Pepes that have been minted over the years either. To keep things simple, we’ll just focus here on some of the most common specimens you might encounter while browsing Twitch. 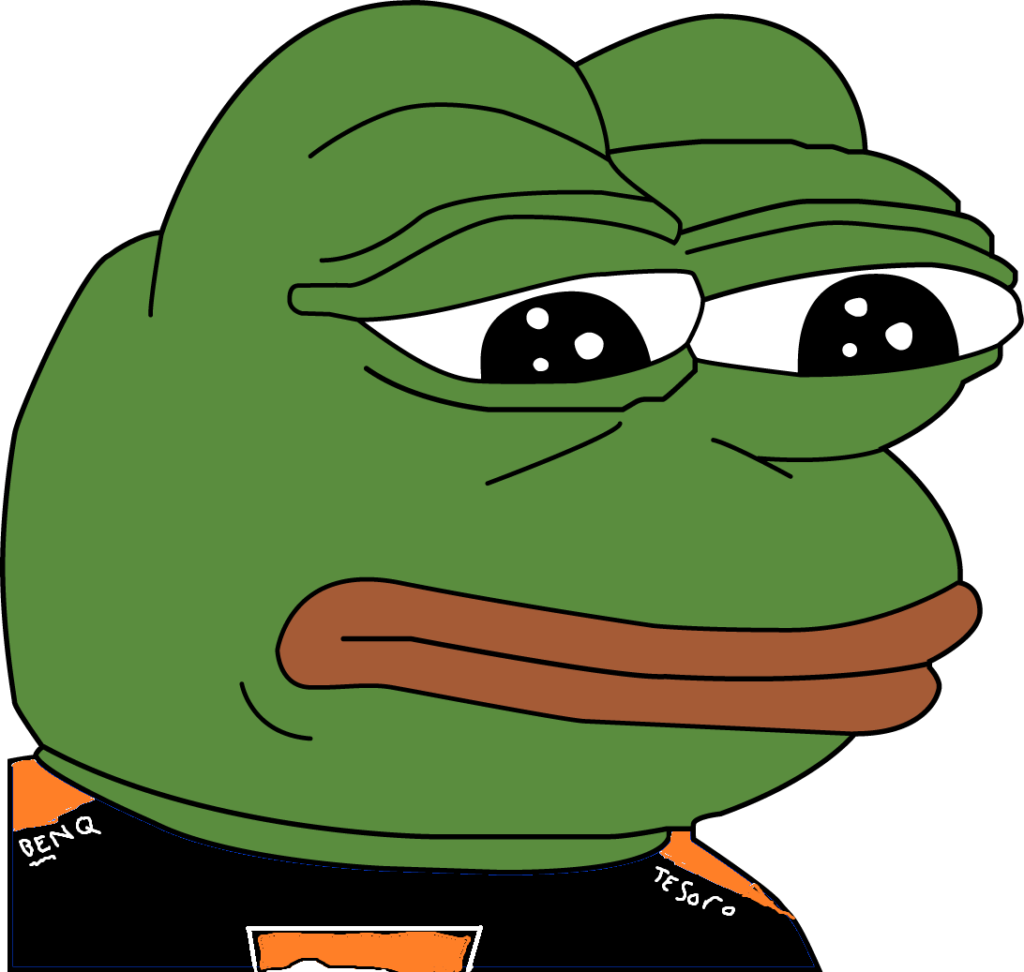 When Virtus.pro stops being Virtus.plow.

This is basically Pepe 101, a common reversal of the famous “feels good man.” Feelsbadman can be found all over Twitch when a streamer encounters something sad. Maybe the game you’re looking forward to still doesn’t have any updates? That’s a feelsbadman (looking at you, Overwatch 2). 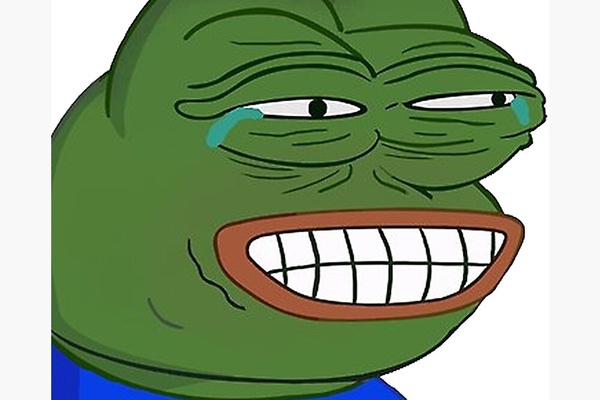 Something funny? Throw a pepelaugh in chat.

If the name wasn’t enough to fill you in, this Pepe is barely able to contain his laughter. You’ll find it anytime something humorous happens on stream, or when chat knows something the streamer doesn’t. 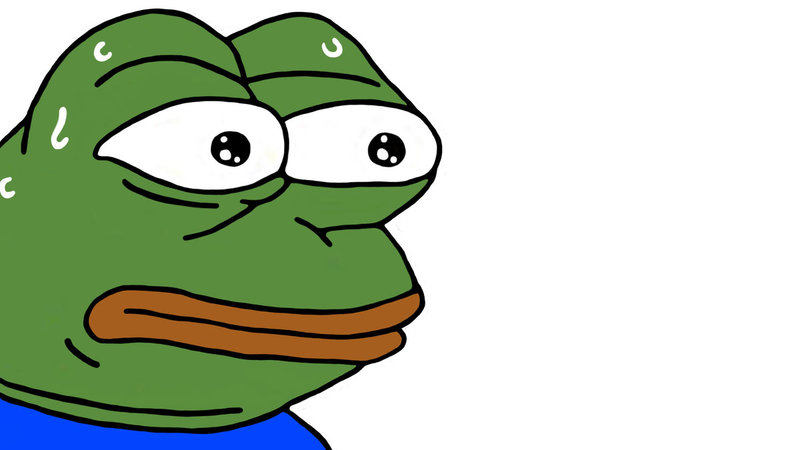 Monkas: perfect for when things get sketchy.

When things get tense, and the anxiety starts building, there’s no better emote to pull out then MonkaS. If you’ve ever wondered how it got its name, it’s actually really simple. On March 16th, 2016, Twitch user Monkasen uploaded the emote to the Better Twitch TV browser extension. Monka – for the user, and S – for scared. 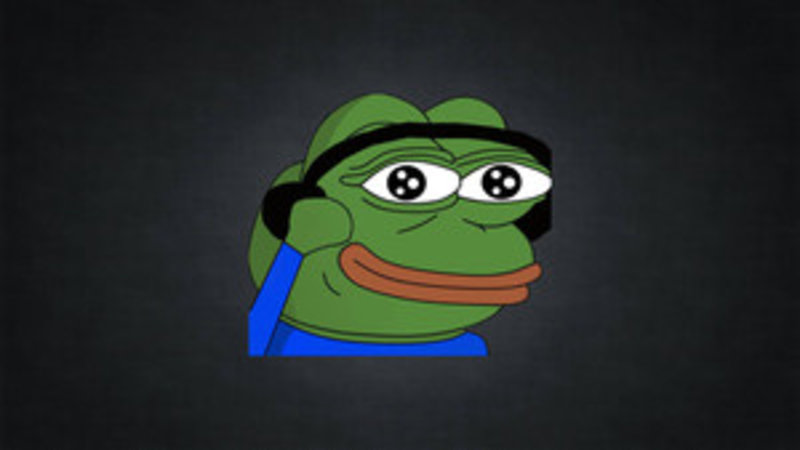 When your tune comes on, or the Fallout music hits just right, you know it’s time for PepeJAM. Pretty straightforward here, with headphones over his ears, and animated versions have him bouncing up and down. 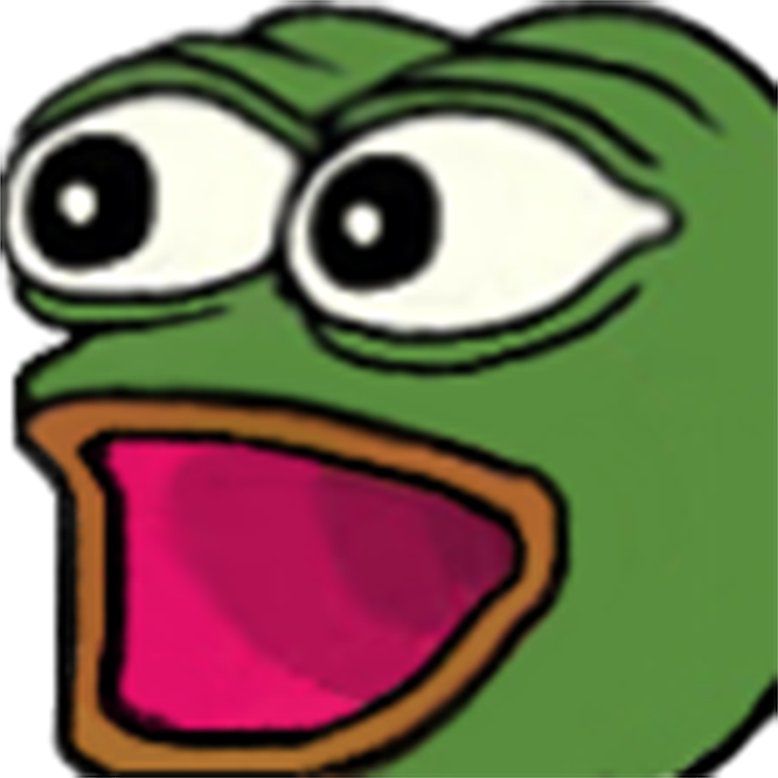 At first glance you can probably guess the inspiration behind the ‘Poggers’ emote. That would be the longstanding ‘Pogchamp’ emote, that Twitch recently changed to feature a different streamer every 24 hours. It usually faces left, instead of right like the original emote, but animated versions can also be found flipping back and forth. 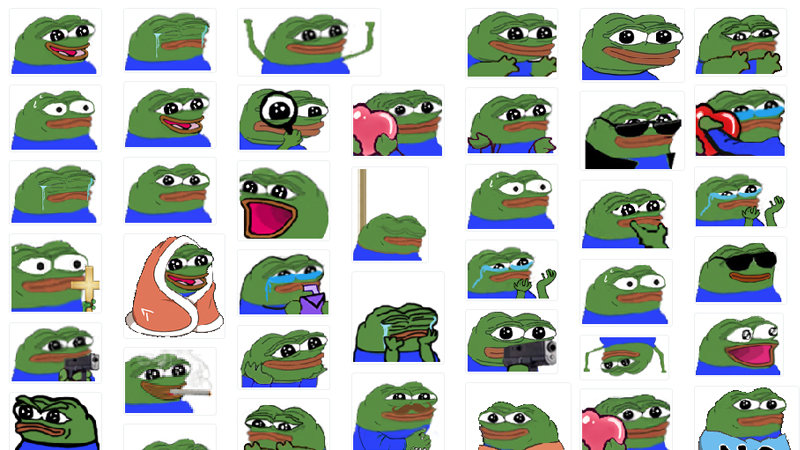 Despite a similar appearance, Peepo is NOT Pepe, they are two different frogs.

Peepo emotes seem to just keep getting more and more popular on Twitch since they started popping up in 2017 (and we can see why, as the little guy is undeniably cute). But a common misconception is that these are just poorly drawn Pepes. They’re not!

Peepo is instead a descendant, derived from the poorly drawn Pepe named Apu Apustaja (“Help Helper” in English) that first appeared on Finnish message boards before he made his way to Twitch. He can be used in just as many situations too, so expect to see plenty of him.

The humble internet frog Pepe has been on a wild ride over the last 15+ years, but he and his offspring like Peepo don’t seem to be going away anytime soon. Even though the edgy Pepes will undoubtedly continue, it will be very interesting to see how the meme evolves by the time he reaches 30.