Jimmy ‘Mr Beast’ Donaldson is calling on fellow content creators to help him make their own YouTube Rewind, following the Google-owned company’s recent cancellation of the yearly recap in November.

Love or hate it, YouTube Rewind has become a major part of the video platform. The annual recap happens every December and takes a look back at the entire year to highlight popular trends and content creators.

Unfortunately on November 12, the Google-owned company announced they were “taking a break” for 2020. Not letting it stand, the site’s rising star Mr Beast has announced he is making his own, and is asking for help.

The popular YouTuber is going to make Rewind 2020.

Mr Beast rallies YouTubers to make their own 2020 Rewind

Rewind initially launched in 2010 as a simple list of the top 50 most popular videos. The recap has evolved over the last decade, and eventually became a major budget production featuring the platform’s biggest creators.

However in November, YouTube announced they were cancelling the event, stating, “2020 has been different. And it doesn’t feel right to carry on as if it weren’t. So we are taking a break from Rewind this year.”

Mr Beast reacted to the decision on Twitter, and said he would make his own. “Since YouTube isn’t making a rewind this year, I’m going to 🙂 If any other creators want to help just reply! I’m going to need it,” his November 17 tweets read.

If any other creators want to help just reply! I’m going to need it 😂

Within minutes of posting, some of YouTube’s top creators replied to Donaldson’s tweet wanting to chip in to his Rewind 2020 project. Popular tech reviewer Marques ‘MKBHD’ Brownlee offered his production assistance. “I volunteer to help production or literally whatever else can make this great,” he said. 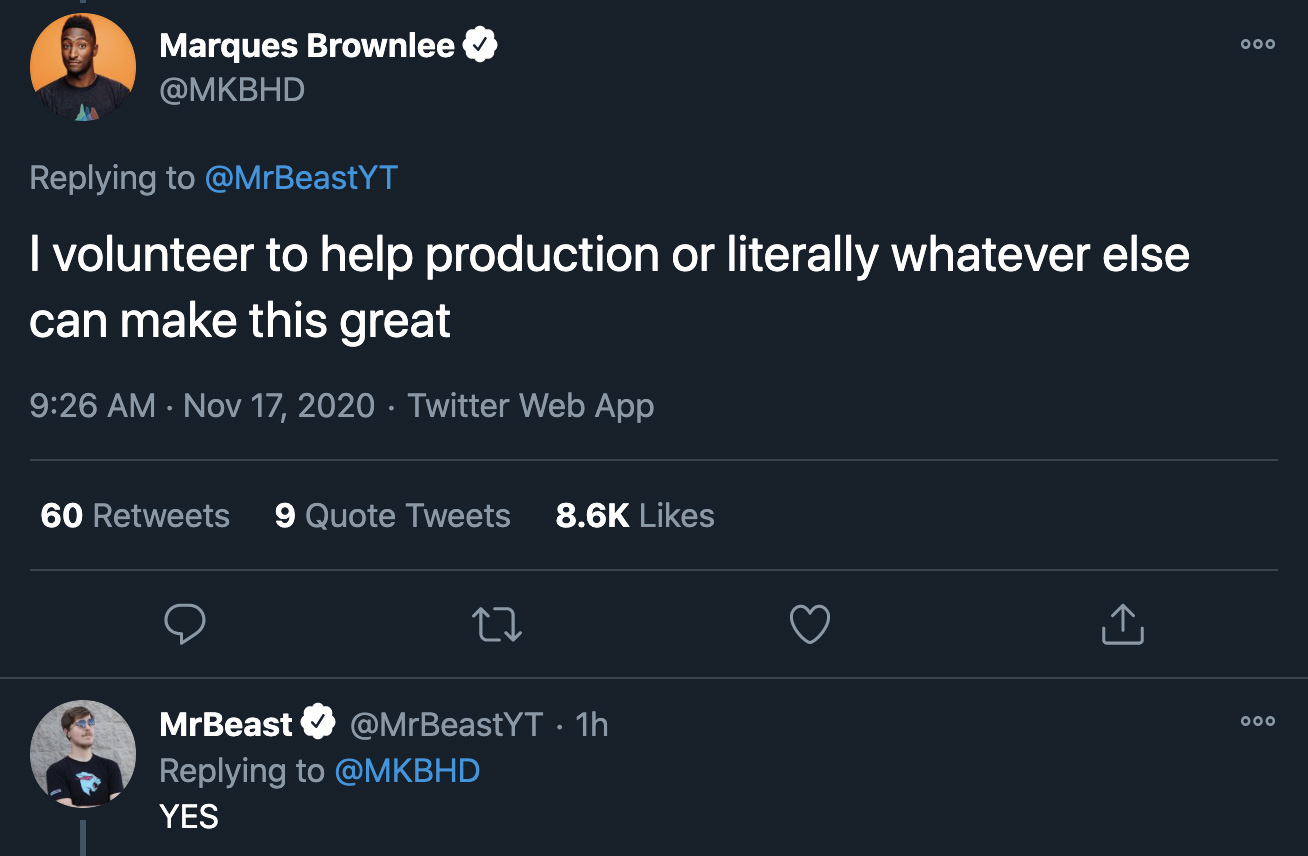 “Pls make it cringey! I miss the good cringey rewinds,” he joked.

Given Mr Beast’s track record of continually one-upping his already insane videos, it will be interesting to see what he can come up with for Rewind 2020. With some of YouTube’s top tech reviewers offering their assistance, we could get something epic.

This isn’t the first time Donaldson has rallied to bring the community together. In April, he hosted a live stream where the platform’s biggest creators faced off for a Rock Paper Scissors competition for a $250k prize.

TikTok star Giulia Amato has hit out at fans on TikTok for constantly comparing her to Addison Rae and other influencers, claiming that it feels like she has been “given a different identity.”

Since launching her channel in April 2019, 17-year-old Giulia Amato has made a name for herself on TikTok. As well as having an impressive 1.8 million followers, her content — which includes dances, lip-syncing and POVs — has helped her amass nearly 55 million likes on the app.

However, with many fans noticing Amato’s striking resemblance to TikTok superstar Addison Rae, her comments are often flooded with comparisons, and she’s faced accusations of copying Rae in the past.

For example, in October, Amato was accused of “copying” Addison Rae after dying her hair back to its natural brunette color shortly after Rae dyed her own hair brown.

In this TikTok, it is clear that Amato has had enough of the comparisons. She captioned the clip, “my name is Giulia Amato and I don’t want to be compared to other people everyday.”

Clearly referencing the Addison Rae comparisons, Amato continued: “So by now, you guys all know who I’m compared to. I don’t want to say her name because I don’t want it to look like I’m using her name to get clout for this video, but you guys know who I’m talking about.”

She elaborated even further: “My videos were, at first, filled with a lot of hate, with a lot of people comparing us, and that I can handle.”

“But I feel like it’s become a trend t0 give me different identities.”

Amato said in the TikTok that she finds herself being constantly compared to Addison Rae, who is currently starring in a remake of the movie ‘She’s All That.’

Noting how she’s recently been compared to a “mix” of Rae and “two or four” other high-profile TikTok stars, Amato asserted in the video that, contrary to accusations in the comments, she has never had cosmetic surgery or other treatments done to her face.

Sympathizing with Amato’s frustrations, fans on Instagram showed their support. One user said in a comment that got over 4,000 likes that “they are both gorgeous,” while another user said that fans should stop comparing because “we are all beautiful and have our own blessings, so no need to be jealous of each other.”

It appears that Amato has since deleted the TikTok from her account.