Popular YouTuber Logan Paul has done numerous hijinks throughout his career, but his latest one saw him getting a Pokemon tattoo that might not have turned out to his liking.

Logan Paul and his Maverick squad are known throughout YouTube for insane videos filled with lighthearted humor and questionable rowdiness, but his latest entry in a long line of spur of the moment decisions will stick with him forever.

Paul had committed to getting a tattoo prior, but surprised fans when he revealed that the tattoo would be of Squirtle donning his Squirtle Squad glasses, but all didn’t turn out so well. 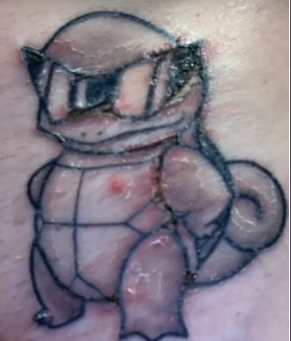 His tattoo before the touch up fix.

Paul decided to place the tattoo above his groin near his left hip, which the tattoo artist admitted the spot tends to “burn” when getting inked.

The 23-year-old comedian braved the ordeal, and after waiting for the tattoo to heal discovered it wasn’t the best it could be.

“[After] another night of complete degeneracy, here we are about 40 hours later and the Squirtle tattoo is looking absolutely disgusting,” Paul said.

(Timestamp of 3:44 for mobile viewers)

He said that the tattoo had scabbed over a few parts of the design, making the final product was a bit terrifying to behold.

The YouTuber actually had to go back to the shop in Miami to get some of the parts touched up, but still thought the design was “half-assed.

As disappointed as Paul was with his tattoo the ordeal was incredibly funny seeing how it was his first time getting some ink and judging by how the experience went, it could be his last.