Fans of OfflineTV will be aware that LilyPichu and SleightlyMusical have been dating for some time. However, a number of tweets on November 10, including one from fellow member Imane ‘Pokimane’ Anys, fuelled speculations about their relationship.

Pokimane tweeted that it was “insane how the best of people can turn out to be massive snakes,” and following conjecture from fans online, the streamer has acknowledged the situation and the rumors.

it’s insane how the best of people can turn out to be massive snakes :snake:

In a tweet in which she stated that she felt “forced” to make a statement, LilyPichu wrote: “Albert and I aren’t together anymore. I didn’t know if I should share it (or) how to share this, and was stressing out about it, but at this point it doesn’t matter. I’m too sick and tired.”

With some criticizing OfflineTV members for tweeting about the break-up, the 27-year-old apologized for her friends, before asking people to not “spread any more hurt to anyone,” and accepted that many will continue to speculate about the end of their relationship.

“I am already heartbroken,” she concluded. “I still love and care about my friends and (Albert) very much.” 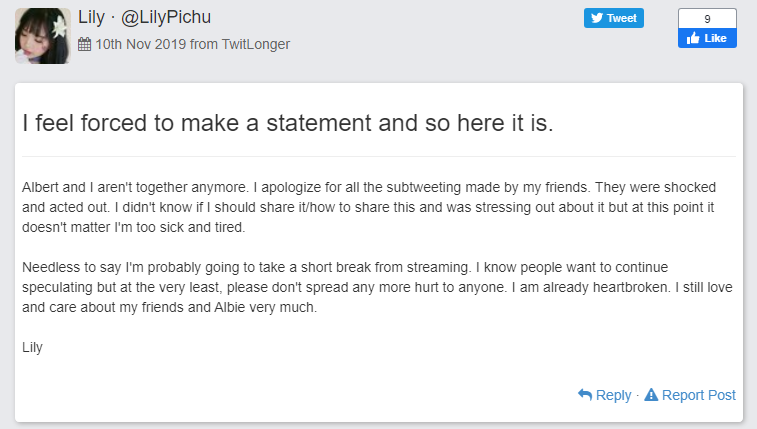 Federico ‘Fedmyster’ Gaytan and Pokimane both apologized for their tweets, with Fedmyster deleting his about the situation, writing that what they had done was “very irresponsible,” and that the entire group were “pretty torn and upset for Lily.”

Pokimane agreed, saying that she did “not think (her) actions would signal to others that it’s okay to talk about this publicly,” before confirming that she has said sorry to LilyPichu privately.

I'd like to add on & say I completely agree, at the time I did not think my actions would signal to others that it's okay to talk about this publicly, because it's not, and I'm sorry for that. I've apologized to Lily privately, because I want her feelings to be our priority♥️

Both SleightlyMusical and LilyPichu are currently in Japan as part of an OfflineTV trip there, but the streamer, who regularly plays music and performs magic tricks for his audience, has yet to comment on the end of the relationship.

LilyPichu has confirmed that she will be taking a short break from both streaming and social media while she processes the situation, saying that she “is not in the best mental state right now,” before apologizing for anything she said wrong.