Former Fear Factor host Joe Rogan took a shot at the trend-setting Off-White shoe brand during a January 7 episode of his podcast “The Joe Rogan Experience.”

Rogan brought up the brand while talking about buying new shoes for his child, questioning during his podcast why they came with a tag that people prefer not to remove. 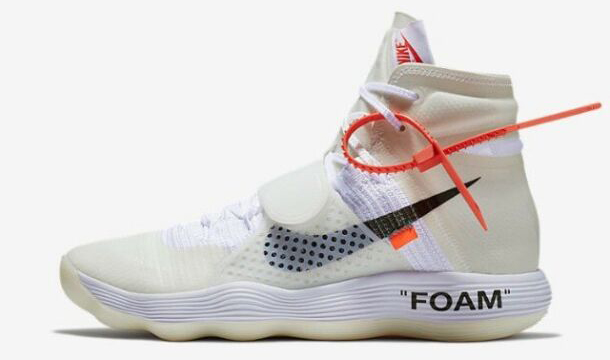 Off-White shoes can fetch some high prices, like this pair going for over $1,600 on eBay.

“I was buying a pair of Nikes for my kid, and they’re like, ‘oh those are Off-White,’ and I’m like, what’s up with this green thing?” Rogan told his co-hosts. “They’re like ‘oh you leave that on.’ F*ck you, I’m not leaving this stupid plastic tag on.”

“These are huge, they’re cumbersome, they look dumb,” Rogan continued about the tags. “But they wear them on their shoe. It’s part of the thing, it’s part of the brand.”

After one of his co-hosts tried to reassure Rogan that the trend would be gone in under five years, the host still wondered why it was even here in the first place.

“Why is it here?” Rogan asked before joking about how he would end the fad. “We should go up to these f*cking kids and just cut that off and go, ‘No, we’re about to go to war. They’re making you soft and stupid.'”

He also had an interesting theory about the true origins of the fashion trend, facetiously suggesting it was made to undermine American youth.

“This is probably a plot by the Chinese, the Russians and the Iranians to try and make sure our kids grow dumber and dumber,” Rogan joked. “Probably something that started out on Instagram by one of those IRA, Internet Research Agencies. That’s the people that make all the propaganda from the Russian troll farms.”

Rogan has discussed shoes several times before on his podcast.

A video from Off-White about the zip ties from 2017 says that there are two ways to deal with them: either cut them off or leave them alone  (super helpful advice).

Rogan isn’t the only one confused by the fashion statement, either: Pop star Justin Bieber was actually stopped by police who thought he had stolen his Off-Whites, since the tag could pass for some kind of security device.