In a YouTube video and a series of TikToks, YouTube personality Trisha Paytas has publicly called out “evil” Jeffree Star and his hairstylist HairbyJay following a tense trip to Las Vegas earlier this year.

In a YouTube video entitled “Why I’m scared of Jeffree and HairbyJay,” Paytas explains that she was left “hurt and disgusted” during the Valentine’s Day vacation – so much so, she even went home early.

Claiming that Star, HairbyJay and other guests spent the “awful” trip making fun of her weight, skin, spending and appearance, Paytas said: “Jeffree brought me on a trip to s**t on me and I can’t have a say because he paid for it.”

“They think they can just do that, that if you go on trip someone paid for they’re just allowed to p**s on you,” she continued. “In front of my face and behind my back.”

Hitting out at former friend and YouTuber Shane Dawson, Paytas criticized him for “constantly promoting” Star even though he has treated her poorly in the past.

She also claims that during the trip, HairbyJay overcharged her for wig services, but because she was “genuinely scared” of him, she paid anyway.

Breaking down in tears, she also showed a snippet of HairByJay’s Instagram live during her YouTube video, in which he calls Paytas a “stupid dumb b***h” and says that she should go on a diet because “all that fat is f*****g her brain.”

Jeffree later took to Twitter in response to these accusations. Claiming that he is “horrified” by what HairbyJay said during his live, he maintained in a Tweet addressed to Paytas: “let’s not pretend I had any part to play in that.”

Claiming in subsequent Tweets that Paytas had ignored his attempts to reach out to her, he continued: “I’ve already said my piece to her and if she ever wants to call or text me back, she will. ”

“What Jay said on live was f*****g disgusting and does not reflect how I’ve ever felt.”

Responding to Jeffree by quote tweeting one of his comments about the situation, Trisha also said, “if you didn’t want to be involved in the drama why is he speaking your name in the video on your behalf? Confirming all the horrid shit you guys said about me?” 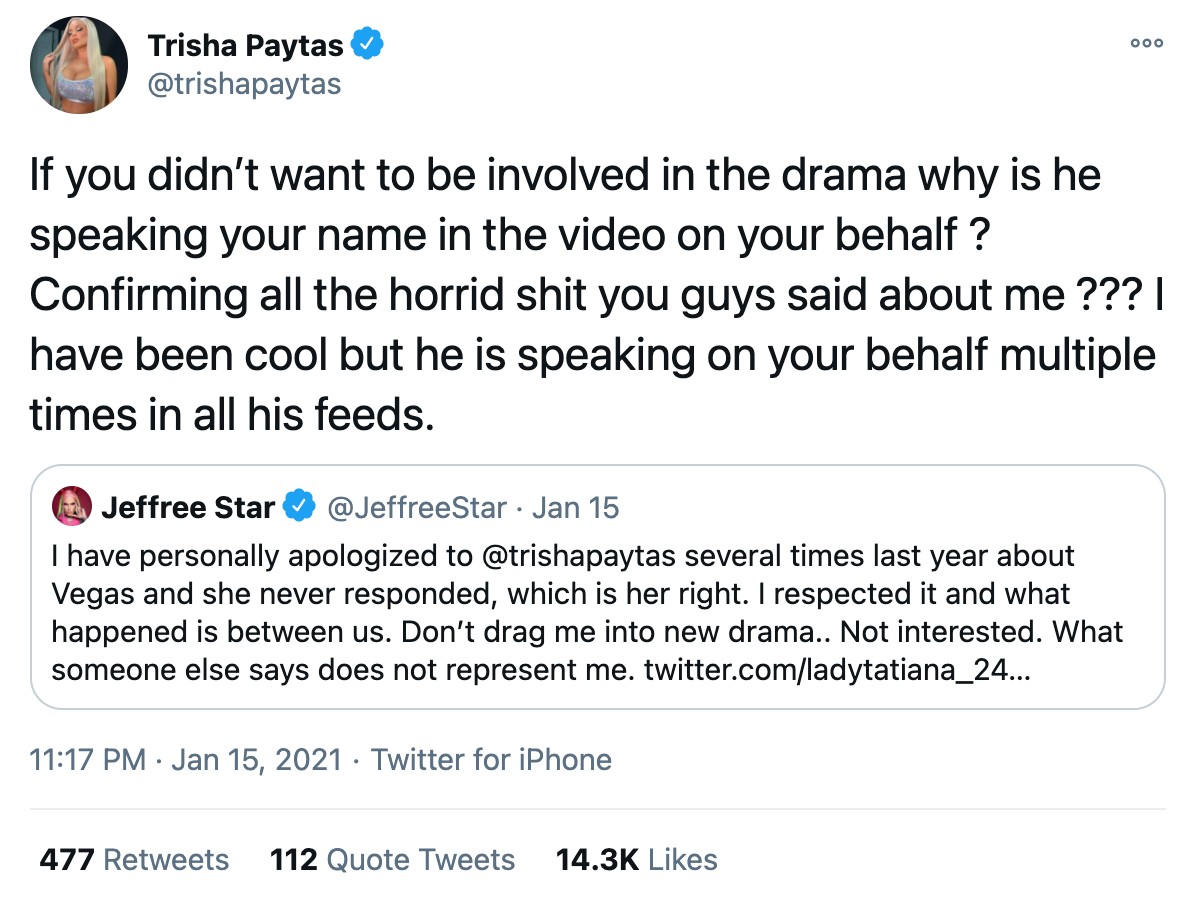 She ends by saying “I have been cool but he is speaking on your behalf multiple times in all his feeds.”

On January 17 Jeffree also tweeted “Goooood morning to everyone except the guy that used to do my hair,” which some fans have suggested implies that Jeffree has cut ties with HairbyJay as a result of the backlash, though this has not been explicitly confirmed.

Shane Dawson also started trending on Twitter after fans noticed that he and Trisha had unfollowed each other, with many initially claiming it was Shane and partner Ryland Adams who made the first move. Tweets went viral speculating about the state of their friendship, having publicly spoken about their close relationship in the past. 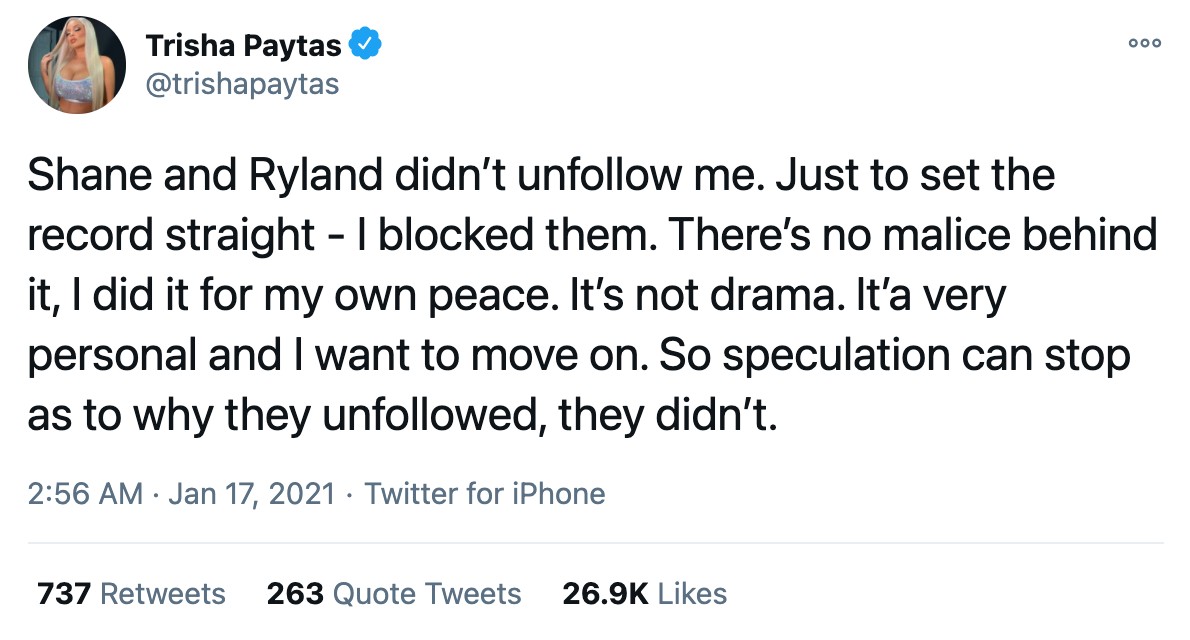 However, Trisha disputed these claims by tweeting “Shane and Ryland didn’t unfollow me. Just to set the record straight – I blocked them. There’s no malice behind it, I did it for my own peace. It’s not drama. It’s very personal and I want to move on. So speculation can stop as to why they unfollowed, they didn’t.”

Several names involved in the situation continue to trend on Twitter, and fans have been divided over the various social media stars’ responses to the situation.