IRL Twitch streamer ‘robcdee’ saved an unsuspecting tourist from a potentially dangerous scam on the streets of Tokyo, and it happened live on the broadcast!

Rob, an Australian streamer who documents his travels around Japan on Twitch, was contemplating heading into a sports bar on May 14 when he noticed a tourist being led to a club nearby.

Due to his experience traversing the land of the rising sun, the streamer had a feeling the tourist could be about to be scammed and asked his chat what he should do.

In the past, Robcdee has made a habit of “saving” tourists in awkward situations being aggressively hit on by strangers and even kids who have lost their parents.

After chat urged the streamer to attempt to save the stranger, Rob took off on his bike and whispered to the potential club goer that he was “being scammed.”

“You’ll lose like, a grand,” he informed the man.

“Oh yeah?” the stranger questioned back.

Rob caught up with the man before he entered the club.

“Yeah,” Rob replied and hurried back to the sports bar.

While it’s unclear if the man was definitely going to be scammed, or whether there was any trouble at all, some users on Reddit speculated that the tourist may have been walking into a trap, one involving the potential use of drugs.

“Dudes get baited into going into bars where they’ll supposedly meet beautiful Japanese women who would love to chat/drink with them and they end up getting scammed,” user TheEmoWalrus chimed in. 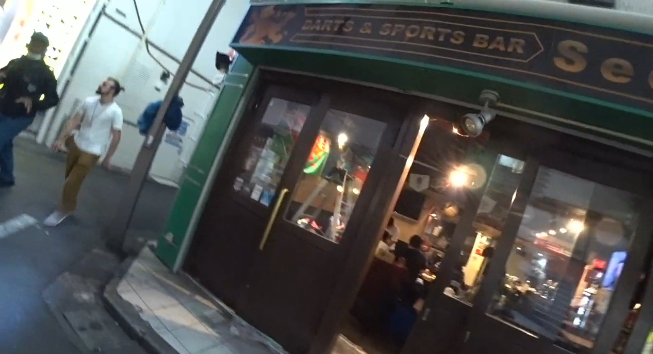 Rob wanted to save a stranger from potentially scammed in a Japanese bar.

“Usually involves a drugged drink and they run your cards/go through your wallet while you’re passed out. If you try to leave they might also rough you up a bit to make you pay,” the user continued. “Sadly a lot of people who come over don’t do their research on stuff like this and think that since Japan is so safe that stuff like this doesn’t happen.”

Whatever the case, it would seem like the “Angel of Shibuya” was able to keep the stranger from the club and with his money intact.