Popular Instagram influencer Carolin Calloway has become one of the most talked-about people on the internet seemingly overnight, after a damning article posted by a former friend, and has now responded to the ongoing backlash.

Calloway is known mainly as an ‘Instagram personality’, with over 790,000 followers on the platform and growing fast.

The cause of this growth is partly due to an article posted by her former friend and ghostwriter Natalie Beach, who gave an in-depth account of the pair’s turbulent relationship.

It is alleged by Beach that she was ghostwriting many of Calloway’s captions. Beach was also apparently “financially dependent” on her, and at one time, Calloway essentially left her homeless after taking away her summer housing.

Although the article is highly critical of Calloway, she didn’t shy away from it, instead imploring both her supporters and detractors to read the article, in a showing of sympathy for Beach.

However, Calloway has now revealed that she plans to tell her own side of the story in a response article, to be posted on the same New York Magazine vertical, The Cut.

In an Instagram post on September 12, she writes: “You may not like it or think that it’s important or say that I’m manic or spiraling or melting-down. And that’s fine. You’re entitled to your opinion although I ask kindly that you go express your concern somewhere else.” 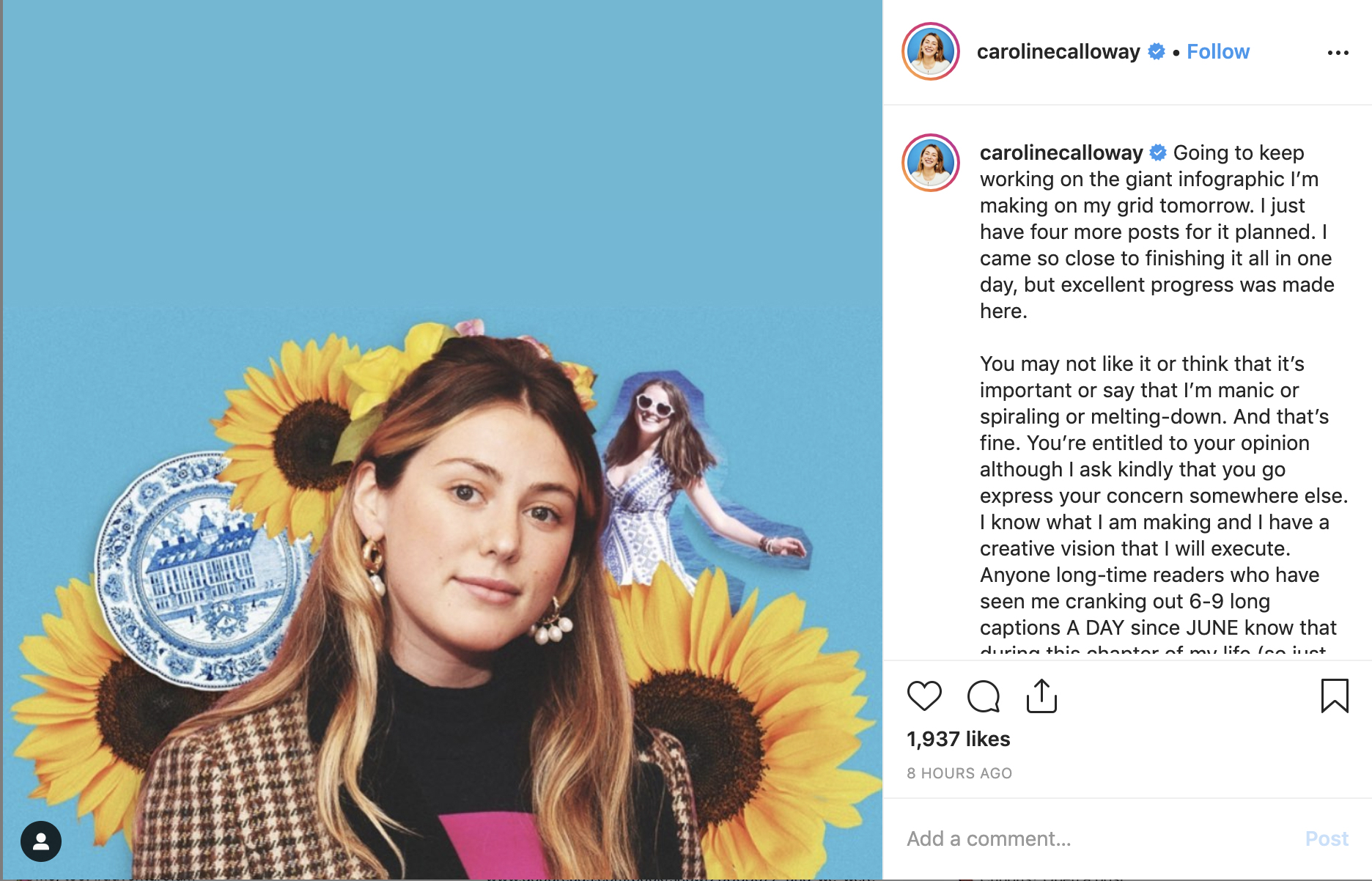 Calloway’s response on Instagram, finding herself in the eye of an internet storm.

She concludes by saying, “Now if you’ll excuse me I have to get back to writing my response for @thecut. Working title: “I Am Caroline Calloway.”

She had already been given forewarning that the article from Beach was coming, and had fully supported it, writing “You should read Natalie’s article when it comes out,” although her team had advised her not to bring any attention to it.

Do you guys have any friendships that have ended that still bring you pain? This afternoon I found out that one of the two people I have hurt the most in this world will be publishing an essay about our friendship for The Cut. I don’t know when this essay will go live. But it will be different than the articles that called me a scammer for clickbait. Everything in Natalie’s article will be brilliant and beautifully expressed and true. I know this not because I have read her essay but because Natalie is the best writer I know. I still love her. Our friendship ended 2 years ago, but I still walk around New York sometimes, listening to music, running errands, thinking about her. Amsterdam. I’ll let her tell you about that trip because it put her in danger—not me—so maybe it is hers to tell. Maybe she has custody of that story. Sometimes I all but gag with guilt. Sometimes I write emails to her in my head. Sometimes I imagine a future where we’re friends again! Natalie suffered all the consequences of being loved by an addict and none of the benefits of being loved by the woman that recovery made me into. In early August Natalie liked one of my Instagram photos by accident. I knew it was by accident because I know Natalie. But still! I thought: Maybe she is checking in on me because she still wants to be friends! Maybe she still loves me, too. I realize now that she must have been working on the article about us that will be published soon by New York Magazine. My team asked two things of me: To ignore this essay in my posts so I don’t drive traffic to it and to give them Natalie’s email so they could reach out. This is the first time I’ve disobeyed them. You should read Natalie’s article when it comes out. I’ll post a link when it does. Go leave a comment on nymag.com even if it’s insulting me. Every digital impression will be another reason for The Cut to hire Natalie again and to pay her even more next time. And The Cut doesn’t have access to the audience most interested in hating and loving Caroline Calloway. I do. So start anticipating this article. Get excited. Read it. I hope I can support Natalie now in ways I never did during my addiction.

Who is Caroline Calloway?

This is not the first Caroline Calloway controversy, although it is her most prolific.

First rising to fame in 2015, signing a major book deal for her memoir entitled ‘AND WE WERE LIKE’, published in the UK, US and France, which earned her a reported $500,000.

Her biggest controversy, perhaps until now, came in 2018, when she threw a “creativity workshop” in New York, but the event was criticized by attendees and fans who said they were not given the experience promised. Calloway refunded tickets and canceled planned tour stops for the workshop in other US cities.

Since then, Calloway has continued to grow her following on social media, but there’s now questions being raised about how much of this growth is owed to her former friend.

How to change server in Apex Legends to fix lag on PC, PS4 & Xbox