Popular Twitch streamer and internet personality Guy Beahm, otherwise known as Dr Disrespect, has broken character to officially deliver a response to his bans from both Twitch and E3 2019, after broadcasting in a public bathroom at the event.

Beahm posted a Twitlonger link from his personal account on July 1, nearly two weeks after his ban on June 12.

“I’d like to talk about Dr Disrespect’s Twitch ban from E3,” he wrote, addressing his persona in the third person.

I'd like to talk about Dr Disrespect's Twitch ban from E3.

Beahm’s Twitlonger post, as shown below, attributed his “mishap” to occuring during his first-ever IRL stream in character as the Doc – a persona that he wanted to go “all in” with during his first real-life broadcast.

“When we were walking around filming at E3, we clearly weren’t thinking about the laws/repercussions of filming in the bathroom because honestly, it wasn’t in our mind frame at the time,” Beahm explained. “We were sort of ‘all in’ with the Doc livestream experience and capturing the E3 event through the character. We were so into the E3 IRL journey that we became a little blind in what’s ok and what’s not ok.” 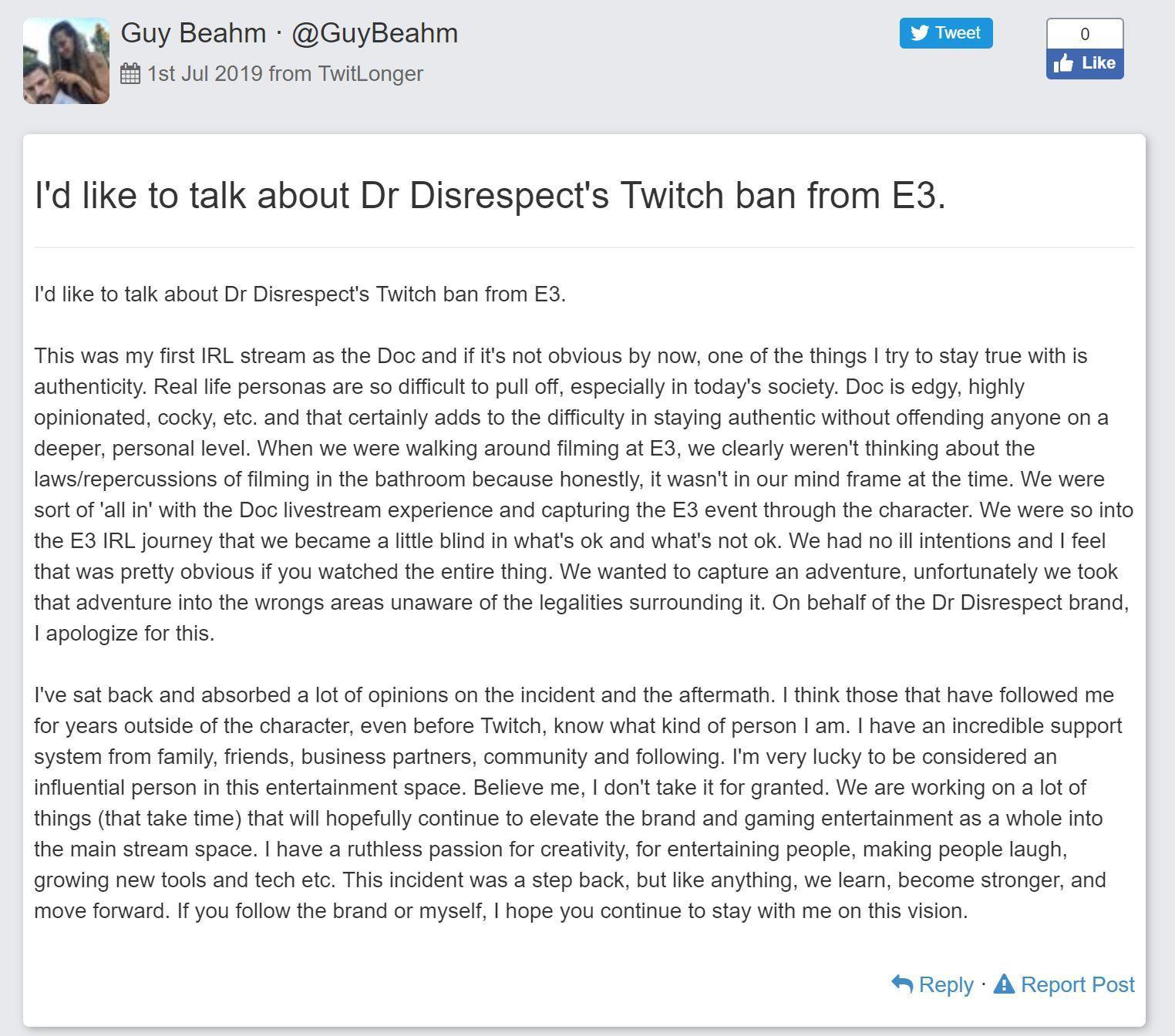 Beahm went on to deliver an apology on behalf of his brand, and labeled the incident a “step back,” asking his fanbase to stick with him as he continues his streaming career.

“This incident was a step back, but like anything, we learn, become stronger, and move forward,” he wrote. “If you follow the brand or myself, I hope you continue to stay with me on this vision.”

Guy Beahm spoke out on behalf of the Doc’s E3 and Twitch bans in a Twitlonger post on July 1.
600[ad name=”article4″]

While the Doc uploaded a humorous video recapping his E3 experience on June 13, he was relatively silent about the matter, revealing that his manager had been fired amidst the debacle – which caught the attention of major online personalities, in the process.

The Doc later announced his return to Twitch on June 27, with a humorous video skit that revealed his comeback for July 8.

While fans are already chomping at the bit for his return to the platform, it looks like Guy Beahm is taking some well-needed time off to reflect on his bathroom streaming debacle, as evidenced by his July 1 statement on the matter.